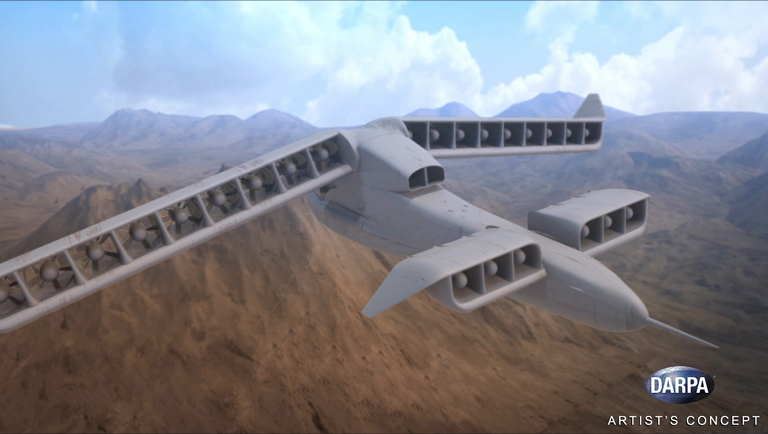 American defence agency DARPA has just unveiled the concept for its new VTOL (Vertical Take-Off and Landing) vehicle, the X-Plane, which will offer the ability to seamlessly transition from hover mode to forward flight thanks to two large 'wings' of fans.

DARPA's (Defense Advanced Research Projects Agency) Experimental Plane will be an evolution of current current VTOL designs, such as the V-22 Osprey and the F-35B Lightning II, and will aim to provide the best balance so far between speed, distance of flight and maneuverability.

VTOL's have always had to make a trade-off between these issues, but the X-Plane is aiming big with the hope of achieving 300 to 400 knots in sustained speed, improve hover efficiency from 60% to 75% and carry a load of at least 40% of its planned 4,536kg gross weight.

"Just when we thought it had all been done before, the Aurora team found room for invention - truly new elements of engineering and technology that show enormous promise for demonstration on actual flight vehicles," says Ashish Bagai, DARPA program manager. "This is an extremely novel approach,” Bagai said of the selected design. “It will be very challenging to demonstrate, but it has the potential to move the technology needle the farthest and provide some of the greatest spin-off opportunities for other vertical flight and aviation products."

The contract for its construction has been awarded to American aviation contractor Aurora Flight Services (AFS), which aims to get the X-Plane up into the air sometime in 2018.

Why not check out: New hydrogen-powered drones could end up flying for hours, not minutes