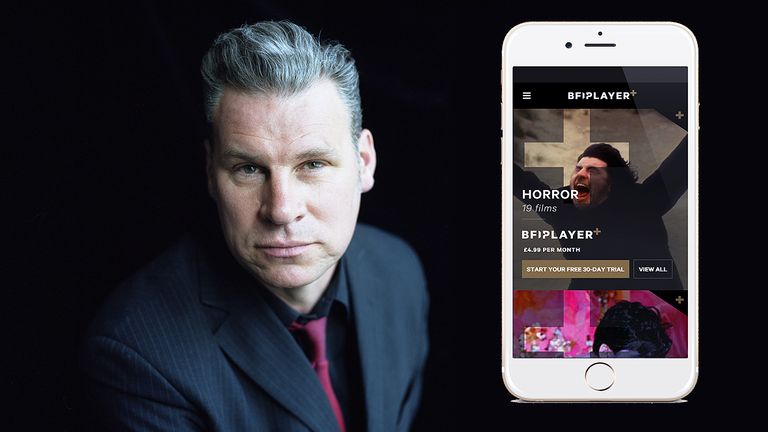 Alongside Mubi and Curzon Home Cinema, the BFI Player+ website and app offer a far more independent, thoughtful, black and white, experimental (and so on) spin on movie streaming.

Now the BFI has recruited zoot suit-wearing, northern-nightclub-bouncer-resembling movie critic, friend of Simon Mayo and scourge of Hollywood crap Mark Kermode to tout its wares. He's doing short introductions to some of the illustrious films on its list in a bid to lure you into watching some of his favourites. We spoke to Mark about why streaming is bad news for mainstream films, not indies, and why watching 2001 on a phone is incomprehensible to him, but hey, if that's how you roll, you go right ahead.

These are the words he said to us.

I got asked to do this about this three months ago…

When they were in the process of putting together BFI Player+. I had done curated introductions before for Film 4's Extreme Cinema and in the past, they used to be much more commonplace. Everyone remembers Alex Cox doing Moviedrome, and then Mark Cousins. Mark Gatiss and Kim Newman did them, but for whatever reason that seemed to fall by the way. A lot of us had been talking, in fact, about how great it would be to be able to do that stuff again.

"The BFI said, “Look we've got this very good list of flms” – and they really have; it was a genuinely fantastic catalogue, put together by cineastes who have a sense of the history of cinema – “… Would you be interested in doing introductions for them?” And I was in like a shot.

"We're filming the first two intros today so it's very early days but the idea is the list will grow and I would hope I'd be involved in discussions around that but then looking at the list today it is fairly astonishing, and it's not like there's any part of me that thinks, “I wish it had this, that or the other,” it's more like, “Wow.”

So the first two are Hitchcock's The Lodger…

I wanted to start with something silent. I'm very interested in silent cinema and there was a lovely soundtrack done for it three years ago and obviously I play in a band that accompanies silent movies. So that was one.

And then there's Dead Ringers, which I think of as a modern film but actually came out in the 80s, which is probably before many users of this app were even born. That's to do with being 52. I think it's arguably the best Cronenberg film; I first saw it when it first played at the London Film Festival and was blown away. I wanted people coming to the BFI Player who hadn't seen the film to just hear why I love it so much. It's just devastating. It's listed under horror but I think it's just heart-breaking. So the intro is about putting it in a context and why I love it and saying, “Please watch it”.

As a film critic, your viewing is slightly weird.

We used to mainly see things in screening rooms but as more and more films have come out – you can easily have 12-13 in a week now – it's become the case that you'll see half of them in screening rooms and half on streams of some sort, whether that is a private link or, in the case of Beasts of No Nation, for example, straight from Netflix.

I have no problem with streaming at all.

I know some people see it as causing an inevitable decline in cinema but my feeling is that cinema and streaming are mutually exclusive.

For instance when I reviewed Berberian Sound System, the vast majority of people who would have seen that film would have seen it on a stream of some sort. Sure, it was on at the cinema in London, but some people would have had to travel for hours to see it. So my view is I'd rather people stream it, because firstly I want people to see it and secondly, it doesn't detract from the cinematic performance because who people who do live near cinemas were still going to see it.

There was the case of Ben Wheatley's A Field in England, some years ago, which came out in every possible format on the same day. Not only was the evidence that it still did as well in cinemas as it would have done without all the other formats being available, but that it possibly did slightly better, due to the huge wave of publicity it got through being so widely available. There was a weekend where you just couldn't get away from A Field in England.

What about screen size?

David Lynch once said, “If you've seen Eraserhead on a phone, you haven't seen Eraserhead.” And while I do agree with that, I don't think it's for me to say how people should watch films. It depends on your own, personal setup; I've been in people's rooms where they've had better setups than some of the cinemas I've been in. I've also seen people on trains going like this [mimes watching a mobile], watching 2001. I'm a big-screen sort of person, but I'm 52. I'm not prescriptive about it.

The future of all this, like it or not, is simultaneous distribution, so people can watch films in the way they choose. All the cinemas I love will continue because there's a reason to go to them. They've got proper projectionists, they're properly curated. Some of the multiplexes might suffer, but it's a different product with multiplexes, really.

I think the collection on the BFI Player+ have been chosen by people who are genuinely interested in cinema. They all have historic interest. My role is to welcome people in, because I have a fairly mainstream presence. One would hope there is a section of the audience that would say, “Let's see what he's recommending,” and then progress through the rest of the list.

What I am known for is going off on one about Entourage or Sex and the City 2, which is fine, but the best thing about being a film critic is when someone says, “I went to see that film because you said it was good.” I don't think critics can really affect a film's box office, but you can just tweak someone's interest in something. Berberian Sound System was a great example of that. I'd have loved to be at the door of every cinema showing that saying, “I know, I know, you're not sure, but it's a great film, it's weird,” and all the rest of it. Kind of a carnival huckster role.

Mark picks his BFI Player+ 'film of the week', each with exclusive filmed introductions, from the BFI's expertly-selected list of 100s of cinematic greats. A subscription is £4.99 per month, with no contract. A 30-day free trial is available.