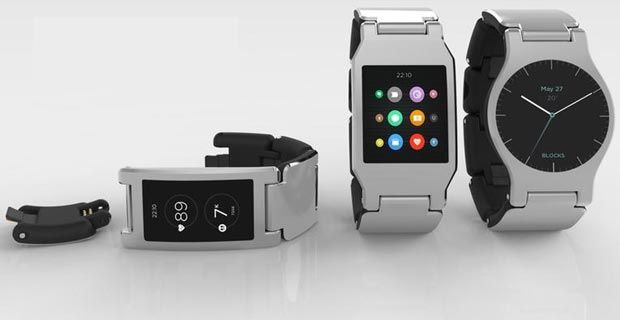 Maybe you've seen theApple Watchand its Android Wear rivals and you're still not impressed. You think you could do better. And Motorola's personalisable Moto Maker software with theMoto 360? Pah. What you want is a kit that lets you build your own smartwatch how you see fit, complete with interchangeable modules that you can swap in as and when. What you want is Blocks Wearables.

It's basically the smartwatch equivalent of Google's project Ara. The firm showed an early prototype of its device at CES in January, but now it's got renders, and has announced it'll start taking orders this summer.

It will be powered by Qualcomm, who powers almost every smartphone and smartwatch worth its salt. The main watch face module will feature a Qualcomm Snapdragon 400 processor, but apart from that, the specs are up to you. You can snap in modules to improve the battery life – something most wearables could do with – add GPS, cellular connectivity, contactless payments and a heart-rate monitor.

"But the Apple Watch already does most of this!" you might cry. The advantage is, this device is future-proofed. As more capabilities emerge, and the tech improves to cram more into a smaller space, more modules will be released, effectively giving you a new watch for a fraction of the price.

In theory, anyway. If the firm goes under, or no one makes modules for it, the idea is dead in the water. Much like a splash-resistant smartwatch that's been fully submerged in a swimming pool.

It also runs Android 5.0 Lollipop rather than Android Wear, which is an interesting move. That means it's compatible with both Android and iOS devices, which is always a boon.

The firm will launch it on Kickstarter in the coming weeks, and hopes to ship before the end of the year. If you fancy yourself as a smartwatch designer, it could be one for the Christmas list.