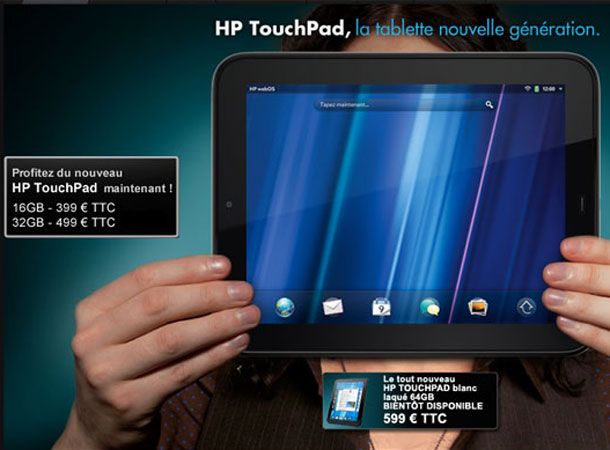 HP has unveiled a new 64GB rendition of its WebOS powered HP TouchPad tablet with the larger storage device appearing via the company's French website.

More than a simple storage increase the 64GB HP TouchPad as upped the tablet's processing capabilities and made the iPad challenger available in a new, white colour scheme.

Joining the image of the newly hued tablet on the tablet on the French HP website, the company has offered a description of the device which once translated reads: “A new color and more power. Stand out with the new HP TouchPad lacquered white!”

“64GB of internal memory allows you to carry twice as much music, movies or books. Its performance has also been boosted with a super fast 1.5 GHz Snapdragon processor. Perfect for work, communication and making the most of all your digital entertainment. HP TouchPad. The next generation tablet.”

Whilst the previously rumoured 64GB HP TouchPad as yet to be given an official UK release date or pricing the French site has made it available for 599 euros (£521).

Can the HP TouchPad and its WebOS foundations challenge the likes of the Apple iPad 2 atop the tablet market? Let us know what you think via the T3 Twitter and Facebook feeds.