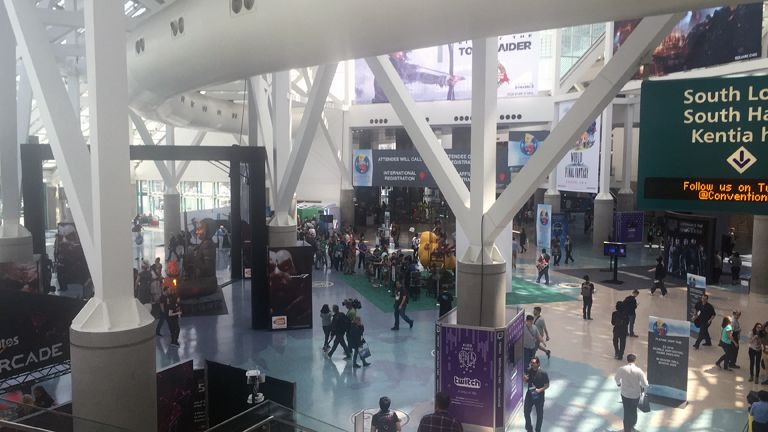 There is so much to say about this E3 that I don't really know where to start from, mostly because I have not yet seen what is happening everywhere. So, let's try to start from the beginning.

This E3 will be remembered as a period of transition, where it is not yet clear where and how the industry will go to.

The first clear perception of what I am talking about is that, when walking around the booths, many AAA+ titles announced have a "TBA" tag on them, and/or will be delayed directly to 2017, with no month specified for release.

A clear and huge example of what I am talking about is not indy games from startups, but killer titles like Tekken 7.

Every company at E3 2016 is trying to experiment and commercialize new technologies and applications for the market (4K, VR helmets, 60+ fps for mobile games, VRV on Xbox, etc..) copying their competitors and hoping to get the edge or steal the show.

The reason for this is that all the boudaries and the taboos of the last 20 years in the video game industry, such as the legendary "exclusives" for consoles, are clearly collapsing. A good example can be seen in the Phil Spencer statement (Head of Microsoft's Xbox Division) at the end of the Xbox press conference in which he said that from now on any game for Xbox game will be playable on any PC with Windows 10. This means only one thing: within five years we'll see no console exclusives.

But it will take some year to see who and if will be successful in this very delicate process, but what is clear (as it is any time there any major advances and technologies competing aginst each other) is that we will see inevitably many flops. I am reminded of the introduction of 3D TVs at the beginning of the decade – it ended badly for a lot of companies.

Talking about the show itself, it is almost the same as in the past, however that aforementioned transition is clearly palpable. In addition, behind the normal hype of the US shows led by many enthusiast gamers - which is always a good thing because it brings some optimism to an uncertain world, which was aptly hit home with Shawn Layden's statement as CEO of SCEA at the Sony Press conference underlining our feelings for the victims of the Orlando's shooting - while the stock market investors and the shareholders do not share the same optimism.

What is sure however is that the 'Toys-to-life' games like Lego Dimensions, Disney Infinity and Nintendo's Amibos (at the E3 Press conference two new sets were announced as coming soon) are the REAL cash cows in the western market. And this is why Nintendo and Warner Bros - who are well known to be wise (if not greedy) with their money - have invested so heavily on this field, as it means that the new generation of gamers can generate huge profits (even more than the hardcore gamers' segment around which the show is made) for them. In fact, most people forgot that last year WB's Lego dimension broke in at numer two in the UK gaming charts, surprising enough just by the fact is not even a AAA+ budget!

AAA+ titles are what hardcore gamers want, and that's where the industry over the last nine years has turned its investements. However, with rising costs and huge bankruptcies of many big publishers (such as THQ in 2012), this is needing to be balanced out with more consistent revenue streams and exclusive, console-specific hardware and features (because, as I said, console-exclusive games are dying out).

So even if on this occasion Sony has given particular attention to the hardcore audience, it needs to focus on softcore markets as well to help re-establish health of the company.

I found it very interesting that few journalists paid attention to Yamauchi's statement at the end of his interview at the ESA Twitch booth, in which he clearly said, "this time the new Gran Turismo is not an hardcore racing game." This is clear evidence of Sony shifting its focus and working to change its target for many of its franchises.

And now let's talk about the real deal of the show (and the reason why we are here in person to cover the show): Microsoft vs Sony.

What is really clear from the press conferences of both the publishers is that this time Microsoft is going bad and bold against Sony.

The megaton news by the Head of Xbox division that Windows 10 will allow anybody to play ANY Xbox games on ANY console (present and future) with anybody means just one thing: a total WAR for the last dime.

With this move Microsoft has shown clearly that it is willing and capable to lose money freely, as it did last year with the free upgrade from Windows 8 of its latest OS, to unite the PC and the console gamers in just one single market (under its Windows umbrella).

Well, I am not the only one to believe that it is going to be tough for Sony to convince the hardcore players (the ones Sony look at) to pay for a service that they can have for free and even better elsewhere and, right now, that's what a unified Xbox PC gaming landscape looks like.

Windows 10 is clearly the new MS-DOS and if it is going to happen that Microsoft is capable (even losing money at first as he did with the XBOX LIVE! in the first years) to establish its OS services for any gaming platform (portable or home computer or console), well I think we'll see a miracle.

Also, talking here with some developers at various booths, they all said that they are trying to gather more information as possible on the new DirectX 12 software, because as we know games are all developed first on PCs and then fitted in the (limited) consoles' specs. Obviously, whoever gets the edge on the knowledge of this technical field can really make the difference in terms of success and sales.

Sony knows this and from its leading industry position right now is trying really hard to keep the line of enhancing its console for new contenet (see the Neo and the PSVR). Remember, it was by managing to squeeze more performance out of the games on its system that allowed Sony to resurrect the PlayStation from the previous problematic selling position left by the PS3.

The annoucement of a line up of 50 titles for the PSVR at the launch is good and the new Star Wars Battlefront: X-WING VR MISSION is simply AMAZING. The idea of reprising the mighty X-wing vs Tie fighter game with a new 3D helmet at $399 is brilliant - but the big question that any gamer will be make (obviously) is: will the PlayStation VR just finish up as another PlayStation Vita or Betamax?

And finally, on a counterpoint, Nintendo with its limited funds and delicate financial position, is clearly focusing its efforts on what is already almost done from the previous management (i.e. the new Zelda) to improve the Wii U's anemic sales in the west and limiting the expenses for the release of the NX.

In the end: who is the real winner of the E3 2016 between Microsoft and Sony?

Check back in tomorrow for my thoughts on Day 2!