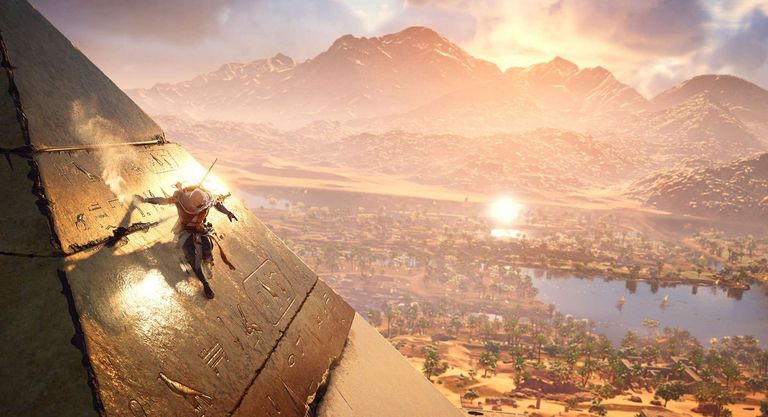 Easily the worst kept secret in the run up to E3 2017, the new Assassin's Creed has finally been officially unveiled at it's taking the series back to its roots with an Ancient Egyptian soft reboot.

Playing as Bayek, a roving guardian who helps found the Assassin's Brotherhood, we'll explore Ancient Egypt at its height. It's the era of the pharaohs, so expect to clamber up pyramids and descend into deep, labyrinthine tombs.

That classic AC feel is there - including fluid parkour movement, stealth action and plenty of ways to kill your chosen target, but there's plenty of innovations to prove that layoff was worth it.

There's a greater focus on RPG elements now - Bayek can be levelled up (much like the Fryes in 2015's Syndicate), with new abilities and skills unlocked via spending Ability Points. Weapon loadouts can be customised as you play, with new weapons dropped as loot by enemies or uncovered from chests. These weapons have unique stats so exploration often rewards players with new gear.

Combat has also been given an overhaul. Stealth kills are still there, but melee has now been updated. You can block with shields, dodge and slash with a variety of weapons. We can't help but feel the likes of Dark Souls and The Witcher have left a lasting impression on the studio that brought us 2013's Black Flag. You even get an eagle that you can use like a drone to tag enemies.

Assassin's Creed Origins arrives for PS4, Xbox One, Xbox One X (and most likely PS4 Pro, too) on 27 October 2017. The PC version will launch shortly after.