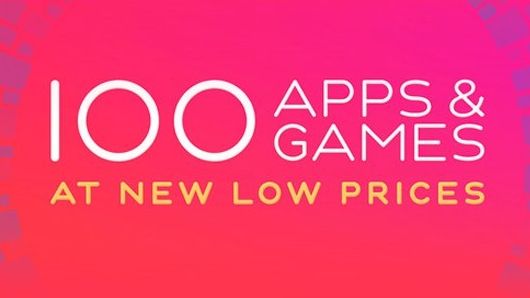 Worried that you're stuffing your iPhone or iPad with too many apps and games? Sorry, but Apple's just made it worse by slashing the price of 100 actually-rather-good apps and games.

If you're waiting for the perfect moment to drop some cash on Goat Simulator (come on, admit you're tempted), then now is the time, as every app and game in the promotion has had its price slashed to just £0.79.

Other apps and games in the sale include Angry Birds, Rayman Jungle Run, Limbo, GoodReader and Slow Shutter. With some of the apps going for around £5 or more before the sale, the drop to £0.79 is a pretty great saving.

We don't know how long the sale is on for, so you might want to be quick if there's an app or two that you have your eye on – we just feel sorry for anyone with a 16GB iPhone – as when else are you going to get a chance to spend money on apps you'll buy and then never play but come on you had to buy them it was a good deal?.

Rather annoyingly, Apple doesn't seem to have made a dedicated area in the App Store for this sale, so you're going to have to do a bit of hunting to find a bargain. However, if you have an iOS device you can go to the iTunes website and see a list of discounted apps there.

As well as the apps and games we've already mentioned, other cut price downloads you can nab include Soulver, Badland, Shadowmatic, The Amazing Spider-Man, and Afterlight - we're working on the full rundown right now.