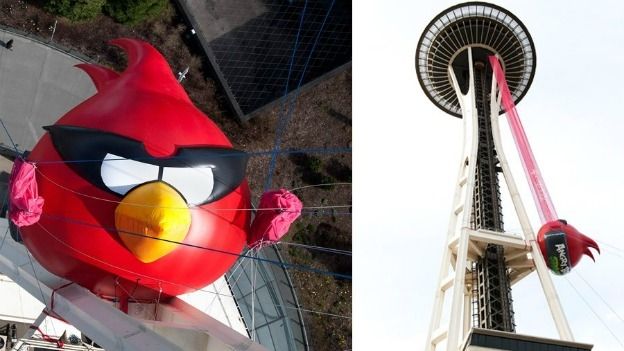 The oversized art installation, which adorned the side of the landmark building, helped promote the launch of the latest Angry Birds offering with those passing by invited to try out the iPhone, iPad, Android, PC and Mac app offering all whilst sampling a host of Angry Birds Space decorated cakes.

Claiming to promote learning and physics through play, the new Angry Birds offering sees gamers battling against variable gravity environments in order to deter the familiar band of pesky pigs from stealing the birds' eggs.

“By taking the game galactic, Angry Birds Space retains the familiar elements of Angry Birds gameplay but gives them a unique twist in a variable gravity environment,” an official Rovio spokesperson said of the new title.

“From the weightlessness of space to the gravity wells of nearby planets, fans can have fun with physics as they try out new gameplay possibilities. The Angry Birds themselves have also transformed into superheroes, with new costumes and abilities.”

Hitting the key players of the mobile market, Finnish developer Rovio has launched Angry Birds Space for the usual array of Apple iOS and Android smartphones and tablets as well as Mac and PC adaptations of the interplanetary title.

One high-profile omission from the Angry Birds Space platform line-up was Microsoft's increasingly popular Windows Phone 7 offering. Having originally announced that it would not be making the new Angry Birds offering available for WP7 users any time soon, Rovio quickly back tracked stating: "We are working towards getting Angry Birds Space to WP7."

Have you already sampled the latest addition to the globally dominant Angry Birds franchise? What do you make of Angry Birds Space? Let us know via the T3 Twitter and Facebook feeds.