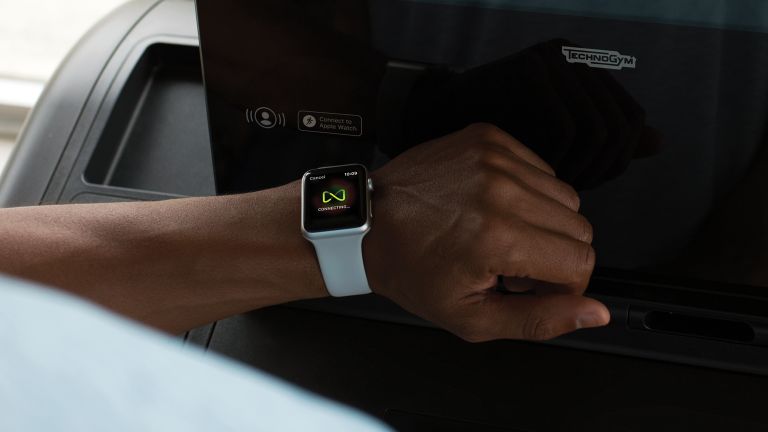 The Apple Watch is now a decent all-round fitness watch. There we said it. It’s workout skills have improved considerably since the first generation smartwatch made its debut around two and half years ago.

In that time we’ve seen phone-free GPS, waterproofing for swim tracking, a barometer for tracking your climbs when running or cycling and improved optical heart rate tracking, creating a more serious fitness device.

Now, with the launch of watchOS 4.1 and Apple GymKit, the company has made its first serious move into the gym and the results are pretty impressive, even if it's not quite a six-pack-in-six-days game changer.

Powered by NFC and available on Apple Watch Series 2 and Series 3, Apple GymKit lets you unlock a range of clever cardio tracking features, simply by tapping your timepiece on four of the most popular gym machines:

Tapping your GymKit-enabled watch onto a compatible machine allows key data to be sent both ways, filling in the fitness tracking gaps in your Apple Watch Workout app and making the information on the machine more rounded. This means more complete stats for indoor training and lot less fuss when you’re starting a workout.

With many of the fitness industry’s premium brands – LifeFitness, TechnoGym and Matrix Fitness – and big gyms such as Virgin Active all on board, expect to see the tech roll out to a gym near you at some stage in 2018.

I was among the first people to put GymKit through its paces, because I'm bad-ass like that. Testing was done on a newly upgraded upgraded Technogym treadmill at the UK’s first GymKit-compatible gym, Virgin Active Mansion House in London.

So what is Apple GymKit and why should you be excited about it if you're a gym-goer? I'll tell you why!

How do you use Apple GymKit?

Over the years, gyms have tried various means to help us capture our cardio fitness data. We’ve seen QR codes on machines, special keys and more recently NFC-powered smartphone apps porting our workout stats to online platforms, but so far the solutions have added a layer of frustrating faff rather than give us a seamless way to track our indoor sweats.

With GymKit, Apple has done its usual trick of taking an existing idea and making the whole thing work, in a stupidly simple way.

Just walk/jog/parkour up, tap your Watch on the NFC point on the machine and Apple's wearable does all the work for you, up to but not including the actual workout bit.

It automatically fires up the Workout app and wakes the machine so there’s no need to open any apps on the watch in order to get going. The only thing you need to do is hit ‘Start’ once you’re ready to begin your session. I was really impressed with how easy this was; it worked every time without delay and with no need for complicated pairing.

With GymKit, compatible machines now take heart rate readings direct from the surprisingly effective and accurate cardio tracker on your Apple Watch or a chest strap paired to the Watch if you still prefer the usually even greater accuracy of chest HR – if you have a chest strap paired to the Apple Watch it automatically uses this one over the optical.

In our short test the numbers synced perfectly; what we saw on the treadmill screen was what it said on the watch, with no lag or delay.

Even if you’re willing to spend precious time programming gym cardio equipment with your height, weight, age and gender, the calorie count for your workout isn’t likely to be terribly accurate, but GymKit has a fix for this too.

Apple Watch already has all of your biometric data set in the Workout app, and a remarkably accurate calorie-counting algorithm. It now syncs that with the machines to automatically make your readings more accurate.

It even breaks it down into active and passive calorie burn for the duration of the exercise, so you now know exactly what you’re burned and earned from the workout effort alone, and what you would have burned during the same period just by being alive. That's not really terribly useful, but whatever.

See the benefit of your elevation gains

You can’t use a normal running watch indoors to get the elevation gain stats from simulated hill training as, obviously, you never actually gain any altitude. While the treadmill can interpret how far you’ve climbed, none of this data ends up in your Garmin or Polar watch stats.

With GymKit opening up a two-way data stream, that changes. The Apple Watch reads the climb data and speed data from the treadmill and uses an algorithm to convert it to more useful elevation gain stats in the Apple Workout app.

You don’t have to look at your watch anymore

This might sound trivial but if you’ve ever tried to smash out a fast interval session on a bike or treadmill, you’ll know that it’s not convenient to raise your wrist and check your vitals – on a treadmill, you might even risk an embarrassing faceplant.

Now you don’t have to worry because all the key info is shown on the machine's screen.

Forgot to tap? No problem…

Hopefully you won't need this too often, but If for any reason you start a workout without tapping your Watch, Apple has that covered too.

You can touch your watch to the machine at any point during your workout, even up to the summary screen at the end, and all of the data will sync. If you’re 4.5 miles into a 10km when you tap, the TechnoGym screen will automatically update to show you exactly where you are in the workout, calibrating the on-screen calories and heart rate information accordingly.

Programming cardio machines for interval sessions is fiddly, even on the newest machines with their colour touchscreens while the pre-set sessions often don’t match what you need to do.

This leaves you with the unhappy choice of pressing buttons for 10 minutes pre-workout or trying to manually control speeds and inclines during the run to recreate your interval set.

What I’d love to see is the ability to create and save your favourite interval drills, on the Apple Watch or your iPhone and then tap and go when you step onto the treadmill or bike.

The way people train is changing and more of us are now strength training off machines, using free weights, kettle bells and big ropes or doing HIIT drills and bodyweight exercises. It’s this, according to Apple, that’s the reason why GymKit doesn’t work with the fixed weights machines.

However, TechnoGym has some very useful rep counting tech on its newest machines that still form an important part of any strength workout and we’d love to see this integrated with GymKit.

It would help you see not only how many reps you’re supposed to do on each machine but the weights too, all of which could then be synced back to Apple Workouts or third-party platforms where real or AI coaches could comment, advise and set plans.