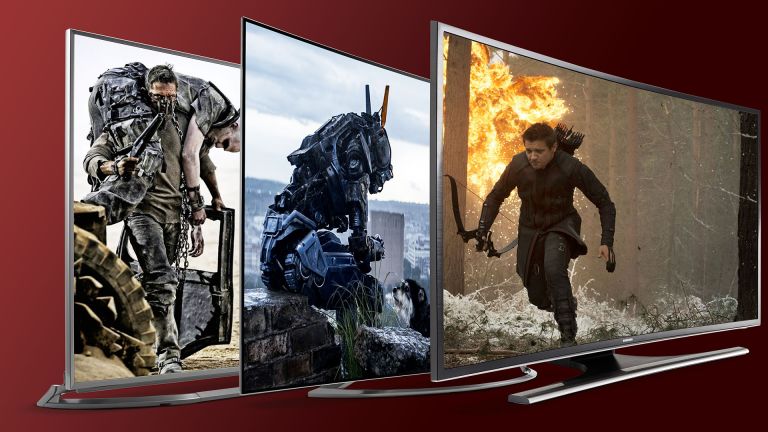 There you were, getting comfortable with your Full HD set-up, admiring the clean picture edges and lack of motion blur, and revelling in the pleasure of watching your favourite shows in the crystal clarity of 1080p. You were happy. Then one day, you walked past your high-street electrical retailer and saw the future as it really is…

It was like putting on glasses for the first time and realising your eyesight was actually terrible.

The TV screen in the window was showing the same programmes you'd been watching, but something was different. No, everything was different. That's the power of 4K and the reason everything else now just looks 'faux K'. 4K has been the biggest buzzword in TV technology for the past few years, but it's now picking up a huge amount of pace. According to John Lewis, over 40 per cent of the televisions it sells now are 4K, and the popularity of the format has meant that even John Lewis is launching its own-brand version of a 4K TV – the JL9100.

No one really expected 4K to move this fast. It comes relatively soon after the world and its wife bought into the idea of Full HD and Blu-ray, so analysts expected the adoption of 4K to be a slow process. They were wrong, though, and there are two reasons for this: price and content. But before we dive into those areas, here's a little bit of science.

4K is simply four times the picture quality of 1080p Full HD, which means you get eight million pixels for your money, rather than two million. Extra pixels mean better, well, everything. Textures are more detailed, edges are more refined - movies and shows in 4K look truly stunning. Trust us, it's no gimmick like 3D because it enhances rather than detracts from the experience of watching television. But before we get ahead of ourselves, this isn't an image jump akin to VHS to Blu-ray – the difference sure is noticeable, but it's a little more nuanced.

Like some sort of superhero, 4K comes in a number of guises - while we at T3 think that 4K should be the name of the technology, some aren't happy with this nomenclature, preferring UHD, short for Ultra High Definition. Because this is a more marketable term, you may see the likes of Samsung use
it. Though 4K and UHD are basically the same thing, if T3 were to put on our pedant hat, we'd tell you that 4K resolution defined by the DCI (Digital Cinema Initiatives) is 4,096 x 2,160, while Ultra HD is 3,840 x 2,160. But that's being picky, so we'll take that hat off.

To get 4K in your home, you need a number of things. The first is a source. The good news here is that you may already have one. Both Netflix and Amazon Prime Instant Video have put their weight behind 4K, so they have content that's readily available in the format right now. They're also backing something called HDR (High Dynamic Range), which is technology that makes 4K content look better and brighter. The issue with this is that you'll need a strong internet connection to get 4K-quality content. Both Netflix and Amazon reckon you need 25Mbps for 4K to flourish, so you may want to look into getting a fibre plan from your internet provider.

Streaming 4K also comes at a premium - for 4K Netflix, you'll have to pay an extra £1.50 a month, which pushes the monthly subscription fee to £8.99. Amazon is being nice and offering its service at no extra cost, but you will have to buy into its Amazon Prime offering, which costs £79 a year.

Both Netflix and Amazon rely on you downloading their apps to a smart TV or streaming device – in fact, anything that's been blessed with HDMI 2.0/HDCP 2.2 inputs. A word of warning: it's always worth checking that the 4K device you're planning to buy has these. Without them, any copy-protected 4K content won't be played. Yes, it's stupid and annoying, but this always happens when standards are being decided.

Two streamers to look out for are the 4K Amazon Fire TV box, which costs a none- too-shabby £79.99, and the Nvidia Shield, an Android TV box that's 4K-ready for both gaming and movie streaming, and is available from around £120. If you have a high-spec PC or laptop with a 4K-capable graphics card (which will cost around £200), you may want to give YouTube a spin. It's got a raft of 4K content that you can watch right now.

When it comes to consoles, you'd expect that the PS4 and the Xbox One would be fully behind 4K support, but this simply isn't the case. Both Sony and Microsoft are being coy about whether they'll be able to offer 4K content over a software update – it's more likely that you'll have to wait for new hardware upgrades from both.

The good news is that broadcasters are all go when it comes to 4K. Well, one is. BT is the first to have a 4K channel that's dedicated to sports, which you can watch through a 4K-capable set-top box – namely, the Humax DTR-T4000 YouView box. Subs are available from £15 a month.

The next part of the 4K puzzle is the most important - the television. When 4K TVs first hit the shelves, they were expensive, mainly because they were released in ridiculously large sizes. Not any more. As a rule of thumb, you should be looking to buy a 40-inch TV or bigger, as anything smaller than this
means you won't get the full benefit of the 4K technology. If your room is too small for such a TV, maybe rethink your 4K plans.

Pay attention to your seating position, too – you should sit at least 1.5 metres away from your TV, so it's time to get the measuring tape out and see if your living room can handle it.

As we mentioned earlier, you really need a television with an HDMI 2.0 port. Older 4K TVs may not have this connection, so be wary if you're being lured into buying an older set because of its attractive price tag. At the moment, you can get your hands on a decent 4K television for around £700. Take, for instance, the Samsung UE40JU6500, a stunning 40-inch set that can be found for under £600 if you look hard enough. If you have a bigger budget to play with, the 50-inch Panasonic TX-50CX802B is a steal at around £1,500, packing Panasonic's Studio Master Drive software to boost picture quality, voice control and wireless content sharing.

If you really want to impress your mates, you need to know about two acronyms: OLED and SUHD. OLED is a technology that's been around since 2007, when the first Sony TV that used the tech was just 11 inches across and cost £11,000 - a grand an inch. Since then, OLED has been adopted by LG and Panasonic for 4K. LG's whopping 65-inch 65EC970V television is a stunning curved effort that utilises the blacker-than-black pixel performance OLED is famed for. Panasonic has improved on this with the TX-65CZ950, where it's offering the same performance but with its Studio Master Drive power.

SUHD is Samsung's fight against OLED. It's a new-fangled piece of technology that promises the same amount of brightness as OLED but in LED form. Some manufacturers call this Quantum Dot, and it essentially comprises a thin layer of nanocrystals that boost colour and light on a TV by around 30 per cent. Impressive. Oh, and we don't know what the S in SUHD stands for - probably 'super', but it could just as well be 'swish', 's'alright' or, possibly, 'Sharon'.

Of course, 4K isn't just about TVs – many cameras now output 4K video. Check out the Samsung NX1, as it's one of the few cameras that shoot 4K on the fancy HEVC codec. Even the phone in your pocket could have 4K compatibility. The iPhone 6s and the Samsung Galaxy S6 both have this functionality, which means you can watch that shaky footage of your mate falling over in glorious 4K quality on your big-screen TV. Remember: this is the world we deserve, folks, not the one we need.

4K technology is still in its early stages, but it's guaranteed to grow. It's likely that we'll get an announcement from Sky about its 4K plans in the near future, and this will definitely act as a tipping point. Couple this with the first 4K Ultra HD Blu-ray discs (and players) arriving in 2016 - X-Men: Days Of Future Past, Life Of Pi and Kingsman: The Secret Service are all on the list - and the inevitable 4K console update, and what you have is the foundation for a fantastic 4K future.

All we need now is for our eyeballs to catch up with the technology. Then again, once that happens, 8K will be here and we'll be wanting to upgrade our gadgets all over again.

It looked like 4K Blu-rays were never going to happen, but the BDA (Blu-ray Disc Association) has finally agreed on a standard and announced their arrival for early 2016. The official title for the format is 4K Ultra HD Blu-ray. The first batch of movies are: Exodus: Gods And Kings; Kingsman: The Secret Service; X-Men: Days Of Future Past; Fantastic Four; Life Of Pi; Wild and The Maze Runner.

You'll need a 4K-compatible Blu-ray player to watch them – so far, the only company to officially announce one is Samsung. Its UBD-K8500 should arrive in early 2016, too, though don't expect a slender device – it's a bit of a beast. At least backwards compatibility to plain old Blu-ray has been announced. Other manufacturers are busy prepping their players – including Panasonic, which was showing off a prototype back in September.

Given that 4K content is a little limited at the time of writing, the best set-up T3 can recommend is one that embraces all the streaming services, as well as BT's Ultra HD channel package.

Television-wise, you can never go too big when it comes to 4K. We reckon the 65-inch TX-65CZ950 OLED from Panasonic could be the TV to beat, but the LG 65EC970V is also excellent as is the equally stunning Samsung UE65JS9500, but LG's offering is a 4K TV with real might, and T3 loves that it's managed to keep OLED fires burning.

This tech does come at a cost – you'll have to pay a whopping £5,000 – but for the money, you get the best picture quality around, a curved design that will forever be a talking point, and some decent sound. Plus you can access Netflix and the like through webOS, the television's smart, Web-connected operating system.

This should be paired with the BT Ultra HD channel and the Humax DTR-T4000 YouView box. It's got a 1TB hard drive, so you can save plenty of 4K content. BT is currently offering a monthly subscription of around £43. For that, you'll get the box, access to BT's Ultra HD channel and broadband up to 38Mbps.