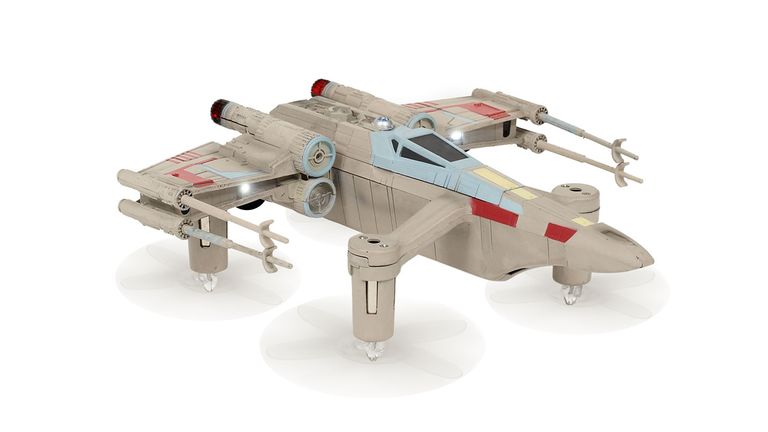 Force Friday sees all manner of Star Wars goodies released to the public and one of the coolest ranges has to be the new Collectors Edition Propel Star Wars drones collection.

The individually numbered models, officially launched on the 1st of September, are available exclusively from John Lewis at a price of £199 and come in lavish packaging complete with lights and music. Unpacking the box is an experience in itself.

The models are hand-finished creations packed with detail and are individually numbered. But, best of all, they can be flown with others in the collection for real-time air combat games.

Competing with up to 12 people at the same time, the concept is an exciting new twist on flying drones and, such is the compact nature of these little models, the action is intense and guaranteed to keep you on your toes. Propel reckons that the idea could blossom into a whole new competition phenomenon.

The T-65 X-wing Starfighter, Darth Vader’s TIE Advanced x1 and a 74-Z speeder bike comprise what will be the first edition in a series of high-performance battle drones launched by Propel to bring the ultimate flight experience to Star Wars fans in over 25 countries.

All three quadrocopters boast flying speeds of more than 50 km/h and a whole raft of technical innovations, such as for the first time ever Li-Fi technology which is integrated into a drone and which enables a new dimension in “real-time play”.

The models not only look fab, but are also great once airborne thanks to integrated flight control algorithms for various types of high-precision multiplayer air battles. This includes a new T Mode (Training Mode) for first-time flyers, which creates an invisible aura around you and makes the drone easier to control, so it’s super-easy to get started.

However, special manoeuvres like corkscrew rolls in forward flight and innovative reverse propulsion drone technology enable the craft to accurately reproduce the famous flight action from Star Wars. The only thing left to do, reckons Propel, is select the model and choose between the “dark side of the Force” or affiliation with the Rebels.

Propel will be launching the first in a series of companion apps on the first of September. The initial release will be a flight simulator with 34 training modes, to train you from cadet to admiral status.

The app syncs your remote controller to your phone via Bluetooth and movement mimics the actual live flight experience.

Ultimately, this allows you to perfect your performance, before taking on others in battle. The app also includes an innovative IAT ‘intelligent awareness technology’, which during real time game play battles - at any point in time - knows your exact position in the game and coaches you how to win the battle and defeat others.

Now check out all the Star Wars Force Friday 2 toys