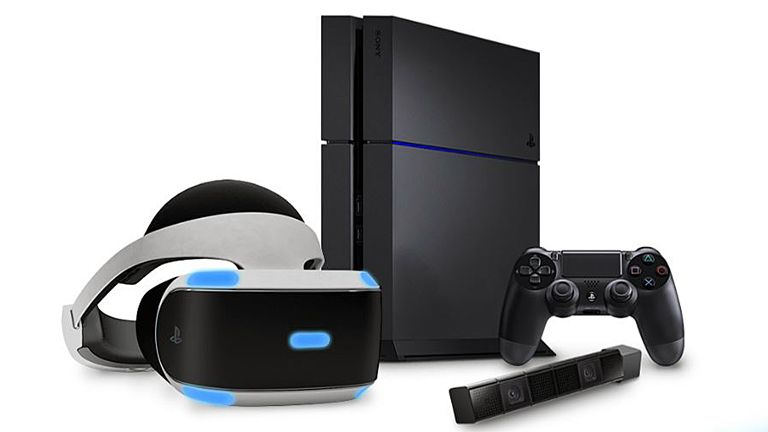 If you want to get the knowledge on Sony's VR headset then you have come to the right place my friend. We've parsed all the released information down into five, easy-to-read sections, covering everything from PlayStation VR's cost and hardware, to where it sits within the wider VR landscape. We've also included a bunch of useful links to other VR-related news and reviews, so if you want to check out the PlayStation VR's competitors too, then you can with just a few quick clicks.

Let's start with what is most likely the deal maker or breaker for most people, the price. Sony announced at GDC 2016 that the PlayStation VR would retail for $399, or for us chaps in the UK, £349. This price is compartively low compared to the other front-runner systems announced so far, with the Sony headset ringing in $200 cheaper than the Oculus Rift and a whopping $400 less than the HTC Vive.

UPDATE: The official "PlayStation VR launch bundle" is now sold out until "Summer 2016". Third party combo bundle pre-orders are still being taken though.

UPDATE: It has been confirmed that the PlayStation VR will launch on October 13, 2016.

Next up is the release date, which right now simply sits as 'October 2016'. When in October that is we have no idea right now, however if we were hazard a guess, then we'd plump for the third weekend on the month, as by that point people are very much in present buying mode for the holiday season. Will it slip? No, no it will not. Sony has been working on this for years and there were fully functioning hands-ons last year, so we see no reason for it to slip. Games, on the other hand, are a different story all together (see below).

Ok, now onto the serious stuff - hardware. ThePlayStation VR boasts a 5.7-inch OLED screen, 1920x1080 resolution, FOV of 100 degrees, maximum refresh rate of 90 Hz and 120 Hz, 360-degree tracking capabilitiy and a latency of less than 18ms. That, in comparison to the HTC Vive and Oculus Rift, is ok. It beats neither in terms of pure hardware, however it comes damn close and considering that the coming VR war will be won or lost mainly by a platform's supporting ecosystem, we think it is perfectly adequate.

For comparison, here are the core specs from both the HTC Vive and Oculus Rift:

UPDATE:The Sony PlayStation Blog has revealed that PlayStation VR owners will get a free demo disc with the system at launch. That demo disc contains eight VR games for you to play. These are the announced games, with desciptions courtesy of Sony:

Driveclub VR - Feel the speed of high-octane racing in an entirely new way - you've literally never seen DRIVECLUB like this before.

PlayStation VR Worlds -n this demo you get to make a splash in the perilous waters of Ocean Descent, one of the five PS VR experiences available in the full game. Amazing sights, a lost secret and extreme danger all await…

RIGS Mechanized Combat League -Master some of the most sophisticated and athletic fighting machinery ever created, in fast-paced arena combat – this is the future of sport.

Tumble VR -Explore a new dimension in puzzling with a fully 3D version of the classic block stacking game.

Battlezone -Experience tomorrow's battlefield today in the powerful Cobra tank, and demolish all that trundles in your path.

EVE: Valkyrie -Take to the stars and blast your way through swarms of enemy fighters in nerve-shredding space bound battles.

Wayward Sky -Soar among the beauty of the clouds in search for your father, in a crumbling airborne fortress.

Headmaster -Have a little kick around (erm… with your head) over at the wonderful Football Improvement Centre, which is most certainly not a prison of any kind whatsoever.

And talking of supporting ecosystems, let's talk about what games you'll actually be able to play on your new, wallet-emptying piece of hardware. Well, Sony has confirmed that it expects 50 games to be released for the PlayStation VR between its launch date in October and the end of the year. Here are some of the notable titles to have been announced already:

In addition to these, each PlayStation VR will come with a free copy of Playroom VR,which is a collection of six socially-orientated games created by Sony's own Japan Studio. Other titles, such as Uncharted 4 and Psychonauts were shown on screen during the PlayStation VR special event at GDC, however no confirmation was forthcoming.

PlayStation VR will be one of the major gaming presents this holiday season, with an affordable entry point - compared to other headsets - and an impressive launch library of games. T3 will bring you an official review as soon as we can get our hands on one.

The PlayStation VR is now available for pre-order through both Amazon.co.uk and Game.co.uk

This article will be updated throughout 2016 to stay abrest of all the latest PlayStation VR developments. So make sure to check back in at a later date for knowledge.