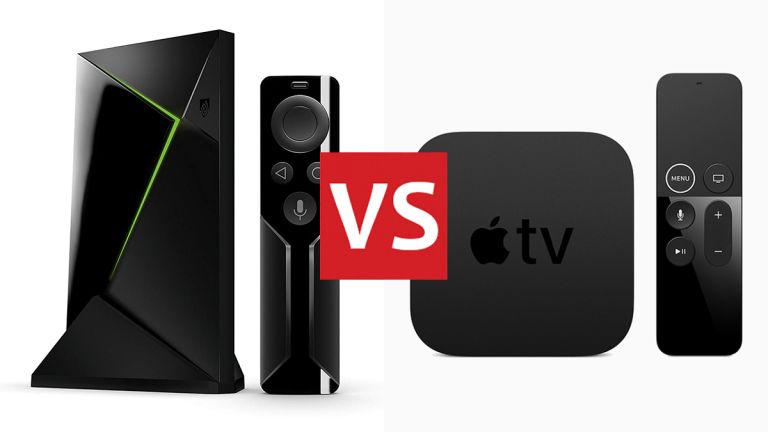 If you're looking for a box to get 4K video content and a host of other goodness up on a television screen, then the Nvidia Shield 4K and Apple TV 4K are two of the devices at the front of the queue – but at the end of the day which is better at serving up your media?

We're here to help you make sense of the pros and cons of these two boxes: we're going to put them head-to-head in all the categories that matter, from the design of the hardware to the supported apps. Read on for our full Nvidia Shield 4K vs Apple TV 4K breakdown.

If you've got a box that's competently serving up 4K video to your big screen display, does it matter what the actual box looks like? Well, maybe. If you're wanting your home cinema setup to be as aesthetically pleasing as possible, then you're going to be interested in the design and stylings of the Nvidia Shield 4K and the Apple TV 4K.

Both these boxes have the same purpose in life: to serve up 4K video content as well as music, photos, games and other apps. Both come with an HDMI out connection, and both have a slim remote control (we just slightly prefer the one with the Apple TV 4K). The Nvidia Shield 4K comes with 16GB or a whopping 500GB of internal space, while the Apple TV 4K can be had with either 32GB or 64GB of internal storage on board.

The Apple TV 4K plays a smattering of games, mostly adapted from iOS, but the Nvidia Shield 4K is much more of a gaming machine (and has an optional gamepad accessory). You can stream games from the cloud via Nvidia GeForce Now (which needs an extra subscription), stream games from a PC on a local network (which doesn't), and access mobile games built for Android TV too. If you're at all interested in gaming, then you'll want to pick up the Nvidia Shield 4K.

Software and app support is an important part of the equation here: the Nvidia Shield 4K comes with Android TV on board (complete with Google Assistant) while the Apple TV 4K comes with tvOS (complete with Siri). Both make use of an intuitive tiled interface that's simple to get around and gives you access to all your apps.

Most of the big names – Netflix, YouTube, Plex, Amazon Prime Video – are available on both platforms. As we've mentioned, the Nvidia Shield 4K is missing iTunes and Apple Music support, and the Apple TV 4K doesn't have Google Play Movies and TV. If you're more into your music, Spotify is on Android TV but not tvOS (though you can AirPlay tunes to the Apple TV 4K box from an iPhone).

The software comparison between the Nvidia Shield 4K and the Apple TV 4K is a lot like the Android vs iOS debate. Apple's box is a bit slicker in what it does, but it's also a bit more limited in terms of customisations and what you can do with apps and other devices that aren't made by Apple.

As is often the case when we're weighing up an Apple product, the Apple TV 4K is a fine choice if all of your other gear is made by Apple – it works seamlessly with iPhones and Macs, and with Apple HomeKit and Apple Music, and with videos available on iTunes, and with Apple Photos, and so on. Some third-party services are supported, like Netflix and Amazon Prime Video, but it's a very Apple-focused device.

The Nvidia Shield 4K isn't going to work as well with Apple stuff – it can't play videos from iTunes, for example. Overall though, it's the far more capable device, with support for external storage, and all the gaming extras you get courtesy of Nvidia, and the ability it has to act as a Plex server, and its native apps for the likes of Spotify and Google Play Movies & TV. You can even plug in a USB tuner and watch live TV.