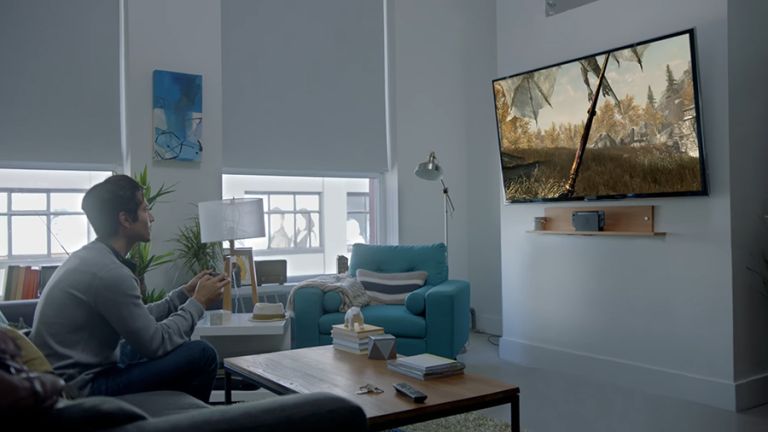 Trust Nintendo to come in and shake things up just as the current custodians of home consoles start rewriting the rules for themselves.

The last couple of years have been dominated by the promise of 'mid-generation upgrades', the ascension of VR and the general insatiable hunger for processing power and graphical oomph.

But with Nintendo Switch, Nintendo isn't chasing the title for the most powerful console on the market. It's got a unique selling point all its own, and it's one that finally break the spell PS4 Pro and the mysterious Project Scorpio have held over us for so long.

And while Sony's choke-hold on the gaming market with its 50+ million selling PS4 and PS4 Pro consoles seems unbreakable, it wouldn't be the first time that Nintendo swaggered into the party and changed the industry forever with a brand new, game-changing feature.

Remember Wii? It might be resigned to dusty wardrobe graves and car boot sale tables now, but back in 2006 it took everyone by storm. It reached Buzz Lightyear/Furby levels of scarcity that Christmas with consumers, and forced fellow console manufacturers to drop everything in any attempt to compete.

Of course, we all know how that turned out - PS Move died on arrival, quietly phased out of production as Sony realised a peripheral that looked like a cheap sex toy probably wasn't going to sell that well without a worthwhile technological excuse behind it (hello PS VR).

Microsoft's Kinect even had a second iteration on Xbox One, but the peripheral had long missed the Wii motion control bubble and it too was taken out to pasture.

It's hard to deny that Wii didn't have the kind of staying power of Nintendo's faithful handheld 3DS - and its explosive popularity likely hindered the far less innovative Wii U years later - but its impact on both the core videogame industry and the mainstream market is a bold reminder that Ninty is far from an antiquated console manufacturer from a bygone era.

Switch has every potential to eclipse the effect of Wii and create a legacy that will last for generations to come. Motion controls were a fad that predated the rise of VR, but combining the handheld market with the power of the home console is monumental transformation in itself.

Taking (potentially) some of the biggest games of the year on tour with you, wherever you might be - a home console right there in your pocket - is exactly the kind of innovation only Nintendo could demonstrate and could well break the industry's sole focus on graphical output above all else.

More importantly - perhaps most important of all - Switch's unique selling point isn't something Sony or Microsoft can feasibly imitate in the years to come. Sony certainly has the hardware to offer something vaguely similar with PS Vita's Remote Play function, but when was the last time you heard anyone outside of Japan playing a Vita?

If Nintendo nurtures the right relationships behind the scenes, and Switch's hardware offers developers a genuine space to innovate, its new flagship console will present a platform that's both a contender and a fresh and exciting portal to new worlds.

Sony and Microsoft can push HDR and 4K upscaling all they like, but they can't do a thing to compete with a console that could well offer some of the same multiplatform titles without being tied to your home.

It's the blurring of the lines between some of the biggest facets of our industry that could make Switch something truly special. too. A console that combines the touchscreen UI of a tablet with the traditional controls of a a handheld, one that will that full-fat triple-A games into the portable market is mind-boggling.

Switch has left us with a great many questions, and we're hoping many of them will get some form of answer come around 13 January when Nintendo holds a big hands-on event in New York.

If the impressions are good, and Nintendo makes the effort to showcase the right games (and by that we mean more than just relying on a Zelda game that's being co-developed for Wii U), Switch could well be the game changer we didn't realise we needed.