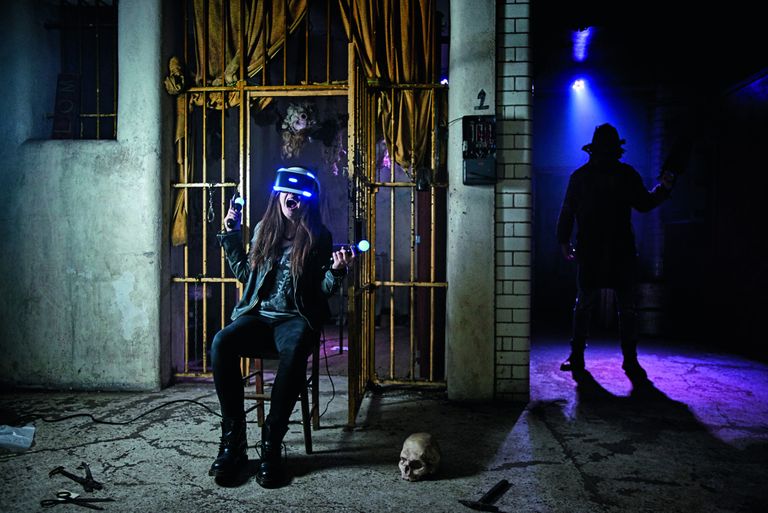 Admit it, you’ve always laughed at the videos of that person on YouTube stupid enough to don a VR headset and venture into horror games. “Why would they do that to themselves,” you ask as you gleefully watch them seize up in genuine terror when something goes bump in the digital night. as someone who loves horror movies and VR, I appear to be top of editor Matt’s list as he casually saunters across the office with a fun idea. of course it seems great on paper. all I have to do is wear a heart-rate tracker and head into this year’s most terrifying VR experiences to track my physical response to the horror. What’s the worst that can happen?

Well firstly, what Matt didn’t tell me was that I’d have to leave my living room. Great. Public humiliation already. The first trial for my poor ticker is the newly revamped Derren Brown’s Ghost Train: Rise of the Demon at Thorpe Park. Combining live theatrical illusions, real actors and VR, the Ghost Train is the first of its kind and, not so hilariously, proudly comes with the longest warning list in a park that also holds the official Saw ride. Anything that says, “Guests will be kept safe at all times; however...” should really have given me a clue, but I strap on Fitbit’s Alta HR tracker regardless. Ignoring the big board of nope and taking note of my resting heart rate – a rather average 79bpm – I head into the darkness. It quickly becomes apparent that liking horror films has given me absolutely no desire to be inside one or meet the monsters that lurk there.

A holographic Derren Brown introduces the experience, telling us that if we don’t like what’s happening, we can close our eyes and it’ll all go away. Oh good. I’m vaguely VR smug as someone who has at least donned a headset before, but entering an enormous warehouse where a Victorian train carriage is suspended on chains leaves me feeling a little uneasy. This doesn’t go away when we’re herded inside only to find a modern London underground carriage full of HTC Vive headsets – no, sorry, protective masks. I won’t spoil the experience but the following 15 minutes of scares are exhilarating. Once you’ve donned the headset, you’re immediately transported to a different train, or is it the same one? Obviously that creature isn’t real, but the screams in my carriage are and WHAT JUST GRABBED MY LEG?

A break from the VR in the middle sees the group heading screaming into the depths of the London Underground where live horror actors lurk, and I’m personally relieved when we return to the relative safety of VR. Escaping into the fresh air afterwards, I log my activity and it turns out that horror makes great exercise. During the 35 minutes of queuing and scares, my heart rate’s new average is 122bpm and at one point reached the lofty highs of 141bpm. The Fitbit app even proudly tells me five minutes of my time inside counted as cardio. Who needs the gym when you have life-threatening demonic peril? Thanks, Derren.

Thankfully my next challenge doesn’t involve other human beings hearing me squeak. From the safety of my own living room, I load up Paranormal Activity: The Lost Soul on PlayStation VR feeling somewhat trepidant. As a lover of the franchise – well, at least the first one and, oddly, the third – I know the demonic nasty that lurks in the very normal-looking houses of the series. The Lost Soul sees you arrive in one of these and, spoilers, never wants you to leave. Even in the tutorial, I’m instantly, horribly afraid. Despite a set of truly counter-intuitive controls that expect you to know where the face buttons are on the PlayStation Move wands, the atmosphere is foreboding and grim. The house creaks and groans gently around you as you find a torch and pop a battery inside and that’s before the randomised hauntings begin.

To try to deal with motion sickness, controls mean you can only turn in 45-degree increments, which makes traversal difficult and even more tense. This was built solely for VR and even on Sony’s relatively low-res headset, the environments look horribly real. It only takes the second rattle of a door behind me before The Lost Soul wins the accolade of being the first experience to force me to do the age-old ‘make things less scary in VR trick’ and take one headphone off. It doesn’t help in any way. I enter a darkened living room only to find the TV click on and I see the remote control floating ominously over the sofa. Every jump scare finds its mark and I’m left trembling in the house of horrors with an average heart rate of 90bpm and highs of 105bpm.

Next on the list is YouTube bait Don’t Knock Twice, also on PS VR. Just like Paranormal Activity, the game shares its ideas with a movie of the same name which is currently streaming on Netflix. Honestly, I don’t recommend either. Despite tackling the control issue with an easier teleportation mechanic via the Move wands and a few effective jump scares, Don’t Knock Twice is the hokiest of horrors. Thunder crashes outside, children laugh and at one stage, I pull a burning doll out of an oven. While the quiet, quiet, quiet, LOUD school of scares is obviously far more effective in VR, and there are more than a few moments where I find myself cowering in my own living room, this feels like the kind of ghost train you might laugh your way through at a travelling funfair. The hand controls feel off, the teleportation stutters occasionally and the feeling of immersion is constantly shattered by the sensation that I’m having to try far too hard to have fun. It shows in my heart rate readings. A relatively calm 88bpm is my new resting rate with highs of 97bpm at the jumps.

And finally, fittingly, I load up Oculus Rift exclusive Wilson’s Heart where a man voiced by Peter Weller wakes up in a 1940s noir hospital with a mechanical heart where his own should be. By this stage, I’m hoping for one of my own as I’m not sure how much more horror mine can take. Thankfully, Wilson’s Heart delivers a genuinely intriguing scary tale where jumps are almost incidental. It’s instantly clear that the Oculus Touch controllers are terrifyingly intuitive. Looking down at hairy arms and ultra-realistic hands, I yank shackles off my wrists before spending a little too long admiring the visuals on offer. Atmospheric just doesn’t cover this beautiful and horrifying monochrome world and the fixed teleportation points mean that the developer, Twisted Pixel Games, has made sure you see everything it wants you to. Flicking to silhouettes of Wilson with the press of a button makes traversal the least of your worries and the little nuances creep up your spine. I see a silhouette of Wilson looking upwards and do the same thing. It’s not spoiling anything to say that my heart rate spike of 106bpm is related to what I saw through the ceiling. Time for a cup of tea, I think.

This feature is from the new-look, relaunched T3 magazine! To get more features like this before anyone else in our stunning, new-look mag, subscribe today  or get the issue FREE with a trial of our custom-designed iPad version  or our Android app.