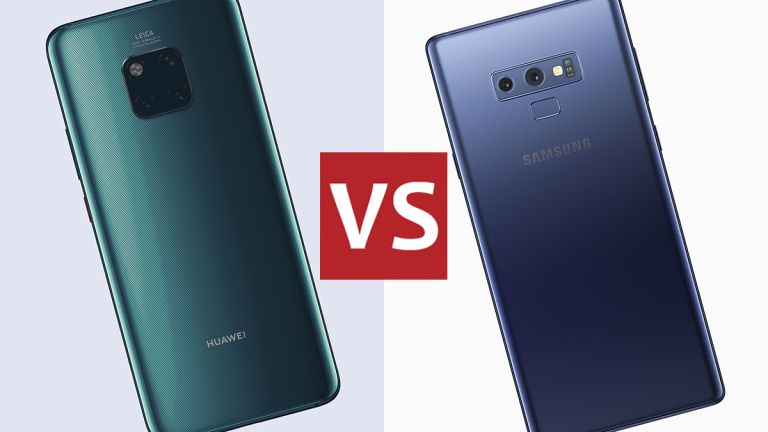 For some of us, only the smartphones with the biggest screens will do: and that brings us to the Huawei Mate 20 Pro and the Samsung Galaxy Note 9, two of the largest handsets launched during the course of 2018. But which is the better choice for your next phone?

There's lots to like about both of these phones of course, from the vast, high resolution, vibrant screens, to the top-of-the-range components running under the hood. We'll explain exactly how the two handsets compare so you can make an informed decision.

As for the overall looks of the phones, it's very difficult to pick a winner. Both the Huawei Mate 20 Pro and the Samsung Galaxy Note 9 have minimal, understated designs, with very little in the way of front-facing bezels on the displays. They both use glass on the front and the back, with an aluminium frame around the edges.

The Samsung Note 9 just has the edge in terms of the numbers of colours you can get it in: they add up to six in total (Metallic Copper, Lavender Purple, Ocean Blue, Midnight Black, Pure White and Alpine White), whereas the Huawei Mate 20 Pro is only available in five different colours (Emerald Green, Midnight Blue, Twilight, Pink Gold and Black). If you can spot your favorite in that list, that's one way of choosing between them.

In terms of the specs on show here, the Mate 20 Pro comes with the very latest Kirin 980 processor chip from Huawei, together with 6GB or 8GB of RAM, and 128GB or 256GB of internal storage (you can add another 256GB if you want to via the memory card slot). It's a super-fast, super-capable phone that should easily handle anything you want to throw at it, from top-end mobile games to immersive augmented reality applications.

Then there's the Galaxy Note 9 from Samsung. It has an Exynos 9810 or Snapdragon 845 processor chip inside, depending on where in the world you buy it, and that's accompanied by 6GB or 8GB of RAM, and 256GB of 512GB of internal storage (up to another 512GB can be added via memory card if you need it). Like the Mate 20 Pro, this is a real top-of-the-range handset, and the specs prove it.

But which one is best? The Kirin 980 has the slight edge in terms of raw power as a processor but overall there's very little to choose between these phones in terms of specs and performance. They're both going to be able to handle the latest apps and games on Android for years to come – so your investment should last a long time.

In case you haven't noticed, the Samsung Galaxy Note 9 comes with an S Pen stylus – one of the biggest differences between it and the Huawei Mate 20 Pro. You can use it to take notes, draw on the screen, operate the camera shutter remotely, and so on. If you think a stylus will ramp up your productivity, the Note 9 is the phone for you.

Photography is important for both the Huawei Mate 20 Pro (with a triple-lens 40MP+20MP+8MP rear camera) and the Samsung Galaxy Note 9 (with a dual-lens 12MP+12MP rear camera). The Huawei phone might have the edge in terms of lenses and megapixels, but both these handsets take excellent pictures, whether you're shooting soft focus portraits or images in low light.

Both these handsets come with IP68 waterproofing and dustproofing, and both support wireless charging. They both run Android with the manufacturer's own skin on top, though Android 9 Pie hasn't quite yet rolled out to the Note 9 – whereas it's already on the Mate 20 Pro. Finally, Huawei's phone has a fingerprint scanner embedded in the screen, if that's a feature you think you'll like.

We like to compare the very best phones here at T3, and the Huawei Mate 20 Pro and Samsung Galaxy Note 9 are certainly no exceptions. These are undoubtedly two of the best phones of 2018, and whichever one you pick, you're going to be sorted for performance and features for a good few years.

With specs and screen sizes very similar, the S Pen stylus that comes with the Galaxy Note 9 might be one reason for choosing Samsung over Huawei. The Mate 20 Pro does have that cutting edge in-screen fingerprint sensor though, which might be enough to tip the balance the other way for you.

In the end it might come down to which design or colour you prefer most, or whether you prefer the Huawei or the Samsung version of Android (we'd say the Samsung user interface just edges it). And if you really can't decide, don't worry about it too much – some brand new flagship phones will be along soon anyway.