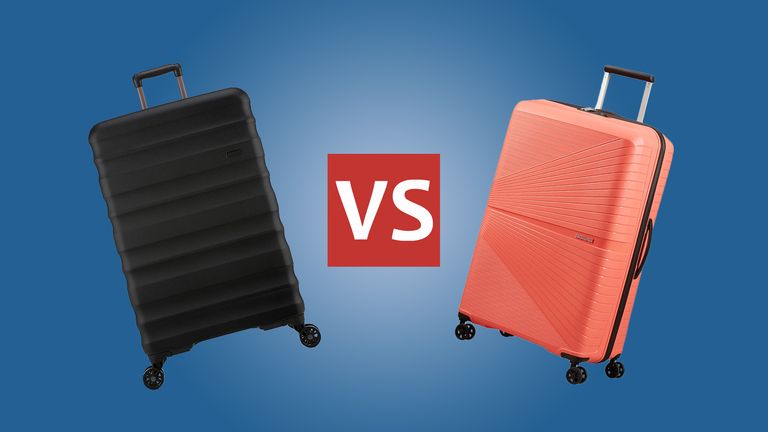 We all aspire to travel light with nothing but carry-on baggage, but sometimes you just have to go large. Whether you’re headed out on a long family holiday, a golfing getaway, or you’re going skiing with boots, a helmet and a lot of outdoor gear, the Clifton Large from heritage British luggage brand, Antler and the Airconic 77cm from Samsonite-owned American Tourister are large capacity suitcases designed to be ultra-light.

Need to travel heavy, but don’t want to go over that 23kg limit? The Antler Clifton Large and the American Tourister Airconic went with T3 on a ski trip recently, and here’s how they fared.

The American Tourister Airconic comes in three sizes; a 55cm, 67cm and 77cm. We tested the latter, which measures 77x49x31cm and holds 101 litres.

As well as having more native capacity, the Antler Clifton Large can go even larger; a second zip around the circumference opens-up and expands its capacity to a whopping 132 litres.

You do pay for that extra capacity with a little more native weight. The American Tourister Airconic – the brand’s lightest ever hardwire suitcase – weighs 3.2kg when empty, while the Antler Clifton Large clocks-in at 5kg. In practice, both are incredibly lightweight and easy to handle.

The Antler Clifton Large is made from Makrolon polycarbonate, a tough plastic with built-in flex, while the American Tourister Airconic is made from polypropylene, which isn’t quite as flexible.

You can find the best prices for the two suitcases in our widget below:

Either way, both of these suitcases initially look flimsy. The manufacturers will tell you it’s all about being ultra-lightweight, and that the moulded plastic used is as tough as it needs to be. From our test we can vouch for that, but there’s no getting away from the fact that they do at least appear to be rather insubstantial.

The material used in both suitcases is moulded plastic, so there’s some flex in terms of putting bulky items in. However, there’s no give in the (substantially curved) corners as you would find in fabric suitcases.

The outer zips themselves are reasonably good, though we found the Antler Clifton Large’s zips didn’t glide quite as smoothly as we had hoped when closing a heavy load.

Both suitcases feature largely identical interiors, with the designers employing the usual compression packing straps over one half, and a second half separated using a zip-around lid that itself includes a mesh netting area. However, the Antler Clifton Large adds a handy full-length zipped pocket on the inside that’s useful for storing sundries, as well as a waterproof slip pocket for toiletries (or perhaps some swimming gear still wet from a hotel pool). It also sports a subtle luggage tag on the inside.

Both suitcases have double-spinner wheels at each of their undercarriage’s four corners, each of which can spin through 360º. All sets of wheels performed well in our tests. Both deal well with uneven ground when fully loaded, such as drop-kerbs and rises, though they often need a little push to get across obstacles. Pushed alongside on all eight wheels, the Antler Clifton Large travels a little more fluidly, but both glide well enough, and can be dragged just as easily on four wheels.

Could those wheels get bashed off by airport baggage handlers? Possibly; they are attached to the exterior rather than built-in. Still, retractable wheels – which are the best for those after longevity (as well as a clean bed when you finally unpack) – are something of a capacity-bashing luxury.

Where these too suitcases do differ is on their telescopic handles. Since both suitcases come to quite a height, the handles themselves don’t extend too much. However, not only is the handle on the Antler Clifton Large noticeably tougher than that found on its counterpart, but also sports a nifty twist-grip that makes it much easier to move from pushing to dragging. As a bonus, both suitcases have a couple of grab handles on the top and side.

Both of these large suitcases are designed for taking as much as possible on a trip without wasting weight on the suitcases themselves. As such both do initially seem flimsy, but in use both made it around a few airports, across rough ground, up and down icy roads and in and out of various hotels with little more than surface scratches. The attraction of both of these lightweight suitcases is that you really can get an incredible amount of gear into them, and what they lack in innovative interiors they make up for in capacity. If you want a cheaper option that will do a fine job, the American Tourister Airconic is for you, while anyone after something as large as possible with the choice to go even bigger will find the slightly posher – and pricier – Antler Clifton Large the ideal travel companion for gear-heavy holidays.