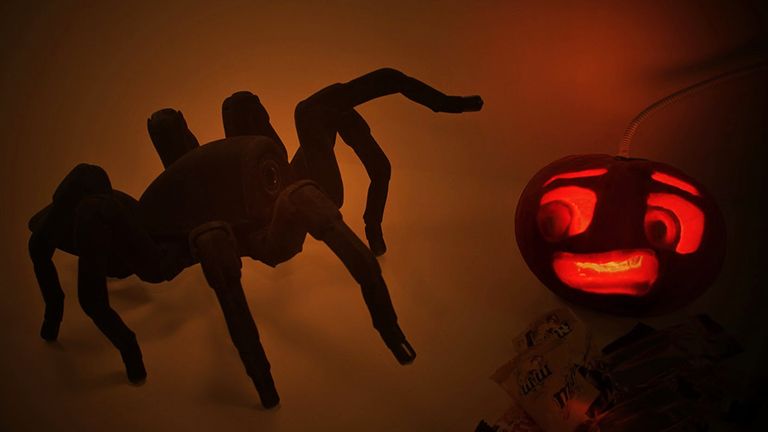 It's that time of year again – when carving a fruit is seen as a cool pastime, you try and get blood stains on your clothes and it's socially acceptable to scare the hell out of friends and strangers alike.

Halloween is bigger than ever in the UK, with more people getting to grips with ghoulish fun, transforming their digs into haunted houses and throwing petrifying parties. To help you furnish your house of horrors, whether you're after a few technie treats to accompany your pumpkins, or want to fashion an abhorrent abode the Addams Family would approve of, we've rounded up some top terrifying props, creepy costumes and apps available.

Arachnophobia is one of the 10 most common phobias and therefore a good place to start when attempting to make Halloween guests feel uneasy. For the ultimate spider scare, there's the Robugtix T8X - a spider-shaped robot with an eerily realistic movement. With 26 servo motors inside its body and algorithms to control each of its eight legs, the bot nails the creepy leg-rippling movement of a real arachnid. And what's more, it can be programmed to perform sequences or simply made to dash towards unwitting victims.

Pitch black darkness may be the spookiest lighting, but isn't practical for a Halloween party. Luckily it's easy to add some mood lighting with this spooky potion lamp that works like a charm. Looking as if it belongs on the set of Harry Potter, the Magic Potion Lamp, which appears to hold an unknown liquid and is stoppered with a cork bung, magically changes colour automatically, emitting an eerie glow. It also transforms from hue to hue in another mode by tapping the glass – wizard's wand and magical 'Lumos' spell optional.

Sure, you could wrap yourself in loo-roll to become a DIY mummy, or transform a bin bag into a sexy witch's outfit, but for a more impressive costume, consider making use of your phone. Morphsuits is behind a horrifying costume that comprises a torn white shirt that appears to show a beating heart inside a badly injured body. It's a clever trick using an iPhone displaying the pulsating heart in a silicone pocket that appears to be a gaping wound. There's also a skin-tight 'beating heart' Morphsuit, giving a similar effect, where the limbs are encased in Lycra to give the appearance of rotting zombie skin. Not for the faint hearted.

Any decent Halloween party requires some spooky background noise and monster hits – Thriller anyone? Any what better way to play some tunes than on a skull-shaped speaker. The AeroSkull Nano Bluetooth Speaker comes in matte black, blood red, chrome and gold and plays tunes via a MP3 player or phone, using Bluetooth. Hilariously, one of the skull's teeth glows blue to show when the connection is established. The bony boom box is designed to pack a punch with a powerful built-in amplifier and subwoofer, to blast out 8 hours of music on a single charge.

If you'd like to be ghostbuster but don't fancy wearing the uniform, there's an app to detect paranormal activity. Ghost Observer is claimed to be a 'professional quality tool to detect, observe and communicate with ghosts,' recording and analysing paranormal activity. Apparently, each ghost has its own electro-magnetic signature that can be processed to work out their characteristics and history. The app allows users to hear the voices of ghosts, translate what they are saying, play Ouija board, share any appearances and more - but it should be used for entertainment purposes only, apparently.

In the absence of summoning real ghosts and ghouls from beyond the grave to scare the living daylights out of your neighbours and trick or treaters, you could try a digital illusion. AtmosFx makes 'digital decorations' that seem to conjure ghosts, zombies and other supernatural beings with the help of a projector or TV set and a digital download or DVD. For example, you could project a terrifying flying phantom against a window to look as if it is swooping for anyone approaching the house, or create eerily realistic 'hollusions' - holographic illusions using a projector and mesh. There are 13 AtmosFEARfx Digital Decorations to choose from, from zombies to phantoms that range from the bed-wettingly terrifying to fun and child-friendly.

For some people, clowns are the scariest, but the stillness and eerie realism of mannequins can make your skin crawl too and have starred in horror films such as Pins, The Fear and most recently, Maniac. Now there's a six-foot animatronic mannequin prop for your party. Her head, arms and torso move in an uncanny way that might make someone jump and her eyes flash menacingly whenever someone comes near, thanks to motion and sound sensors in the elaborate prop. Perfect for haunted houses, there's even one in the Big Brother house – scary stuff.

Playing dress-up at Halloween is the perfect time to temporarily turn to the dark side. You can try on the personal of an Imperial Death Trooper with a plastic mask by Disney. It lets the wearer morph their own voice into that of one of the evil henchmen that will feature in the eagerly anticipated film, Rogue One: A Star Wars Story. The mask has a moulded plastic front and adjustable straps so it fits well, as well as lights. And if you want to be more classically evil, there are Darth Vader and Storm Trooper voice-changer masks too.

Making a run even more horrifying

Going for a run strikes fear into the hearts of many. But how about a run during the zombie apocalypse? The Zombies, Run! app imagines the user is on their way to one of humanity's last outposts and that they can help gather supplies, rescue survivors and defend their home. They hear their mission and music and have to speed up to avoid approaching zombies – a good motivator if ever there was one. There's 200 missions available and interval training, with users reporting it helps them run faster for longer to help them get dead fit.

Guard for the gates of hell

Last but not least, take some inspiration from Harry Potter (and other far older yarns) by using a three-headed dog to guard your Halloween party. Cerberus – otherwise known as the Hound of Hades – is available to own in the form of an animatronic model. The crazed guard dog has three gaping mouths filled with sharp teeth and glowing red eyes to greet partygoers. When wired up to a motion sensor and fog machine, the result is otherworldly. As a person approaches, the scary robot growls increasingly loudly and its body shakes manically.