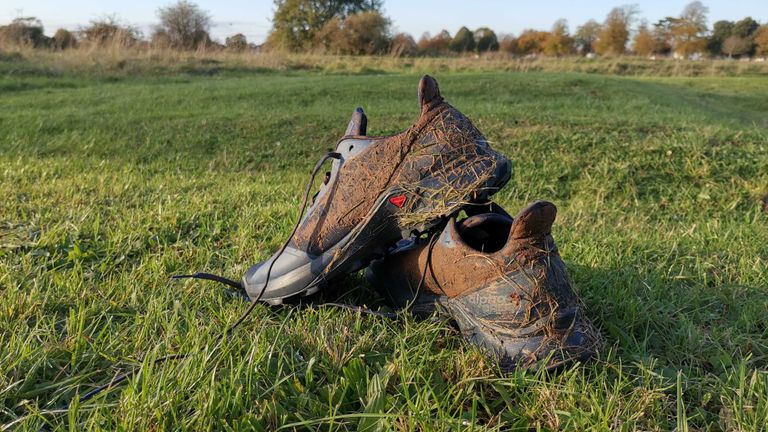 The Salomon Alphacross will be a great partner on dryer trail running training days. It provides a good, yet not too tight fit and thanks to the aggressive heel drop, it will keep you going forward, let it be uphill on a slope or downhill on a forest trail. Some more weather-proofing would have been great, though.

We take running shoe reviews seriously here at T3. So, for this Salomon Alphacross review, I decided to run a 10k trail running race on one of the worst days of the year, with rain coming down like there is no tomorrow and wind strong enough to push you off the trail.

And although the Alphacross is more of a training shoe, I thought testing it on a race with no-stakes will be the perfect opportunity to see what they really worth.

• Buy the Salomon Alphacross on Amazon

The Contargip outsoles provided enough traction even on muddy and slippery forest trails for me not to worry about breaking my ankles and faceplanting after coming in contact with roots.

On the other hand, as much as the ripstop upper can withstand some weather abuse and jumping in shallower puddles, it is definitely not fully weatherproof and therefore the Salomon Alphacross is recommended mainly for dryer weather conditions.

Trail running shoes in general need to be more sturdier than their road running counterparts, especially the upper fabric, but also the soles. Running on road, you won't encounter so many different surfaces and most usually you don't have to climb or ascend slippery surfaces either (generalising here a bit).

Salomon shoes are renowned for their ergonomics, hence why see so many people run in them on trail running races. The rubber chevrons on the Contagrip TD outsole claw into any surface they get in contact with, giving you enough traction to push yourself forward when needed and slow you down when descending hillsides.

The EnergyCell midsole sports an EVA foam construction and feels neutral as you run. It has a good firmness/flexibility balance, so you won't feel every root and small rock digging into your sole, but will bend and provide a softer landing.

On the inside, you'll find the OrthoLite insoles, or more like inserts, which is a cheap and cheerful solution from Salomon to provide some cushioning within the shoes. Price conscious decisions are understandable when the price is so low, but saying that, the Salomon Alphacross doesn't feel cheap or uncomfortable.

The upper fabric is stitch-free and has a smooth feel, but unfortunately not weatherproof, as one might expect when you look at the Alphacross. On the other hand, it does resist tearing, ripping and abrasion, something that can come handy in a hostile environment that is a forest trail. The lacing is pretty straight forward.

As for fit, Salomon describes it as "generous", something I hoped didn't mean 'loose', but thankfully the Alphacross is a good fit. The heel counter could hold the heels a bit firmer, though. The toebox is flat but not suffocating and the cushioning around the ankles provide enough support without breaking your skin.

The Salomon Alphacross looks aggressive, due to the chevrons being visible from all angles and the heel drop high heel drop (10 mm). It gives the Alphacross a dynamic look, like a racing car, ready to go all the time.

The stitch-free upper fabric patch together a couple of different materials, most noticeably around the big toes and the outside edge of the front of your feet. the reinforced material around these areas provide extra support when turning.

The long tongue covers the front of your ankles, where you are most likely to encounter loose twigs and stinging nettle leaves on your runs. The fabric around the back of the heel also curls up these two features enveloping your ankle without restricting it on the sides.

There is a little contrast panel on the side of the outsole which looks like a button and serves no function (as far as I am concerned) but to advertise the ContaGrip technology. Gives something extra to look at, though.

If you ever attended a trail running race before, you have probably seen a lot of Salomon shoes, for a good reason.

The ContaGrip outsole will help you climb better and descend safer, thanks to the rubber chevrons providing traction in all the right areas.

The EnergyCell midsole has a neutral feel to it, firm enough so indentations on the surface won't bother your soles but flexible enough so you can turn more freely. The OrthoLite insert is a cheap and cheerful way to provide some comfort in the shoesm but all in all it does the job just fine.

The ripstop upper can withstand some abuse but it is definitely not waterproof. If you are looking for something that will not let much water in, get the Salomon XA Pro 3D CS WP.

The Salomon Alphacross is not a bad looking shoe with its slimmer contour and stitch-free upper fabric. The visible rubber chevrons and the 10 mm heel drop gives them a more aggressive, ready-for-anything look.

• Buy the Salomon Alphacross on Amazon