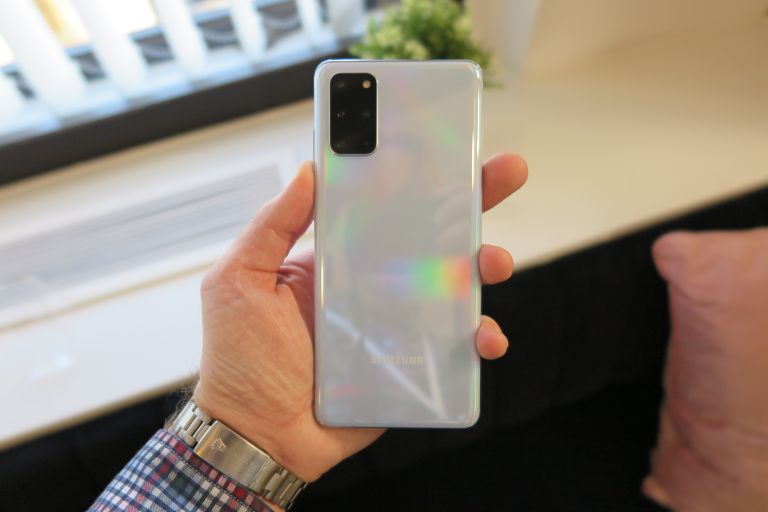 Welcome to T3's early verdict Samsung Galaxy S20 review. We've gone hands-on with the South Korean manufacturer's new range of flagships (including the top-end device in the range, the Samsung Galaxy S20 Ultra) to bring you everything you need to know about the new handsets. This is our (very) early verdict on the S20 handset, with a full review to follow once we've used it for a few weeks.

To make the review as easy as possible to navigate, we've split it up into several sections: design, screen, camera, hardware and price and release date, so you can get a comprehensive look under the hood of the Samsung Galaxy S20.

Although it's not as expansive as the rest of the range, the screen more than holds its own. The high-definition AMOLED screen is colourful, crisp and sharp. The 120Hz refresh rate provides clean, silky-smooth movement as we swipe through the phone's home screen options, and it's hard to describe just how good this is: the slick motion almost feels tactile as you slide through screens and scroll through apps, all with Samsung's excellent UI 2 interface.

It's a perfect compliment to the easy-to-navigate Android 10.0, creating a genuinely enjoyable user experience. If you think your current smartphone looks smooth in motion, just wait until you try this.

In terms of build quality, it's just 6g heavier and 0.1-inch bigger than the Samsung Galaxy S10. The S20 base model feels like a natural extension of what came before, even if the new range's upper-tier entries deviate more significantly.

However, the smartphone manufacturer has made some key changes to the base device. The phone even carries softer curves than last year's model, with more rounded corners pairing with the silky refresh rate to create a more aesthetically pleasing, softer device to both hold and use.

This time round, the selfie camera is no longer tucked in the corner but back in the centre of the phone's forehead. Moving to the back, the raised camera module is no longer horizontal but vertical, arranged to the right-hand side of the phone rather than centred as the Samsung Galaxy S10's was.

The module is perhaps too prominent, as we can easily see caseless phones landing camera-first when dropped. This is a great phone in so many respects, but we don't believe it'll prove particularly durable without proper protection.

Samsung has placed great stock in the camera equipment of all three devices, and they don't disappoint. They are the star of the show, dominating a big chunk of the back of the handsets with their distinctive rectangular modules.

The 12MP ultra-wide and wide-angle lenses are clear and responsive, and as it says on the tin, the wide angles proved great when capturing groupshots and scenery snaps. However, the real stars of the show are the 64MP telephoto lens and the "space zoom" features, which will zoom up to 30x in "super resolution".

It's easy to see why the phone was nicknamed "Hubble" during production, as budding astrophotographers will feel right at home. We'll be able to test these features in more detail, especially the 30x zoom, once we get more time with the phone.

Now comes the guts. The three models in the Samsung Galaxy S20 range are all equipped with the same processor, the Exynos 990 CPU (a Snapdragon 865 in the US), and an Adreno 650 GPU. It's a powerful pocket rocket, able to process complex files (such as, oh we don't know, super-resolution pictures of the night sky) without breaking a sweat.

Is there so much difference in the power consumption of the Ultra that it merits such an increase, or has the S20 been shafted a little on the battery front in order to make the Ultra seem more premium? We'll only know once we get a few days with the phone, to figure out how the battery holds up from new.

The phone also includes the now-familiar underscreen fingerprint sensor and facial recognition of its predecessors. 5G support for the phone is available, but its unclear yet whether there will be a 4G-only version of the Samsung Galaxy S20.

The Samsung Galaxy S20 pre-order date, like the rest of its range, is 11th of February, 2020. This is the date when pre-orders for the phone will open, with the available pre-order period last until March 8th.

To incentivise customers to pre-order, Samsung is giving away a free pair of Samsung Galaxy Buds+ true wireless earphones along with the purchase, and will also receive their phone a few days earlier than general release – which, if you were wondering, is March 13th. Prices start at £799.

At this early stage, the Samsung Galaxy S20 is a fine improvement over its older sibling, the Samsung Galaxy S10 – although it hasn't reinvented the wheel. It shows off advancement in every way, as a flagship should, and its crisp picture, flowing refresh rate and first-rate camera will ensure the device is a hit.

However, there's a long way for the device to go yet. All this has been gleaned from our too-short time with the phone. To review it properly, we'll need to spend some more time with the device in our pocket, figuring out how the handset fits in our day-to-day life. For example, will the incredible 120Hz refresh rate prove too draining on the battery, causing us to revert back to 60Hz? How will the camera features fare during more rigorous testing?

It's questions like these that we'll need more time to answer. For now, colour us impressed with what we've seen – but we acknowledge having only seen a fraction of what it can do.