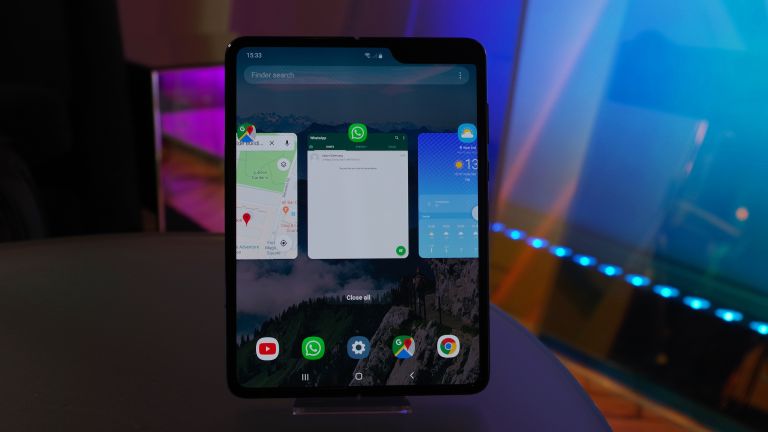 The Galaxy Fold release date will be delayed indefinitely, Samsung has confirmed.

The feverishly-anticipated new folding smartphone, which was scheduled to launch in the United States on April 26 and in the UK on May 3, has been pushed back following a number of issues with review units handed to US publications.

Pre-orders for the £1,800 handset ($1,980, €2,000) had already gone live in the United States, purportedly selling out in a matter of hours, while UK pre-orders were scheduled to go live on April 26, 2019. Mobile carrier EE is the exclusive network partner for the Galaxy Fold in the UK. Monthly contract pricing is not yet available.

Samsung has not confirmed how long the delay is likely to be, although it says it hopes to announce a rescheduled release date in "the coming weeks".

It's also keeping shtum about whether there'll be an opportunity for those who placed a pre-order but might now be having second thoughts to get a refund. However, it has confirmed those who placed pre-orders will not be charged until the handset ships, so at least the company isn't billing customers for the delayed device.

In a statement confirming the global release date delay, a Samsung spokesperson said: "We recently unveiled a completely new mobile category: a smartphone using multiple new technologies and materials to create a display that is flexible enough to fold. We are encouraged by the excitement around the Galaxy Fold.

"While many reviewers shared with us the vast potential they see, some also showed us how the device needs further improvements that could ensure the best possible user experience. To fully evaluate this feedback and run further internal tests, we have decided to delay the release of the Galaxy Fold. We plan to announce the release date in the coming weeks.

"Initial findings from the inspection of reported issues on the display showed that they could be associated with impact on the top and bottom exposed areas of the hinge. There was also an instance where substances found inside the device affected the display performance."

"We will take measures to strengthen the display protection. We will also enhance the guidance on care and use of the display including the protective layer so that our customers get the most out of their Galaxy Fold."

The screen on my Galaxy Fold review unit is completely broken and unusable just two days in. Hard to know if this is widespread or not. pic.twitter.com/G0OHj3DQHw17 April 2019

Here is a review unit of the #GalaxyFold from Switzerland @Blickch It looked and felt like a grain of sand. Was there for an hour or so and disappeared. But still disturbing. #foldgate pic.twitter.com/RhKn3FqvHsApril 21, 2019

The Galaxy Fold does not hold an IP rating, like its dust and waterproof siblings: the Galaxy S10 and Galaxy S10 Plus. The hinge mechanism itself is open to the elements at the top and bottom of the device to allow it to open and close smoothly.

Based on the (admittedly, scant) details in this statement, it sounds as if autopsies on the first failed review units have revealed that materials can become lodged in the hinge mechanism and contributed to the failing folding displays.

Carrying a smartphone around in your backpack, handbag, or pocket every day is always going to result in a small amount of debris, lint, crumbs and the like ending up inside the charging port, headphone port, and in this case, the opening at the top and bottom of the hinge. As such, it seems weird this hasn't cropped up in testing.

Samsung told T3 this foldable handset has gone through 1,000 different prototype versions over the last 10 years – it seems odd this issue, which has claimed four review units in the last week by our count, didn't crop up at all.

The promise to "take measures to strengthen the display protection" sounds like we could be in for a lengthy wait, too. Strengthening the protection of an all-new display technology that's been a decade in the making doesn't sound like a five-minute job.

The other issue that appears to be plaguing these pre-release Galaxy Fold review units is the external layer of the 7.3-inch Infinity Flex display appears exactly the basic screen protectors that ship on most modern phones to keep the glass display pristine during shipping.

It turns out it isn't. In fact, it's a crucial part of the folding screen and removing the layer, which is possible to do, severely weakens it. The first review units purportedly did not include a warning about screen protector, which can be unpicked at the corners of the display.

Samsung seems to suggest that this will be changed in the final consumer version of the product, adding "we will also enhance the guidance on care and use of the display including the protective layer" at the end of the statement.

PSA: There's a layer that appears to be a screen protector on the Galaxy Fold's display. It's NOT a screen protector. Do NOT remove it.I got this far peeling it off before the display spazzed and blacked out. Started over with a replacement. pic.twitter.com/ZhEG2Bqulr17 April 2019

The phone comes with this protective layer/film. Samsung says you are not supposed to remove it. I removed it, not knowing you’re not supposed to (consumers won’t know either). It appeared removable in the left corner, so I took it off. I believe this contributed to the problem. pic.twitter.com/fU646D2zpYApril 17, 2019

With all of these changes planned for the Galaxy Fold, is it possible the device will be pushed back to a summer release? That would allow plenty of time to rectify these early issues. Samsung purportedly already plans to hold Galaxy Unpacked announcement in August to launch the latest entry in the Note series, dubbed Samsung Galaxy Note 10 anyway, so it would make logical sense.

But will those who've placed pre-orders be prepared to wait that long? And will that delay mean Samsung loses its crown as the first company to launch a folding smartphone worldwide to the Huawei Mate X.

T3 has approached Samsung for comment on this story, including the impact this delay will have on UK pre-orders, originally scheduled to launch on April 26, 2019.

Texts:
Domestic & International Text to select countries
Free
upfront
$75.42
/mth
View
at
Sprint
See all prices
We check over 130 million products every day for the best prices
View All Deals
powered by