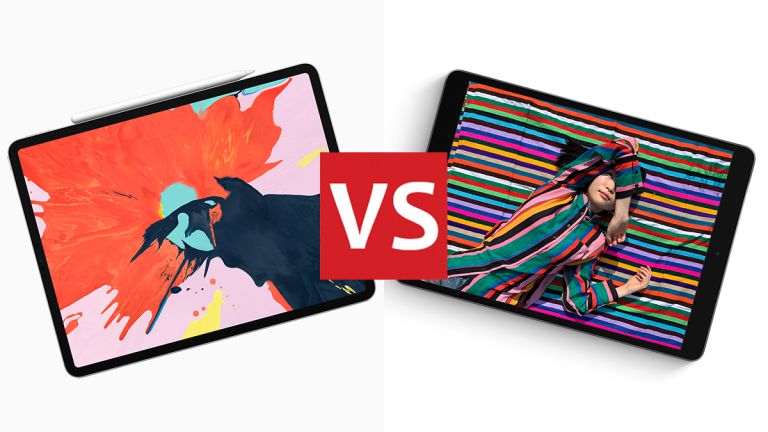 The iPad Pro (11-inch and 12.9-inch models) and the iPad Air (10.5-inch) – two great Apple tablets, packed with features, so how do you go about picking between them? Which one is right for your needs and your budget? Here we'll try and help you make the right choice.

From the design of these three tablets (two iPad Pros and one iPad Air), to the software features you get on board, we'll lay out the differences and the similarities between them – and try and decide which one comes out on top taking everything into consideration.

The latest iPad Pros brought with them a stunning redesign of the iPad template, as the home button and Touch ID were ditched in favour of a slimline, minimal bezel approach and Face ID login. The iPad Air is by no means a bad-looking tablet, but the iPad Pros have the benefit of looking more modern.

You get more screen-to-body space with the iPad Pros, which means the 11-inch iPad Pro is actually a shade shorter than the 10.5-inch iPad Air (though it's also a little wider, too). Where the iPad Air does win out is in the weight – it's the lightest tablet of the bunch, tipping the scales at just 456 grams (1 pound).

If colours are important to you, all three of these iPad models are available in silver and grey, but only the iPad Air comes in a rose gold finish as well – if that's a tablet look that you're particularly fond of, that's one reason to buy the cheaper model. Overall though, we'd say the minimal design approach of the iPad Pros is more appealing.

The iPad Pros also offer more in terms of storage, though a variety of configuration options are available whichever tablet you choose. You can pick up an iPad Pro tablet with 64GB, 256GB, 512GB or 1TB of storage, while the choices with the iPad Air are 64GB or 256GB. Apple doesn't officially state RAM specs, but the iPad Air is believed to have 3GB of RAM inside, while the iPad Pros have 4GB or 6GB depending on the configuration.

Both tablet models are available with cellular connectivity, if required, so you can pick between Wi-Fi only and Wi-Fi+cellular models, depending on what you need and how much you've got to spend.

In terms of the display, besides the differing sizes, the iPad Pros also offer ProMotion: a variable refresh rate up to 120Hz, for the apps and games that need that extra responsiveness. It's also worth noting that the iPad Air offers a Lightning connector port and a 3.5mm headphone jack, while the iPad Pros just have a USB-C port. In addition, the iPad Pros support the 2nd-gen Apple Pencil, while the iPad Air works with the 1st-gen model of Apple's stylus.

One area where we can't separate these two tablet models is in the software: both run the latest iOS 12 software at the moment, with Screen Time and Animoji and everything else, and both will get upgraded to the iOS 13 software when it arrives later this year.

Based on everything we've covered so far, the iPad Pros are definitely the better tablets – better designed, faster specs, support for the latest Apple Pencil, and so on. But are they the better value? There's a significant £290 difference between the starting price of the iPad Air and the 11-inch iPad Pro, with the 12.9-inch iPad Pro another £200 on top of that.

That's a lot of money, especially when you consider that these tablets all run iOS 12 and all have more or less the same set of features. The question is why would you spend the extra if you don't need to – you might want the extra screen space of the top-end iPad Pro, for example, or the slightly better cameras, but it's not an easy call.

The good news for potential tablet buyers is that Apple now gives us the choice. You can save money on the less expensive iPad Air, with its older styling and slightly slower processor, or you can splash the cash on the modern-looking, super-fast iPad Pros. Whichever model you go for, you shouldn't end up disappointed.