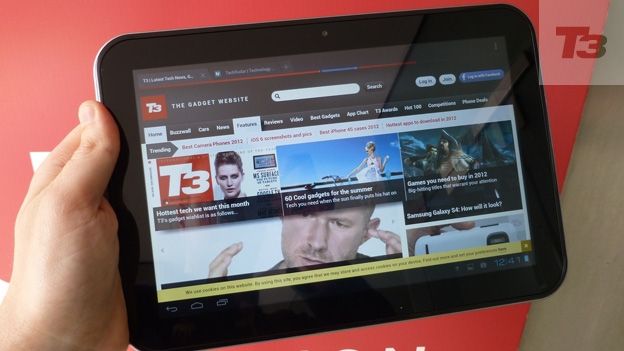 The follow-up to the world's skinniest 10-inch tab – the Toshiba AT200 – the Toshiba AT300 adds a few millimetres to the waistline but packs a much healthier engine room in return.

Unlikely to do battle with the likes of the Asus Transformer Pad Infinity or the latest iPad at the upper echelons of the tablet hierarchy, the Toshiba AT300 will instead sit alongside the likes of the Acer Iconia Tab A510 and the Asus Transformer Pad 300 in a newly emerging tablet market – one which offers the latest hardware and software, wrapped in mediocre chassis, for a much more affordable price.

We're not talking budget crap-tabs here – at £329 for the 16GB version and £50 more for 32GB of space, the Toshiba AT300 is certainly not cheap – but they are price-tags that make the slate much more accessible than the likes of the new iPad, which comes in at £70 or £100 more, depending on your storage desires.

We stated mediocre in the intro for this new breed of middle-shelf tabs and that's exactly what you've got when it comes to the build the Toshiba AT300. Instead of the brushed metallic finish you're treated to on the top tabs, the AT300 is predominantly plastic, aside from the Gorilla Glass front.

At 8.5mm thick, it is around 0.8mm thicker than its anorexic older brother, the AT200, but that's still a waistline the new iPad 3 brigade will be envious of as the Apple slate measures 9.4mm. At 590g it is also around 10 per cent lighter than its Cupertino rival.

The textured back panel does feel nice in the hand and the smooth trim, and shiny Toshiba logo, does give a slight whiff of grandeur. The way the trim seamlessly curves into the side edges is also nice, although we don't really like the noticeable lip between the bezel and the display around the front.

That display is, as mentioned, a tough Gorilla Glass one – so you should have no issues with scratches and scuffs if you chuck the AT300 in your bag for a day out and about. It's a 10.1-inch screen boasts the same 1,280 x 800 resolution as the Acer Iconia A510, the Asus Transformer Prime and the Asus Transformer Pad 300.

It's a display that holds up pretty well in day-to-day usage scenarios, with decent contrast and rich colours, although we did find that it attract fingerprints and smudges with ease and it was also incredibly reflective in bright sunlight.

Back-light bleeding when viewing dark images and movies is also a small issue – although that may just be us being extra-picky.

The Toshiba AT300 runs Android 4.0.3 - Ice Cream Sandwich - which, until recently at least, was Google's latest mobile operating system. Android Jelly Bean has, of course, since landed and we haven't heard yet whether the AT300 will be getting an upgrade.

However, ICS is still a fantastically slick OS and luckily Toshiba has done little to alter the good work of Uncle Goog. It's about as native as it gets and we say that's a great thing.

Like it does with its laptops however, Toshiba has decided upon a pre-installed set of software packages that you simply cannot live without.

Apps such as Toshiba Places, McAfee Security, ThinkFree Office, TuneWiki, Splashtop HD Free, Skitch and Toshiba Service Station are all loaded on the AT300 out of the box – although it's simple enough to remove these should you not share Toshiba's enthusiasm.

It's easy enough to get your media loaded up onto the Toshiba AT300 with a plethora of port activity taking place on the tab's edges. There's Micro-USB, Micro-HDMI and a full sized SD card reader which is great for loading your digital camera's photos. Of course, there's also a 3.5mm jack port for plugging in your headphones.

The strongest point of the Toshiba AT300 by far is it's quad-core power, courtesy of a 1.3GHz Nvidia Tegra 3 CPU along with a healthy 1GB of RAM.

This processing engine means that you'll have no worries when it comes to playing back some of the more demanding games from Google Play and your HD movie watching will be stutter free. Load times between apps is also blazingly fast and you'll experience no troubles when multitasking.

Sound, from the two very noticeable speakers on the top edge, is okay – although no tablet is perfect in this respect and you'll definitely want to make use of the 3.5mm port and your headphones if you're planning on a movie or music session.

On the front is a 5-megapixel camera that, like most tablet cameras, takes awful pictures, polluted with grain and blur. The 2-megapixel on the front will come in handy for video chatting though.

Toshiba states that the Lithium-ion polymer battery will provide 10 hours of video playback, 36 hours of audio playback and 168 hours on standby. In our intensive battery test which involves non-stop streaming and playback of HD video, with the brightness turned up full, it recorded around six hours of life-time, which indicates that the manufacturer's promises are about right.

One irk we did have regarding the battery though, is that the Toshiba AT300 doesn't charge through its Micro-USB port but rather through Toshiba's proprietary port. We know Apple, Asus and Samsung are guilty of the same crime with their tabs but it doesn't make it any less annoying and Toshiba's charger is by far the bulkiest of the bunch.

The Toshiba AT300 isn't going to cause anyone's jaw to drop in terms of looks – it's only once you get this quad-core monster fired up that you'll appreciate its inner beauty.

The Nvidia Tegra 3 power on board makes using the Toshiba AT300 a pleasurable experience and sets it apart from tablets that come in under the £300 mark. There's also plenty of port-action going on, making it easy to access an transfer your digital data and the full sized SD card reader is incredibly handy for loading up images from a digital camera.

The price-tag puts it on a par with the Acer Iconia Tab A510 and the Asus Transformer Pad 300, two tablets that we at T3 are fond of, and with the cost and performance much the same with these – it's really down to personal preference as to which mid-range tablet is best for you.