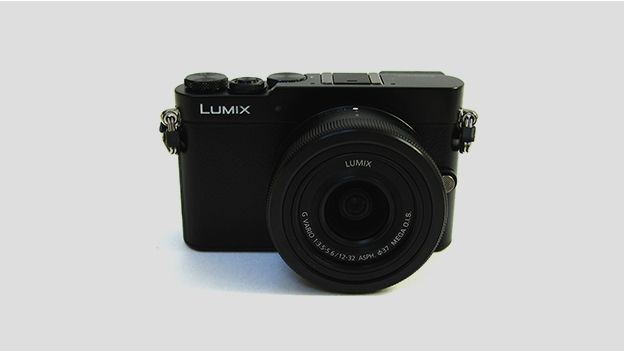 Coming after Panasonic's smallest ever GM1 interchangeable lens camera on launch, the GM5 adds an eye-level viewfinder and hotshoe for attaching the flash bundled in the box. Does this make it the complete pocket-sized package?

The size of a pack of playing cards, the 16 megapixel, metal and plastic build Panasonic Lumix DMC-GM5 joins its maker's smallest-ever interchangeable lens system camera, the prior issued GM1, in the Lumix G line up; one that includes plain G, GH and GX models. Like its forebear, which offered an identical maximum resolution, this is a pocket camera that, more than ever, harks back to yesteryear whilst remaining bang up to date in terms of mirror-less camera tech, including once again a Four Thirds ratio sensor, larger than that found in the point and shoot compact the GM5 resembles. Offering more of a premium-feel design however, it comes complete with mottled leather effect faceplate, more evident on the 'Ferrari red' option than the serious-looking all-black GM5 we had in to examine. This proved to be more a cosmetic feature than a practical one, as it didn't greatly aid us in holding the camera in the absence of an actual grip. That said at no point did we feel we were in anger of the Panasonic slipping from our grasp.

Small format rivals include the Samsung NX Mini and Sony A5100, which both offer the tilting back screen that the GM5 omits, but omit the newly-implemented killer feature here: an eye level electronic viewfinder, or Live View Finder as Panasonic refers to it. Resolution is a sharp million dots plus. We also get a hotshoe for the attachment of accessories, a feature missed off the earlier GM1, meaning that the GM5 offers possible expansion opportunities. These new 'extras' have however meant that there is no room now for a built-in flash. Instead we get a small clip on FL70 flash provided in the box with the GM5, which is fine, but obviously we've got to make a mental note to pack it with us when required.

There are a couple of buying options with this camera, neither of which are particularly cheap. There's the choice of a black-bodied GM5 with matching 15mm Leica branded lens for a suggested retail price of £1,049, or the slightly more affordable alternative of red or black body with Panasonic branded 12-32mm kit zoom, which offers the 35mm film equivalent of an ultra wide angle 24-64mm focal range. This comes in at £769, though we found online deals roughly £100 less than both of these asking prices at the time of writing. So, the question is, does buying a GM5 warrant a similar investment to what one would make for a mid range or semi pro digital SLR?

As far as operation goes, this is a pretty straightforward camera that is easy to get to grips with, its layout falling between the top plate wheels – including separate drive modes and shooting modes – plus backplate dial that recall an enthusiast model, and the small fingernail-operated rear plate buttons and cross keys that will be immediately familiar from your regular point-and-shooter. A half squeeze of the shutter release button here and response times on this Panasonic are blink and you'll miss it swift – with auto focus officially locking onto target in 0.06 seconds, meaning that we're more than likely to be able to capture those split second photo opportunities.

It's worth noting however that if you're using the 12-32mm kit zoom that came with the camera, you'll first have to manually unfurl and extend it to maximum wide angle setting before the camera will be able to take the shot. While the fact that it I retractable makes for the most compact lens and camera combo, it does mean that you'll need to an extent anticipate when you'll need to get camera and lens ready.

The major difference between the older GM1 and newer GM5 is obviously the fact that it now offers users two screens: a tiny eye level viewfinder and larger 3-inch screen below. The smaller viewfinder offers the higher resolution of the two however at just over one million dots, meaning that it's sharp despite being pokey, with the main LCD offering a more standard for its class 921K dot resolution.

While the view through the EVF is clear, the eyeball recognising sensor alongside it is a little sensitive in that, when this mode is on, a brush past if a finger will activate it, immediately turning off the larger screen below. Happily a shared LVF/Function button beside it ensures you can choose between having the EVF always on, the LCD always on or switch between the two automatically via the sensor operation as described.

Battery life of 210 shots if using the integral viewfinder, or alternatively up to 200 if using the rear plate LCD is comparable the basic point and shoot camera the GM5's body proportions resemble, but disappointingly falls somewhat short – by 100 images or so – of what we would normally expect from a compact system camera in this price bracket. The slightly physically larger Olympus E-PL7 for example offers around 350 shots when fully charged, which while pretty average itself taken in comparison with most system cameras, seems a better deal judged against the Panasonic.

As we've always found with Panasonic cameras, picture quality comes first and images straight out of the camera rarely require much if anything in the way of adjustment – with the ability here to shoot unprocessed Raw files in tandem with JPEGs, or capture them separately also. While there may be a very slight fisheye effect when shooting at maximum wide angle, it's hidden better by natural locations and subjects. The other notable aspect to mention is that the overall compact dimensions of the package – as well as that wide angle lens – lend the GM5 very well to candid street photography.

As you manually zoom in and out with the lens provided on this camera – though mechanised 'Power Zooms' are also available via Panasonic – it takes a degree of skill and practice to operate the zoom when shooting video. This we found it best to set the focal distance required before pressing the red record button and merely pan with the subject for good results – face detection automatically picking out human subjects in the frame one by one, and biasing whatever you've put centrally in your composition. As subjects move backwards and forwards in the frame, or you pan the camera, the auto focus will helpfully automatically adjust, meaning that if the image does go soft, it only stays that way for a second or two before it drifts back into pin sharpness.

Given its solid-feel body construction, size and consistency of performance, the 16 megapixel Panasonic Lumix DMC-GM5 was the camera we found ourselves most often reaching for when heading out to shoot something, which in itself speaks volumes. The smaller size meant that we are going to be taking it out with us more often than we would a DSLR with equivalent lens, which is kind of 'point proved' as far as the usefulness of smaller format mirror-less system cameras goes.