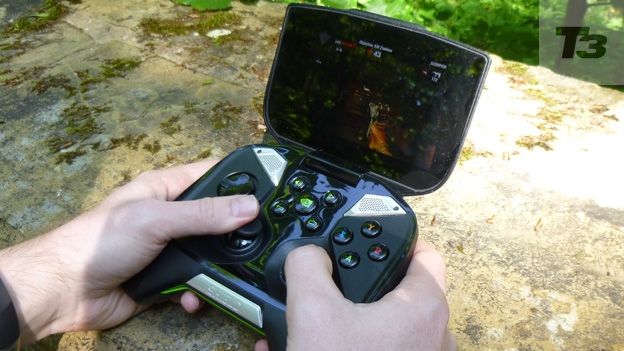 There's nothing quite like the Nvidia Shield. With its traditional game controller, it's competing with portable games consoles like the Sony PS Vita and the Nintendo 3DS. But it's got more in common with smartphones like the Samsung Galaxy S4, thanks to its Android operating system and 5-inch touchscreen display.

It also does something no other device can - it will stream full PC games from a local computer. Is this the handheld games console to rule them all?

Nvidia Shield is a beast of a handheld - way bigger and heavier than any handheld games console or mobile phone currently on the market.

The clamshell design is 158mm x 135mm across and 57mm high when closed, or three PS Vitas stacked on top of each other. That makes it impossible to fit into a pocket, unless you wear unbelievably baggy jeans. It also weighs 579g, or the equivalent of more than two PS Vitas, so you'll definitely feel it in a bag.

The clamshell design is also rather cumbersome - like a screen and controller have been awkwardly bolted together. That said, the console is solidly constructed and the controller is very ergonomic - this is one of the few controllers to give the Xbox 360 model a run for its money.

Nvidia has made the most powerful handheld console ever, and while it's sure to be usurped quickly in the fast-moving world of mobile technology, in the here and now it's the most advanced device on the market.

The star of the show is the Tegra 4 processor, which is one generation ahead of the Tegra 3 chipset used in tablets like the Sony Xperia Tablet S and phones like the HTC One X. It gives compatible Android games (marked with a THD moniker on the Google Play Store) a major graphical boost, with titles like Shadowgun and Sonic 4 Episode II up to home console standards.

The device itself also boasts all the inputs you'd want from a modern portable device. You can expand the 16GB of internal storage with a MicroSD card, and a recent software update now allows you to move apps and data between the two.

There's also a Mini-HDMI output for connecting the device to a display, Micro-USB 2.0 for charging and data transfer, and fast 802.11n wireless.

It's also worth noting that the system runs Android Jelly Bean 4.2, and Nvidia's implementation of Google's Operating System is completely free of needless bells and whistles. This must have helped Nvidia eke a solid six hours of battery life out of the device.

We were pleased with how loud the stereo speakers went for a mobile device, although they still lack quality in the bass. The only major thing that's really missing from Shield is any form of camera - a front-facing lens would have been a nice addition for video calls. Oh, and there's no 3G model either.

Shield's 5-inch 720p "retinal quality" display really is a thing of beauty - it's detailed, bright and has a wide viewing angle. It's just a shame there's such a large bezel sitting round the display - such designs have all but been eradicated from most mobile phones. The glossy screen is also particularly susceptible to fingerprints, much more so than most mobile phones or even the PlayStation Vita.

The controller that sits beneath the touchscreen is one of the best we've used, either on a portable console or in the home. It's clearly based around the world-conquering Xbox 360 design, with an identical layout including analogue triggers, a d-pad and two clickable joysticks.

All of these inputs are made from high quality materials and feel very satisfying to use. The control pad can be used to navigate the operating system, but there are Android-specific controls in the centre of the pad. One slight annoyance is the volume control - you need to press a button on the pad, then use the touchscreen to alter the volume level.

The display supports multi-touch control, and it's worth mentioning that you can play any traditional touchscreen Android game using the screen. However, it's unlikely that you'll want to thanks to the awkward positioning of the controller under the screen, making it uncomfortable to use for any length of time.

Shield boasts controller support for around 130 Android games, which isn't much, but it's growing by the day. The recent release of third-party controllers such as the Moga and Green Throttle have resulted in more games supporting console-style controllers, and the imminent arrival of similar devices for iPhone 5 should also have an impact on future games when they're ported to Android.

Shield comes with Sonic 4 Episode II THD and Expendable: Rearmed - both are good technical showcases, but Sonic is the better game.

There are lots of other compatible games catalogued in an Nvidia app for purchase through the Google Play store, including Grand Theft Auto: Vice City, Burn Zombie Burn, Puddle THD and Shadowgun.

If you've bought them previously on Android, you won't have to pay for them again. Playing these games using a controller is a far more satisfying experience than using a touchscreen, making the Shield an attractive device for a serious Android gamer.

Shield's killer feature is undoubtedly the ability to stream PC games from a local computer. The requirements are fairly steep - you need a desktop PC (a laptop won't work) running an Nvidia GeForce GTX 650 graphics card or above, while an 802.11n router is preferable to stream a solid video signal.

You also need to be on the same local network as the computer, the computer needs to be turned on before Shield can connect to it, and you can't do anything else with the computer while it's streaming.

As you can tell, it's pretty restrictive, and the feature is still in beta right now while Nvidia irons out the kinks and addresses some of these issues. For example, the company hopes to update the PC software so that Shield can wake your computer up, and stream from the PC while someone is using the PC for other things, such as web browsing.

From a technical perspective, it's still hugely impressive. If you have all of the equipment detailed above, Shield will play games that look as good as they do on the host PC, which are way beyond anything available on mobile right now.

The only real comparison is streaming service OnLive, but unlike OnLive, Shield doesn't have any lag - it all works completely seamlessly.

There are only 25 supported games right now, but they include big hits such as Crysis 3, Grid 2 and Skyrim, which should keep you going while Nvidia develops the feature out of beta and adds more game support.

If you're looking for a traditional controller for your Android games, a third-party Android device such as the excellent Moga Pro does a lot of what the Nvidia Shield does for a sixth of the price.

Shield is a no-compromise handheld unashamedly aimed squarely at the hardcore gamer - one who likes Android games and has a powerful PC sitting at home. It's a niche audience, for sure, but those who are attracted to such a device will find Shield a luxurious and well-made effort.