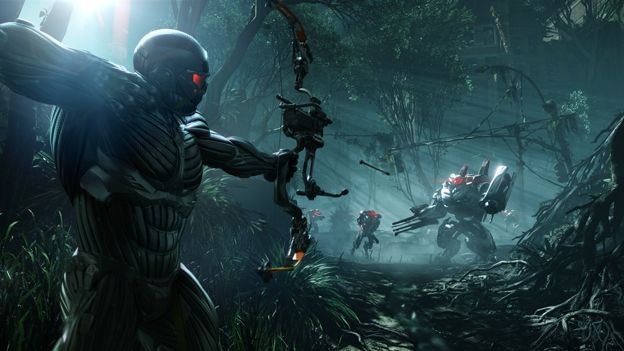 Crytek's third Crysis is certainly the prettiest of them all, but can it compete with FPS stalwarts such as Halo 4 and Call of Duty: Black Ops 2?

3. 2. 1... Go. Instantly my team explodes in different directions like a firework. I'm following one of them, attempting to watch our backs whilst he sprints towards the rattle of assault rifle fire up ahead. This is the same beginning to almost every game of team deathmatch I have ever played.

As I spin to the front, my companion tumbles past me, with an arrow sticking neatly out of his chest. I hit my cloak, praying I was quick enough, and power jump into a nearby tree. Spotting the enemy underneath, all logic and calm leaves my brain. I drop down, spraying him with bullets - a convincing kill. Not bad.

My HUD flashes, and a hexagonal frame appears - my nanosuit's auto-armour. I'm taking hits. I panic, and sprint over to a burnt out car, sliding neatly in behind it..

I stand up, and smash the car across the map. Something glints far away, a cloak, as its owner tries desperately to avoid the rolling metal mass. He jumps, but the car catches him in mid-air, crushing his nanosuit and earning me another kill. I hear the rustle of tall grass behind me, and instinctively hit my cloak again as I spin around.

One more enemy runs right past my nose, close enough for me to briefly admire the lighting effects on his sinewy nanosuit, before punishing his myopia with a knife to his chest. Three kills, this is getting good...

Thunk. My celebrations are cut short by a pinpoint arrow, from well across the map. Killcams are not something I like on the whole but I have to admit, it was an impressive shot.

This was our first 30 seconds of Crysis 3. We doubt we've done it justice but it was pretty intense - as exhilarating a multiplayer experience as any FPS we've ever played. But just as Crysis 3 is capable of moments of absolute brilliance in both single and multiplayer, it struggles to maintain them throughout.

The single player sees you reprise the role of Prophet, now only barely human, and almost completely enveloped by the alien Ceph technology in his nanosuit. It's been 24 years since the events of Crysis 2, and the C.E.L.L. Corporation has turned from semi-friendly cannon fodder to a ruthless, highly trained militia, hell-bent on world domination.

The setting is New York, but not as you know it. C.E.L.L. has made The Big Apple into the so-called 'Liberty Dome' - a giant, overgrown mass of wrecked cars, crumbling buildings and tropical flora. Seeing you as a threat to its power, C.E.L.L. is hunting you, totally unaware of the impending threat of the mysterious 'Alpha Ceph' - an alien so powerful it will destroy the human race.

If that was a bit long-winded for you, here's a summary: Basically, you're superhuman Rambo in a badly neglected version of the Eden Project. And there's a big alien coming to end the world.

How you play Crysis revolves largely around how you decide to use your nanosuit. Hitting the right bumper will activate your cloak, whilst the left bumper will active your armour, allowing you to take more hits. Using either of these functions drains your suit's energy, and you must deactivate for a few seconds to start recharging again.

It's simple stuff, but this mechanic alone adds a bit of tension to proceedings, giving you an unofficial time limit to adhere to.

At easier difficulty levels, it makes little difference how you decide to go about things. You can stay cloaked and sneak through with relative ease, or you can armour up and go in all guns blazing. The choice between stealth and firepower isn't entirely a balanced one though...

The single player campaign is clearly built and sold around the Predator Bow - a high tech bow that - unlike any other ballistic weapon in the game - allows you to stay cloaked whilst taking down enemies. You will be using this bow a lot, which by definition means you will be cloaked a lot.

This is no bad thing, as with great archery comes great satisfaction. Encounter a C.E.L.L. squad and you can pick them apart with Jigaw-esque sadism, thanks to electro, sticky thermite and explosive arrow heads. Sure, the story is insipid nonsense, but if you just ignore it, there's still plenty of fun to be had here.

Lets get one thing straight - Crysis is a PC franchise, it always was and it always will be. The console versions of Crysis 3 are not bad looking, but they can't hold a candle to the jaw-dropping visuals of the PC version.

If there is a nicer looking game on PC at max settings, we haven't seen it. Cry Engine 3 creates a masterpiece world, perfectly suited to Prophet's sneaky snake shenanigans. If you want to know what next-gen looks like, take a look at Crysis 3 on PC and it'll give you a pretty good idea.

In comparison, textures on the Xbox version (and presumably the PS3 version also, though we haven't tested it) are far less detailed, and take a second or so to load in places. The frame rate - though playable - is not quite fast enough for an FPS of this speed and the viewing distance has been pulled back. The result is that textures pop in and out at a certain distance, and objects disappear from view if they're too far away.

Crysis 3 looks no worse than any other game on console, but it's plainly obvious that this generation of hardware just won't be pushed any further. This is a game that is trying to get more out of the Xbox 360 than it is capable of, and it suffers as a result.

The Xbox 360 version still seems to have a few issues with lag - a decent percentage of games we played were a bit jittery, without there being any obvious bad connections among players. That's only a minor quibble though really, the game is still very playable and on the whole, it runs nicely online.

The selection of game modes is excellent, with old favourites like Team Deathmatch running along new, more fashionable modes like Hunter - an infection-esque gametype where the majority play as C.E.L.L. operatives and must survive to the end of the round against Predator Bow-wielding hunters.

If you thought the gentle ping of the motion detector in Aliens: Colonial Marines was scary, wait until you experience the spine-tingling plink of Crysis' proximity alarm, when you're the last man standing, surrounded by cloaked hunters.

The key - as we rapidly found out to our cost - is not to overuse your cloak. You are not invisible, and if you're spotted, you're probably already dead. Clever use of your nanosuit is required, but this is a twitch shooter by nature, and Battlefield 3 tacticians will have to get running and gunning to find some online success.

As has always been the case with the Crysis franchise, a significant part of the enjoyment is in the incredible visuals. The Liberty Dome is a stunning world, full of vibrancy and verticality - the perfect shooter sandbox. But only the PC version does it justice, and the console version really suffers from an inability to match up.

We're left in a slight quandry by the gulf between the PC and console versions of the game. The PC version earns a solid 4 out of 5, thanks to incredible visuals and solid online play. On the grounds that the console version struggles mightily to reproduce both these things, we'd have to downgrade it to 3 out of 5.

If you can look past the issues, there's a solid, enjoyable and at times, spectacular shooter underneath. Halo 4 this is not, but FPS fans will find reasons to love Crysis 3 despite it's flaws.