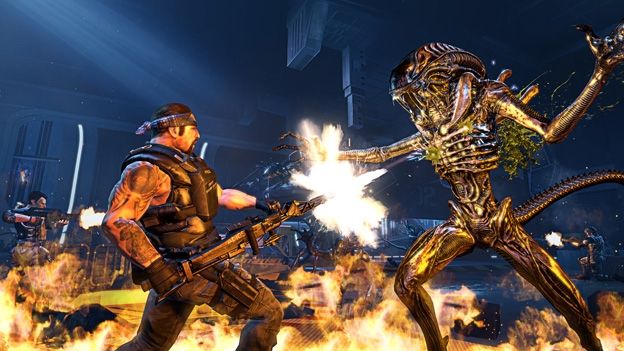 Aliens Colonial Marines is a shooter set in the universe of James Cameron's Aliens, which comes on like a cross between Quake and Dead Space

Alien: Colonial Marines is being billed as the sequel to James Cameron's seminal 1986 film Aliens, and to be honest, that's more weight than this game can shoulder. Aliens isn't just one of the best horror films ever made, it's an iconic cultural touchstone and one of the only sequels to ever improve on its (already brilliant) source material.

Alien Colonial Marine can't – and doesn't – live up to that legacy. However, once you remove the millstone of cinematic history from its neck and attempt to take it for what it is – a consistently fun FPS in which you get to blast HR Geiger's nightmarish brainchildren – you might find yourself addicted to it.

The single-player campaign puts players in the boots of a Colonial Marine – OOORAH!! – called Winter who is part of a team dispatched to find out what happened to the Marines aboard the Sulaco (the ship in Aliens).

Once aboard, Winter and his fellow soldiers find the Sulaco has been overrun by xenomorphs and, after grabbing the flight recorder, they wisely decide to get the hell out of there.

Because nothing is that easy in the Aliens universe, they soon find their escape route cut off and themselves trapped aboard the Sulaco with a lot of murderous aliens closing in on them.

That may sound like a pretty thin premise, but the story of Alien Colonial Marines is one of the best things about the game. As Winter as his mates try to survive against the alien onslaught, they start to uncover some shady practices involving their dead comrades, the xenomorphs and a corporation called Weyland Yutani.

As if on cue, corporate troops enter the fray, intent on putting bullets through the Marines, to make sure none of the information they've discovered ever leaves the Sulaco. The action continues at a clip, with the player descending to the planet LV-426 and the colony of Hadley's Hope.

The plot is populated with some pretty interesting characters, who are both deeper and more complex than the usual military types who populate shooters these days.

Naturally the campaign gives players plenty of opportunities to shoot guns at snarling aliens and over the eight hour campaign they'll get their hands on some of the iconic hardware from Cameron's movie.

The pulse rifle, with its rapid fire bursts and under-barrel grenade launcher is the game's standard issue firearm, but players will get hold of flamethrowers, shotguns and – arguably the best weapon in the game – the smartgun, which allows them to target and obliterate multiple targets with using a reticule.

All of the weapons look and sound like their counterparts in the James Cameron movie and all of them are an absolute blast to use – as is the iconic motion sensor, which beeps urgently whenever enemies are near.

Players earn XP for every kill they make and every collectible they find – in the form of dogtags, audio diaries and legendary weapons. All of this feeds back into the profile they'll be able to take into the multiplayer mode and gifts them points they can use to unlock augmentations for their weapons.

These include firebombs for the pulse rifle, laser sights for the shotgun and reduced kickback on machine pistols.

Once they've blitzed the campaign, players will probably want to head into the multiplayer and it's here that the game offers a match of two halves. When battling online, odds are heavily tipped towards those players who can be bothered to work as a team.

Whether they play as the aliens or the marines, players will find that, unless they work together, they'll be wiped out in short order. Lone wolves need not apply; in all likelihood they'll annoy the hell out of their team-mates and be picked off easily by their adversaries.

The online mode has team vs team and objective based match types. Playing as the marines usually involves staying in a tight-knit group, watching each other's backs and keeping an eye on the motion sensor.

Playing as the aliens is a little more liberating; the HUD is in infrared so you have the drop on your human adversaries, which gives you a bit more leeway in how you approach for the kill.

Both sides have special weapons situated somewhere on the map; aliens have husks such as the exploding Boiler or the massive Crusher they can control, while marines can grab a smartgun or flamethrower if they're prepared to brave the dark.

There's a lot to admire about Aliens Colonial Marines, which is good because there are one or two glaring drawbacks to the proceedings. For a start, the graphics could have been given a polish; on PC the environments and character only dip in quality if the player zooms in close, but on Xbox 360 they approach a standard that could be described as 'dire'.

Furthermore some of the alien animations are unintentionally hilarious; on all fours they look suitably menacing but when they attack on two legs, they look like they're approaching with jazz hands outstretched.

Aliens Colonial Marines may be a little too rough around the edges for a lot of players. Its graphics are patchy, its gameplay straightforward and overall it doesn't feel like a big budget sequel to one of the greatest horror films ever made.

But Aliens Colonial Marines remains fun and consistently engaging throughout. Just be aware, there are some kinks going in and temper your expectations accordingly.