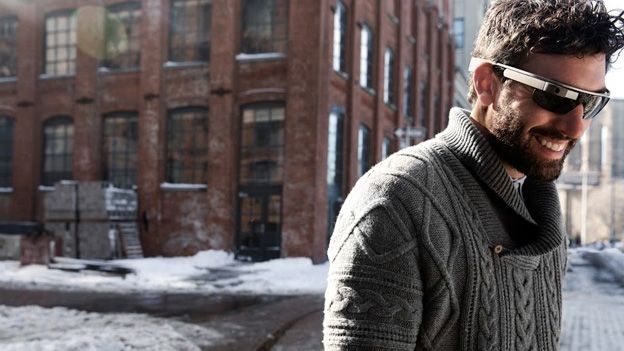 The Google Glass wearable computer is finally available to selected developers - but can it takes on Apple's rumoured iWatch?

Google Glass is the first wearable computer to hit the streets, and, if rumours are to be believed, will battle the Apple iWatch when it finally goes on sale to the public next year.

The first, and ultimately most important thing you need to know about Google Glass is that yes, you'll look an idiot. Not just a bit daft, but full-on people giving you pitying looks in the street silly. That aside, and it is without doubt Glass's biggest issue, the technological side of Glass is fascinating.

Putting it on for the first time is an odd experience. It's really light at 42g, and feels light on your face - much more so than many badly fitted pairs of glasses, in fact.

The build quality of Glass is superb, and while the screen is obviously fragile, we managed to drop the unit a couple of times with no damage, and the adjustable frame bends (a surprising amount) to fit almost any face shape.

Different sized nosepads are supplied along with a sun shield (just in case you want to look even more absurd) and a carrying case.

There's no disguising the fact you're wearing Glass, but aesthetically it could have looked a lot worse (as pictures of earlier prototypes show).

The battery is behind the ear to balance the device - which feels incredibly light when being worn. You can just about get a full day's use out of the battery, assuming you don't record too many videos or take part in Google hangouts.

Once it's on, you simply swivel the tiny prism that projects the screen into view, and hey presto, you're a glasshole (as wearers have cruelly been dubbed in San Francisco).

The display 'hovers' in the top right of your vision, and at first feels very, very strange and intrusive. However, after a few hours, that subsides, and we found that we forgot we were wearing it a lot of the time (unless you question why people are looking at you strangely, anyway).

The design means that when the screen is off, you can see through it and act and see like a normal, non-cyborg. The high resolution display is the equivalent of a 25-inch high definition screen from eight feet away.

The touch-sensitive frame, on the right of the glass, is very simple to use and responsive, with left to right scrolling, tapping to move down a menu layer and swiping down to move up.

The menu system is a series of cards, which you scroll through. Some of the cards have folded edges, which means they contain more information - for instance, clicking on an email lets you see past conversations.

It works reasonably well, but if you subscribe to several apps and are getting email, news headlines and updates from social network Path, for instance, it can all become a little laboured scrolling through.

The first thing you'll do with Glass is, without doubt, take a picture. The 5MP unit is good, but not great - although Google has already improved it dramatically in its monthly software updates. It's also capable of recording 720p video.

The bone conduction speaker means you get 'private' audio, and it works well, although it does give you an odd buzzing sensation at times. The microphone also works well, even when you're about and about - but can be humiliating if you need to shout 'ok, glass'

Glass also features a Micro USB Connector - used for charging the device, with a full charge taking only about an hour.

The headset also packs Wi-Fi (802.11b/g) and Bluetooth connectivity along with 12 GB of usable memory, synced with Google cloud storage.

The current apps are very limited, and are really little more than a proof of concept for the technology, but that is set to change quickly
now developers have them.

Most of the apps available are Google's own, with email and text support, along with Google's search and Google+ and Google Hangouts. There are also Twitter, Path, New York Times, CNN, Evernote and Tumblr apps, although all are very basic, but do allow you to easily share information.

Unsurprisingly, you'll need an Android phone to get the most out of Glass, and setup is easy - just download the MyGlass app, and tell it what your Wi-Fi network is and what apps you want to use from a (currently very small) list.

There's a lot of debate over whether using Glass in a car will be safe, but directions show Glass at its best, with unobtrusive information that's just there when you need it. There are driving, walking and cycling directions built in.

Google Now is the key to Glass from Google's point of view, Now integration brings information you've searched for elsewhere to Glass - for instance, look up a restaurant on your PC before you leave, and it'll be in Glass as you leave, complete with traffic delays and the option to get directions.

Seeing texts pop up is a bit of a shock at first, but soon becomes incredibly useful, particularly as Google's speech recognition is so good.

Unsurprisingly, the integration of Google's search engine is superb, with voice recognition and smart handling of results, which can show you weather forecasts, directions or standard Google results- although at the moment you can't actually go and visit sites.

Leaving the house for the first time is the biggest leap of faith, and it's slightly terrifying watching people clock you wearing Glass. Perhaps it's the British reserve coming into play, but it really is rather embarrassing, even on the streets of San Francisco - and that
feeling doesn't go away after a few days.

However, what does change is how useful they become. The key to Glass is that it's always there, ready to go - and always keeping you up to date. Playing with it around the house is all well and good, but its after you wear it around for a day it actually starts becoming useful.

Walking directions are superb, and incredibly well implemented, and taking video and pictures is very neatly implemented - just tap the touchpad or lift your head to wake up Glass, and say 'take a picture'.

However, it's the alerts that really began to grow on us in a way we weren't expecting after a few days. Getting your email or a tweet mentioning you popping up becomes part of life, and being able to reply by voice instantly really means you're never out of touch, and means you communicate in an entirely new, and fascinating way.

There are obvious privacy concerns, and in Europe these are yet to be addressed, and people do seem to be uncomfortable when they realise you're wearing Glass. However, many people, ourselves included, believe the usefulness (or potential usefulness, at least) does outweigh the issues. Besides, Google Glass doesn't really infringe on privacy more than the average smartphone.

One of the slightly annoying things about the design, however, is that you really do have to wear Glass all the time if you decide to go out with it - there's no way to fold it up and store it. There is a carrying bag which protects it, but it's not small.

In terms of rival products, Glass really is the trailblazer in the wearables market, and while there are a few adventure sports goggles
that offer augmented reality displays, there really is no competition for Glass at the moment.

Google stresses that Glass is still an early version, and the consumer hardware and software that goes on sale next year will, and should, be very different to the 'Explorer Edition' available to developers today.

It also plans to update the software every month, so by the time it goes on sale to the public in 2014, it may have changed radically. We also don't know how much Glass will cost, with analysts estimating £500-700. At this price, given the current features at least, it simply isn't worth it for the average consumer, although if Google were to surprise the industry and sell Glass for £300, it could have an instant hit.

The overwhelming feeling is that the first version at least is likely to fail as an expensive novelty that makes you look stupid,
particularly given the privacy worries.

But having worn Glass for just a few days, there is something wonderful about this technology as well. If Google can make it as unobtrusive as possible (and there are researchers around the globe working on contact lenses that could replace the headset), and make the software simpler and more useful, then this really could be the next big thing in technology - we just aren't there yet.

Google Glass is very much an early version, and as such has a few problems, and does crash now and again. However, its core functions, such as directions, speech recognition and camera work extremely well. You're crippled by the small selection of apps currently available, but by the time it goes on sale to the public in 2014, that will almost certainly have changed.

Once the full consumer version is out (along with a broader range of apps), we'll take another look and re-assess the product.

For now, it's safe to say that Google Glass is a unique, and potentially great, product at a very early stage of development- but for now, it really is only for developers, and it will make you look a glasshole.

Not star rated as consumer product still in development.