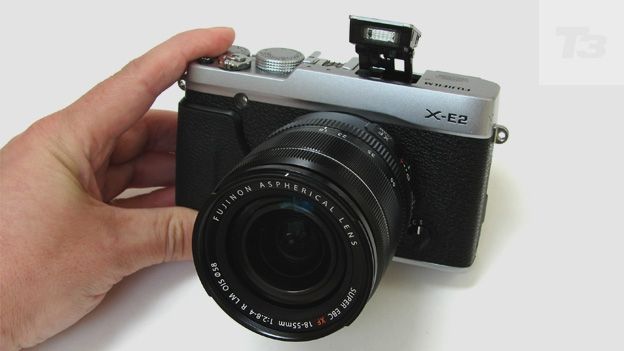 It packs a retro design, Wi-Fi and a high-res viewfinder, but does this snapper deliver on quality? Find out in our Fujifilm X-E2 review

In succeeding the Fujifilm X-E1 with a few performance tweaks, the new 16.3-megapixel Fujifilm X-E2 comes across like a Fujifilm X-A1 on steroids, minus that cheaper model's tilting touch screen.

Instead we get a chunkier, slightly more robust construction, plus the addition of a eye-level viewfinder with a whopping 2.36 million-dot resolution in addition to a 3-inch LCD.

Shared features between the X-E2 and X-A1 include Wi-Fi connectivity and 1,920 x 1,080-pixels Full HD video, albeit the X-E2 offers a swift maximum capture rate of 60fps (as opposed to the standard 30fps).

The X-E2 is being offered at an asking price of £1,149 bundled with 18-55mm standard zoom lens, which isn't far off a body-only X-T1, a marginally newer premium Fuji 'X' series model, which is currently £1,099 without any lens.

The Fujifilm X-T1 feels a bit closer to a DSLR in terms of looks and handling, while being more compact than an actual DSLR. This X-E2, on the other hand, appears more classically rangefinder-like. We might also consider the X-E2 a more affordable alternative to a Leica M type camera, or the same manufacturer's newest Leica T series CSC.

Like both the alternative Fuji models mentioned just above, the X-E2 possesses a 16 megapixel APS-C sensor, being a physical size match for those chips found in consumer digital SLRs.

Theoretically this makes for image results closer to what we'd expect from a DSLR, even without a lens as large as a DSLR's attached (except via a third party adapter).

This model is very much one for the enthusiast who will want as much detail in their photographs as possible. A case in point: Fuji has removed the X-E2's optical low pass filter, which usually prevents image artefacts such as tightly packed stripes on a shirt or blouse seemingly vibrating before the eyes, but which causes a loss of overall detail as a result.

Here generating a big performance despite the camera's relatively compact dimensions is the clear aim. That being the case you might want to augment the standard zoom supplied with an additional prime lens, such as a 60mm, to really get the most out of this camera and its large sensor.

The solidly built X-E2 offers rangefinder-like controls on its top plate in the same location as the junior model in the X-A1, but here the dials serve different purposes.

One is marked with shutter speeds of up to 1/4000th of a second, and the other places exposure compensation settings of +/- 3EV at our fingertips. Between these two wheels, as on the X-A1, sits a raised shutter release button ergonomically encircled by an on/off switch for easy access.

There's not much of an actual handgrip provided on the X-E2, undoubtedly in order to minimise what is already a fairly broad depth for a compact system camera.

But the weight with lens attached, along with leather effect padding to the front and back plates, meant that it didn't at any point feel as though it would slip from our grasp.

The length of the lens means that we automatically ended up with our right hand gripping the camera and left hand slipped around the optic for a steady two-handed approach.

Rangefinder camera-type wheels on the top plate aside, the function buttons at the back fall between what we'd expect to find on a regular compact digital camera, and those more usually found on a digital SLR.

Thus we have dedicated controls for locking exposure and focus, alongside a drive mode button to the left of the LCD. The latter button is provided in lieu of an actual shooting mode wheel found on more consumer-orientated cameras.

No fewer than four buttons can also be customised by the user to provide swift access to favoured settings, and we're provided with a vacant hotshoe for the attachment of optional accessories - including a flashgun - alongside a built-in pop up flash, which acts as an able back up in any low-light emergency.

Alternatively ISO speeds of up to ISO25600 are selectable if you to eschew any artificial illumination and make the most of natural light.

The large 3-inch, high 1.04 million-dot resolution Fujifilm X-E2's LCD screen is fixed, so cannot be tilted. But it makes up for this lack of flexibility, to an extent, by additionally providing that smaller eye-level OLED electronic viewfinder above.

This offers an amazingly high resolution of almost 1.4 million dots - matching the X-T1 model for specification - but also features an eye sensor. Thus, when we wanted to use it, activation was automatic, without the need for additional button presses, making for fluid and intuitive operation.

Like the high-end X-T1 and budget priced X-A1, the X-E2 matches its siblings' power performance in offering around 350 shots from a full charge of its NP-W126 lithium-ion battery, which is overall just slightly better than average for this class of camera. It falls short of the performance you might expect of a DSLR with a price tag similarly around £1,000, but a small-ish camera inevitably means a smaller battery.

When it comes to the look and feel of its pictures, there are eight digital filter effects on board the X-E2 in addition to the Fuji's regular Film Simulation modes, which ape its 35mm Velvia, Astia and Provia films and help provide a point of difference between this model and its rivals.

But in truth we didn't find ourselves using them much because the unadulterated images delivered by the X-E2 are simply a knock out, the zoom offering the ability to frame a variety of subjects from a standing point, as well as achieve some nicely DSLR-like defocused backgrounds and sharp foregrounds to really draw the eye.

It's not quite as easy to get at shooting video with the X-E2 as the cheaper X-A1, which has the advantage of a dedicated button for one-touch recording. Here, once the right drive mode has been selected, the camera is capable of capturing the Full HD, stereo microphones mounted above the lens and just forward of the vacant hotshoe. Marry all the above to a large APS-C format sensor and it's hard to imagine a performance from a compact system camera being much better.

An elegant-looking camera offering a great performance: what's not to like? OK, so we don't get the flexibility of a tilting LCD screen, but the integral eye-level viewfinder will satisfy traditionalists looking for a portable digital workhorse with a build quality that at one time we'd have only expected from the more expensive enthusiasts' favourite of Leica.

Whether these attributes are worth spending £500 more than the great value X-A1, which features the same size, same resolution sensor is, however, open to debate and will come down largely to personal preference.

There is currently some sugar to sweeten the pill. At the time of writing - and until the end of May 2014 - Fujifilm is offering a free compact prime lens when buying a X-E2 body, or an additional 55-200mm lens free when purchasing the X-E2 plus 18-55mm zoom we reviewed here.

Since some of the lenses available in the deal are worth £500+, if you intend to invest in the Fuji X system, there has arguably never been a better time to jump in.