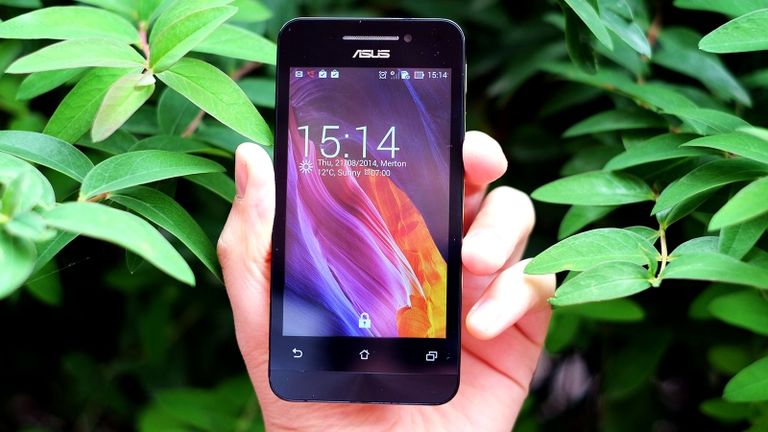 Asus has finally made a phone for the masses in the Asus Zenfone 4. But is it ready for the spotlight? Read our Asus Zenfone 4 review

Don't want to spend hundreds on a phone? Asus wants a word with you. The Asus Zenfone 4 is an Android phone that sells for a pound under £100 without any sort of contract, making it an obvious pick for the SIM-only crowd of phone buyers.

This is Asus's first phone really aimed at the average phone buyer cruising the high street for a new mobile. It has made a few phones before, like the Padfone hybrid, but they've all been a bit weird and quirky. They were all about geek appeal.

The Asus Zenfone 4 goes head-to-head with super-successful phones like the Motorola Moto G and Sony Xperia E1 and is out to establish Asus as a real phone brand. There are some real improvements to be made, but it's not bad for a first effort.

The Asus Zenfone 4 is about as small as phones get these days. With a 4-inch screen, even kids should be able to get their hands around this phone easily enough. Like the iPhone 5C, smaller size makes this phone dead accessible. And unlike an iPhone, the price is pretty approachable here too.

You can get the Asus Zenfone 4 in a few different colours, including a greenish-blue, red and yellow, giving that bit of personality missing from some cheaper phones. Of course, there's plenty of competition if colour is what you're after. The Nokia Lumia 630 is just as bright.

The back of the Zenfone 4 is made of plastic, and the front is covered with hardy Gorilla Glass 3 according to Asus. This means you'll be able to put it in your pocket without worrying about it getting too scratched.

However, we still found it very easy to distort the screen with a bit of thumb pressure, making us wonder whether the toughened glass might actually bit a bit too thin here. It's so easy to flex you can actually hear the air whooshing out the microphone hole at the bottom when you give the screen a squeeze. A bit worrying.

For a bit more of that Asus flavour, the bottom 'lip' of the Zenfone 4 is a bit shiny, featuring a design of concentric circles. However, you're not going to mistake this for a phone that costs hundreds. It's a cheery-looking and easy-to-use phone, but still a fairly basic one.

The Zenfone 4 naturally has some feature gaps as a £100 phone. You don't get super-fast 4G mobile internet, just 3G, and things like NFC are absent. Anything too flashy generally gets left out of cheaper phones like this. However, there are a few 4G phones at the price these days, like the EE Kestrel.

So what do you get? Asus has packed 8GB of internal storage into the Zenfone 4, and there's a microSD slot under the hood to let you add more memory.

Other than that, you just get the basics – Bluetooth, Wi-Fi and GPS.

The Asus Zenfone 4 has a – by current standards – small screen. It's a 4-inch display whose resolution of 480 x 800 pixels is also pretty low. However, as the screen is so small, you still get a reasonable 233ppi.

It's not particularly blocky, just a bit soft-looking. However, it's not an IPS screen either. This is the kind of display used in most phones, and brings better viewing angles to the table than a 'standard' LCD screen, which is what the Zenfone 4 has.

Contrast shift kicks in when you turn the phone in certain directions, and it ensures that the screen experience isn't as great as it is in, say, the Motorola Moto E. And that phone's a good £20 cheaper.

Colours are decent, though, and you get control over the saturation levels too.

Fair decent, so-so screen. But how's the camera? It's a real cut above, at least in terms of software. The Asus Zenfone 4 gives you the kinds of modes you normally only get in much more expensive phones, like the fake depth of field mode seen in the HTC One M8 and others.

There's loads of stuff to play with. Granted, not all of it works tremendously well, and a lot of it is a little bit buggy. But it is fun to play with, and fingers crossed a software fix will sort out some of the glitchy bits.

Image quality of the Zenfone 4 is a mixed bag. The 5-megapixel camera has a pretty sharp lens, giving about as much detail as you could hope for from such a low-res phone camera. However, it struggles with colour reproduction. Colours tend to look a bit uneven and unnatural, with some shades overdone while others are barely baked.

The Asus Zenfone 4 camera belongs in the 'for casual use only' box, but then so do most budget phones. We think Nokia's low-end Windows phones like the Nokia Lumia 630 produce more natural-looking shots, though.

There's no flash to help out in low-light conditions, but you do get 1080p video capture, which is often not available in entry-level phones. As well as the rear camera, there's a VGA front one for video chats. The selfie mode lets you take selfie shots with either camera, though.

The Asus Zenfone 4 uses a custom interface made by Asus, called the ZenUI. This sits on top of Android 4.3, a somewhat-old version of the Google OS. We're on 4.4 now, and Android L is on the way. However, the right UI can generally paper over the differences a bit.

ZenUI is a bit fiddly and adds extra elements at the expense of simplicity, but among custom interfaces (of which there are some stinkers), it's fairly good. It doesn't mess with the layout of Android too much, just adds some over-embellished bits.

Actual performance is pretty good too. Despite being a bit overblown in parts, the ZenUI doesn't really slow the Asus Zenfone 4 down. General speed is good.

It's an Intel Atom Z2520 that runs the show. This is a dual-core 1.6GHz processor that, while an entry-level chipset, has enough grunt to make Android fun to use. We did notice some clear frame drops in high-end 3D games, though, where rivals like the Moto G get by without much slow-down at more-or-less the same price.

Where the Asus Zenfone 4 is really shown up, though, is battery life. The phone has a 1600mAh battery and its stamina is really very poor. With normal use: screen brightness at around 60 percent and just the odd bit of browsing, you'll be very lucky to make it through the day.

Asus's inexperience is really showing here, as this sort of performance isn't really acceptable anymore. To get through the day you'll need to use the Ultra Power Saver mode. This turns off background data, cutting down on how smart your smartphones seems in use.

Oddly enough, some territories have a version of the Asus Zenfone 4 with an even smaller 1200mAh battery. The poor things.

The Asus Zenfone 4 is a sound first try at a phone for the masses. However, there are just a few too many problems for it to be a really great alternative to the several great £100 phones out there.

It's not really a case of missing features, much as we'd like to see 4G in the Zenfone 4. It's more that the poor battery life and uninspiring screen mean the phone doesn't really stack up against either the Motorola Moto G, or the cheaper Moto E.