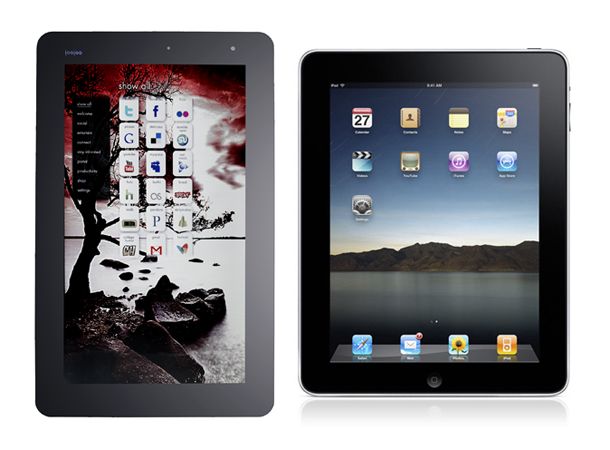 It's Linux Vs Apple, as we pit the joojoo tablet against the iPad. Which is the tablet king?

Call it foolhardy, daring or a timely way to capitalise on the tablet phenomena, but joojoo lauched in the UK, within weeks of the iPad. Despite fundamental difference in terms of build and interface, both are part of the new breed of tablets, moving away from the Windows-based shrunken PC of old to a touch-driven browsing experience, with a gorgeous high-res screen. But which is best? Will the joojoo live up to its magic-infused name, or will the Apple triumph?

Design and build
Apple iPad: Weighing 680g (WiFi) and 730g (3G), it's most comfortable to use with two hands, although you can hold it in one hand and type with the other for short periods of time.
joojoo: At 1.1kg the joojoo is clearly designed to be used with two hands, but measuring 324mm it's a little large to sit comfortably in your lap as you watch TV. We also found it a bit big to carry comfortable in a laptop or shoulder bag.
Winner: Apple iPad

Operating system
Apple iPad: The 'it's just a large iPod Touch' comments are partially correct; it shares the same intuitive interface as the Touch and iPhone 3GS. Apps and shortcuts are stored over unlimited screens, and you can download directly or via iTunes.
joojoo: Linux-based OS with three home screens, none of which you can customize at present. No apps, but the homepage has a wide selection of internet shortcuts including Twitter and BBC News. Even if you don't live in the US you're stuck with US-centric apps, like Walmart and Hula.
Winner: Apple iPad

Touchscreen
Apple iPad: Multitouch is incredibly fluid and responsive especially when browsing. Drag the page up and down, pinch to zoom, double tap to resize text, go back or change the URL via the static toolbar.
joojoo: Supporting multitouch use two fingers to scroll up and down web pages, pinch and zoom doesn't work for web pages. Touch controls lack the responsiveness of the iPad.
Winner: Apple iPad

Controls
Apple iPad: Hitting the bottom button returns you to the main menu and there are dedicated volume controls on the side.
joojoo: Touch the top of the screen and the toolbar drops into view, with controls, including: back, volume and menu, ready for you to press. Unfortunately it's unreliable - sometimes a quick tap will suffice, on other occasions it takes several jabs to display the menu bar. If the joojoo tablet gets a second outing, dedicated buttons are essential.
Winner: Apple iPad

Video playback
Apple iPad: With a 1024x768 resolution, the 9.7inch screen is bright and sharp. You Tube videos are smooth, with punchy colours. We had no issues streaming an HD episode of Dr Who over WiFi.
joojoo: At 12.1inches, the screen is more generous, but this is proof a larger screen does not mean a better image. Standard def You Tube videos look fine, although colours lack punch next to the iPad. Despite an ION Graphics processor and Flash, we struggled to stream the same Dr Who episode from BBC HD at Full HD without juddering, a problem we've encountered with netbooks running the same processor.
Winner: Apple iPad

Storage
Apple iPad: Choose from 16GB, 32GB or 64GB capacities, no card slot though.
joojoo: There's no card slot either, just a 4GB solid state drive. However as joojoo is a pure web device, you don't really need lots of storage. A future update will enable the joojoo to support USB devices for additional storage.
Winner: Draw

Apple iPad: The Apple iPad has custom designed a 1GHz chip and despite being less powerful, the responsive touchscreen make the iPad far quicker to use. T3.com loads in between 7-10 seconds over WiFi, slightly quicker, because there's no Flash video to load.
joojoo: You get a Intel Atom 1.6Ghz processor and BBC News and Yahoo load in a quick two and five seconds respectively. T3.com takes a slower 10-12 seconds, but that's with elements like Flash video. Unfortunately, that's spoilt by the sluggish touchscreen, which makes the joojoo far slower to use.
Winner: Apple iPad

Connectivity
Apple iPad: You get Apple's proprietary jack, WiFi b/g/n, A-GPS, Bluetooth 2.1 and 3G (if you're willing to pay an extra £100). A 3.5mm jack is standard.
joojoo: There's no Bluetooth, but WiFi b/g/n, a 3.5mm jack and USB, unfortunately this is for charging and adding a mouse, not for transferring music or movies. No 3G as yet.
Winner: Apple iPad

Battery
Apple iPad: Apple iPad promises 10 hours of WiFi and it'll easily last a day.
joojoo: Quoting five hours over WiFi, after two hours of use, with a lot of browsing, the battery dropped to 39%, so you're looking at about half a days use.
Winner: Apple iPad

T3 Verdict
Apple iPad: The intuitive UI and effective multitouch controls make the iPad a joy to use. Throw in the apps and extras like e-reader and music player and you have a superlative browsing experience everyone should try.
joojoo: The sluggish touchscreen and lack of dedicated buttons make the joojoo tablet a pain to use and it needs far more customization options. Ultimately a good idea, which needs a lot more work.
T3 overall winner: Apple iPad