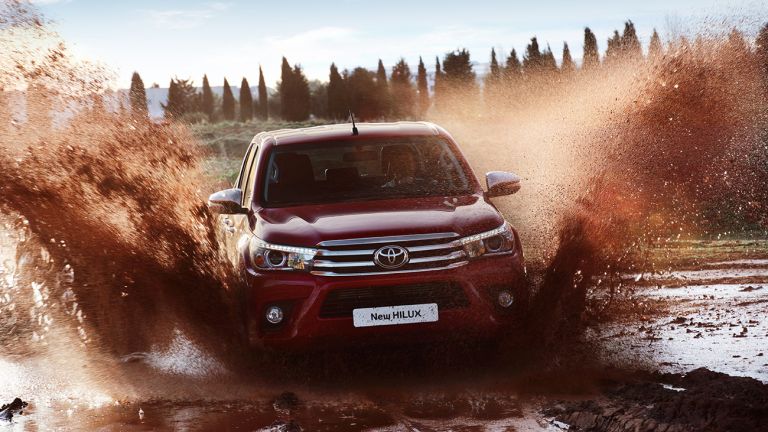 We drive a lot of sleek, luxury cars here at T3, whether it's the Jaguar F-Type SVR or Tesla Model S, there's always something on our driveway making our neighbors jealous. But sometimes we like to rough it as well, put on a flannel shirt, chew tobacco, drive a truck and pretend we're real men. So we jumped at the opportunity to drive the new 2016 Toyota Hilux.

The Hilux is known for being indestructible - you may remember the Top Gear feature in which they literally dropped a building on one, only to have it drive from the rubble like a phoenix from the ashes.

Does the 2016 model follow on in that tradition? Well, Toyota didn't let us drop a building on it to find out, but it certainly felt pretty tough when I kicked the tyres and prodded the metal panels.

Toyota claims it's “Tougher, stronger and more capable off-road than ever before,” so you'll have the take their word for it.

Perhaps the most important thing about a pick up is how much it can carry. The new Hilux is larger than the outgoing model, with the load bay around 1,525 mm longer and 130 mm wider. That's larger than a Nissan Navara and Mitsubishi L200.

The Hilux comes with a new 2.4-litre diesel engine with start/stop technology. This has increased the torque at low speeds, and improved the fuel economy.

We tried both the manual and automatic. Toyota claims both transmissions have been revised to offer more refined experience. Now, don't expect super-slick gear changes similar to a 9-speed German saloon, because it's certainly not the last word in smoothness, but we found it easy enough to drive.

Off-road is where this car really shines. The Hilux features a new ladder-frame chassis which increases torsional rigidity by 20-percent, and still runs on tough leaf spring suspension so it'll glide over bumps.

This makes it handle really well, we were pleasantly surprised by how comfortable the ride quality was around the E.J Churchill Estate.

The car is equipped with a selectable all-wheel drive system (featuring a high and low-ratio transfer case), as well as both front and rear locking limited-slip differentials. This kit makes it a very capable SUV substitute. We took it around some pretty extreme obstacles, steep muddy slopes and through a river - the car didn't bat an eyelid.

In addition to the exterior, the inside has also been given a major refresh. It's now more sophisticated, and similar to Toyota's consumer vehicles.

Build quality feels pretty good, with mostly black trim which should be hard wearing, which is just what you want for a vehicle like this.

We had great fun in the Toyota Hilux - it's hard not to. It's great off-road, and we were surprised by the levels of refinement inside (for a commercial vehicle).

Obviously, it's not perfect, we'd have liked a larger, faster engine (just for the fun factor) and the auto box is a bit clunky.

But after driving a pickup truck for the day we can definitely see the appeal, and have been checking out the classifieds ever since.