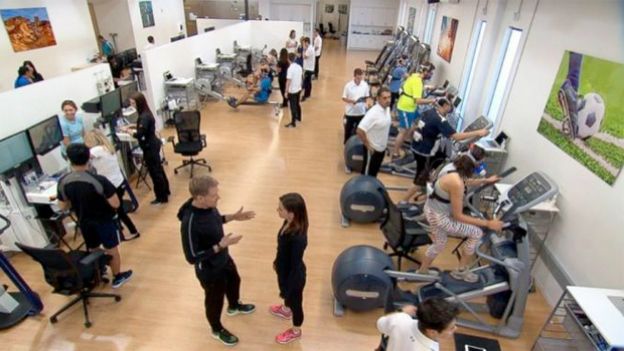 Apple has given a rare sneak peak of its top secret Apple Watch health and fitness lab, ahead of the wearable's April 24 release date.

Apple has garnered a reputation in the tech world for keeping its developments under strict lock-and-key, however it's just broke its cover to flaunt its hi-tech Apple Watch lab.

ABC News was granted exclusive access to Apple's state-of-the-art health and fitness suite, which has been used to hone the fitness tracking tech inside its debut wearable.

Instead of getting a bunch of athletes to sweat it out, Apple got its engineers, developers and other employees to hit the gym to see how the Watch monitors their vitals.

For the past year or so, Apple staff have routinely been hooked up with various sensors as they practice yoga, rowing, running, lifting and more.

Apple being Apple though, they didn't mention to their Guinea pigs what product they were actually testing.

Apple's senior VP of operations Jeff Williams told the network: “[The employees] knew they were testing something, but they didn't know it was for the Apple Watch.

“We hooked them up with all the masks and so forth, but we would put on an Apple Watch covered up.”

The whole point of the fitness suite is so Apple can get a better understanding of the number of calories we actually burn when exercising.

“I think we've amassed already what may be one of the world's largest pieces of data on fitness,” Apple's resident Health guru and former Nike employee Jay Blahnik said.

“Our view is, we're just beginning. We think there's a lot to this fitness thing...the impact on health could be profound.”

The Apple Watch will go on sale on April 24, with pre-orders beginning April 10.