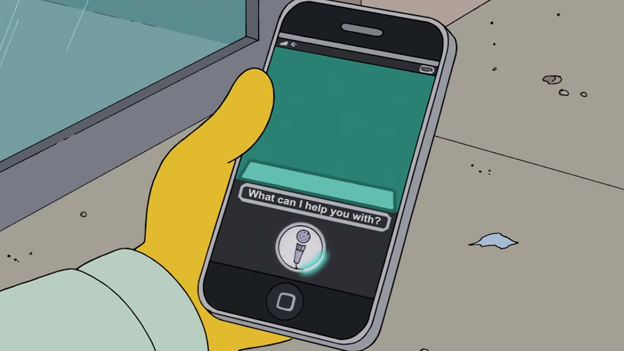 Upon arriving, Homer finds it has closed and will soon become an Apple store. Frustrated, Homer throws his bowling ball at the shops' windows, only for it to bounce back and hit him in the face.

Seeing Homer hurt himself, a nearby store owner comes over to help asking Siri for a list of nearby hospitals. However, it fails to hear him and responds that it doesn't see any “hos petals” and that it is deleting all his contact information.

The owner shouts “I didn't ask you to do that Siri”. However Siri responds “delete confirmed”.

Siri is infamous for misinterpreting what people are saying, especially those with heavy accents. The latest version of iOS has also been at the centre of a number of complaints, and the new iPhone has also had a its fair share of issues.

Still, it is a sign of how much Siri has become a part of the public conscience when you are the butt of a job in The Simpsons.