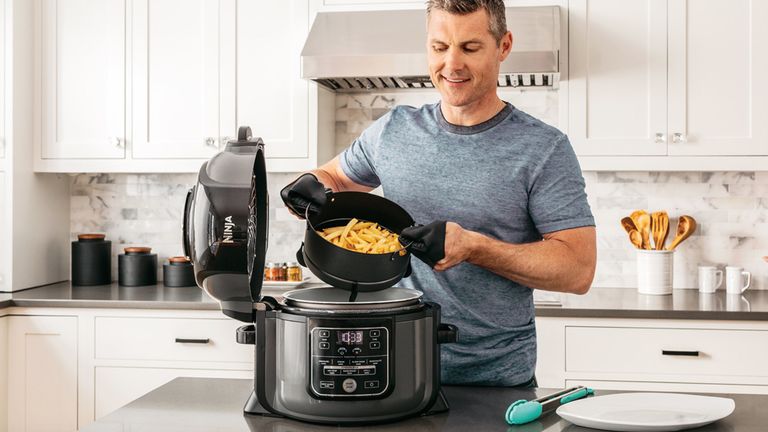 The new Ninja Foodi is a 1,400 watt pressure cooker and steamer that can air fry food too. That’s good news if you’re trying to eat better, because air frying means you can still tuck in to helpings of French fries, but they get cooked without being slathered in gallons of oil. Air frying is also a great way of doing fried rice too if potatoes are off the menu in your household. Now as good as an Instant Pot might be, it can't airfry for shit. So this Ninja Foodi is better.

Lots of kitchen gadgets claim to cut down on preparation and cook all sorts of dishes, with Instant Pot in particular being almost a religion to its many fans.

• And then there's the Thermomix TM6 – meet your new Kitchen God

Pressure cookers and slow cookers have long been great for this sort of scenario. Basically, bung all of your ingredients in and leave it to its own devices. Wait a bit, and voila! You can sit down and tuck in to a delicious dinner. Ninja Foodi, however, takes this to the next level by adding air frying too.

And that’s what makes the Ninja Foodi good but even more versatile, because it’s great for one pot meals, meaning you can cook mains and side dishes all at the same time. It’s also brilliant for slow cooking, which means you can prepare succulent meals hours in advance and allow them to get better over time. Think casseroles and risottos for example. The 6 litre capacity is very generous, which means you can get a whole chicken inside and still have room for some veg too.

Adding more appeal into the mix is the way the Ninja Foodi functions as a more standard pressure cooker, but on top of that it can bake and roast dishes. And, for the ultimate in good healthy eating then the way it steams food like fish and vegetables will make it a hit with anyone counting every calorie.

We’re also pretty keen on the way this beauty can crisp things up, thanks to a variety of settings that mean you can wave goodbye to flaccid, soggy food. Your lunch and dinner will look way more appetising, while getting it ready should take a lot less time by the sound of it. Its makers reckon the Ninja Foodie can cook dishes up to 70% faster than traditional methods.

And, going back to the bit we love the most - if you’re air frying with this appliance then expect to use up to 75% less oil. The Ninja Foodi is therefore perfect if you’re looking for a gadget that can help you eat sooner rather than later, but more healthily into the bargain.

The Ninja Foodi will certainly do the work of several other kitchen appliances, although it’s bulkier than you might expect and that could be an issue if you’re short on space. On the plus side, it’s dishwasher safe, so keeping it clean should be easy too.