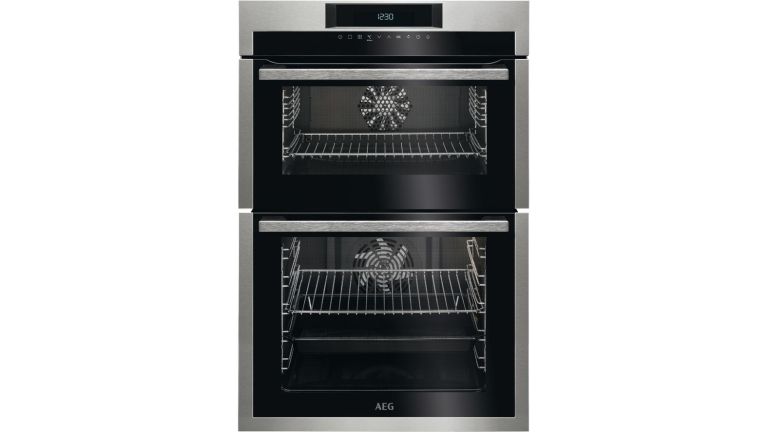 There are plenty of great ovens to buy – as witnessed in our Best Oven top 10 no less – but our top pick if you have a large family, entertain a lot, or just like hoarding meals,  is the AEG DCE731110M. The reason being it’s a double oven, which means you get two fans for the price of one, but in a slightly smaller space. And, for anyone with mouths to feed that makes this fan-assisted tech feast a must-have.

John Lewis also throws in its usual 2-year warranty and you can add 5 years 'added care' for £80. Please note that the AO deal below is on the wrong model, and has expired anyway – a temporary price widget fault, apologies.

While the AEG DCE731110M is big on space thanks to a whopping combined 104 litres of the stuff, it’s also big on power with an electricity loading capacity of 5.8kW. That said, if you’re using both ovens to the max then expect less than frugal operating costs. However, the AEG does come with an energy rating of A, so it’s still efficient.

But it’s that space element that really helps anyone out with large cooking tasks. The lower, bottom half 61 litre area makes an ideal home for large birds, meat joints and what not while the upper oven delivers 43 litres of cooking space for smaller, less challenging dishes.

There’s an electric grill up top too. Cooking quality-wise the AEG DCE731110M employs a combination of hot air from the fans and conventional heating to produce a powerful though evenly distributed delivery.

And for that it gets praise from most who use it, particularly when it comes to making minor adjustments so you don’t destroy more delicate culinary items such as sponges or meringues. The other bonus point comes from the speedy way the AEG DCE731110M heats up from scratch. For the time poor it’s right on the money.

Controlling features and functions is done via the touch panel under the time display and it’s beautifully simple and straightforward to use. This in turn sits within a stainless steel shell that is cool to look at but can be easily wiped over too in order to preserve its lustre. So we reckon it’s pretty low maintenance.

And fear not about the thought of keeping two ovens dirt free instead of one as this is a catalytic self-cleaning machine, which means that most if not all waste residues and grease stains are sent packing without the need for a single Brillo pad. Always a bonus.