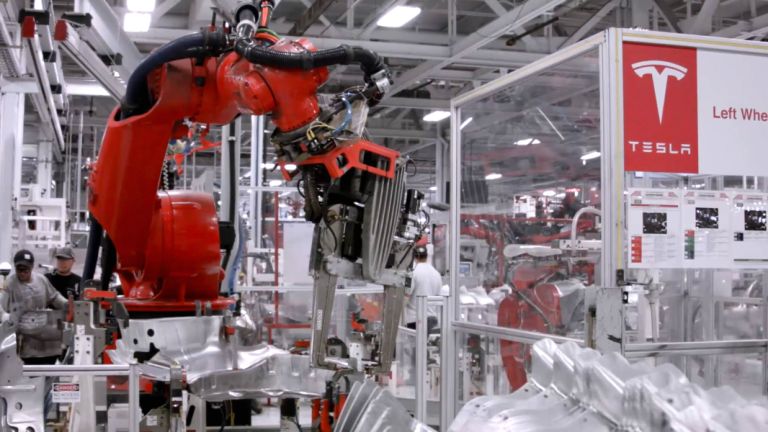 The Tesla factory in Fremont, California is big. In fact, it's so big that if you're lucky enough to be invited there you won't get through much shoe leather. You will, however, get a sore posterior because you'll spend much of your time touring the 370-acre megafactory on an electric train. Ironically, this isn't made by Tesla, but then a lot of the tools and technology that are used to manufacture Tesla cars come from elsewhere.

And, while Tesla might be known for its premium all-electric motor cars, with the Model S being the most prominent example you're currently likely to see, the company knows how to spot and drive a hard bargain. The huge factory itself that covers over 5.3 million square feet of manufacturing space was acquired for peanuts, relatively speaking. Tesla paid Toyota just $42 million for the plant back in 2010, even though it had a value in the region of $1.3 billion.

Head around the enormous factory and you'll see multiple examples of this frugal approach to car manufacturing. Currently, the production line can turn out around 1,000 of the Model S each week, but the layout is designed to be fluid. This is to accommodate new models, such as the Model X SUV, with the chassis for both models being produced on one line. Much of the equipment needed to do this has been purloined from other sources. Case in point is the press found just after you pass by the huge aluminium coils that get fed into it.

This vast machine was valued at between 7 and 10 million dollars, but Tesla purchased it from Toyota for $250,000. Close by, there is the Schuler Press, which is the largest hydraulic press in North America, stands 7 stories tall and can produce a maximum force of 4,500 tons. Tesla got this baby, which was valued at $50 million, from a bankrupt trucking company in Detroit for $4 million, although had to spend the same amount again in order to get it transported to the Fremont site.

Despite the plastic feel of interiors Tesla remains commited to quality

Tesla reckons that it has the capacity to produce some 90% of the interior and exterior trim thanks to eight injection moulding machines on site. Robots, meanwhile, are as you'd expect, the most common sight along the way. German-made Kuka and Japanese Fanuc are the main brands you'll see here, and they too have been chosen for their flexibility. Some can carry out up to five tasks, such as moving parts, riveting, welding and flo drilling, all of which means that Tesla can remain as efficient as possible.

Despite all the high-tech machinery, many humans still work to assemble each vehicle

That said, the human element at the factory is large, although our guide says the company does not have an exact figure on just how many employees work at the Fremont site. This slightly odd fact is the only vague point during the tour though, where the construction of multiple model variants appears to tick over with clockwork precision. Paint, for example, is a meticulous five-step process that includes a pre-treatment, an electrocoat, primer, base coat all topped off with a clearcoat.

Certain machines are named after comic book characters such as Wolverine

Nevertheless, while the efficiency levels are high here, quality is also of paramount importance. That five-step paint job, for example, gets treated to a wet hand sand and seal at the end of the process, which is a slightly labour-intensive step that seems almost at odds with the Tesla philosophy. After that, it's on to final assembly, where a collection of robots with Marvel comic book names, such as Wolverine, Cyclops and Nightcrawler all do their thing. The latter lifts almost finished cars up and onto an overhead carrier where final trim such as instrument panels and glass are fitted.

Central to the production process is the battery installation. These are being produced at Tesla's new Gigafactory, which has recently been completed near Reno in Nevada. As we trundle past some 28 bolts fasten the huge slab of power into the bottom of a Model S once the suspension and drivetrain have been secured. Final trim details, such as the seats, which are made for the company by Futuris, are subsequently added before each and every car goes onwards for a series of tests during the end of line inspection.

When our little electric train comes to rest back where we started the guide is keen to add just how much automotive history is associated with the Fremont plant. General Motors opened the manufacturing facility back in 1962 and it stayed that way through thick and thin until 1982. This place was home to classic models, such as the Pontiac GTO and Chevrolet El Camino. However, it's also home to many ghosts from the past too, with the main one being just how inefficient things had become by the eighties.

The company also has a research facility in nearby Silicon Valley

When the factory reopened in 1984 as NUMMI (New United Motor Manufacturing, Inc.) in a collaboration between GM and Toyota, the aim was for mutual benefit. Toyota wanted a valuable US manufacturing presence and GM was keen to find out more about Japanese efficiency and quality control. In the end though, GM filed for bankruptcy in 2008 and the economic crisis at the time was the final nail in the coffin. Elon Musk, Tesla founder, on the other hand, had already spotted his first opportunity and the electric car maker has never looked back since.