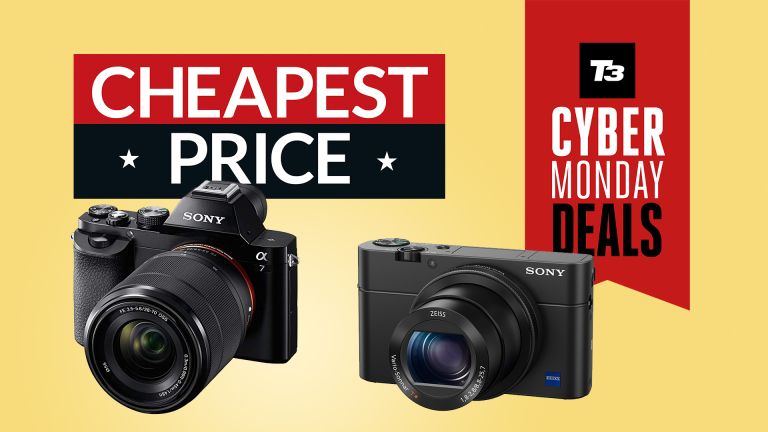 This includes Sony's a7 mirrorless camera, giving you DSLR-like image capability in a much smaller body, plus the RX100 compact, which is full of pro features and takes shots that look like they came from a camera many times the size.

In both cases, the cameras are slightly older versions of models that have had updates since, but those newer versions will cost you several times what these are going for now, and these will both take fantastic shots for the money.

The RX100 is an unbelievably powerful compact camera – really, it's just a mid-sized mirrorless that has somehow been squeezed into a compact body. That makes it pretty damn expensive full price (as in: £1,000), but the RX100 IV is now just £439. If you're looking for a compact travel camera you can stuff in a pocket, but that takes pictures that look like they came from something beefier, you're unlikely to find a better-value option.

The Sony a7 is a true mirrorless camera, which means it's bigger than the RX100 and has an even better sensor, and can fit in many more controls plus a stronger grip for shooting in all conditions. With an RRP of £1,509 cut down to £599 here, and with full compatibility with Sony's lenses (and a very handy 28-70mm kit lens in that price), it's an incredibly versatile buy – powerful and flexible, without weighing you down.

Sony a7K ILCE7KB.CE camera w/ 28-70 mm lens | Was £799 | Now £599 at Amazon UK
This fantastic mirrorless camera has an RRP of over £1,500, though had recently been available at £799. At £599, it's better value than ever. A 24-megapixel sensor piles in the detail and dynamic range, all in a body that doesn't skimp on controls and features, including a tiltable display and OLED electronic viewfinder. It also comes with an unusually versatile kit lens for zoom length. This deals ends at 11.59 on December 2nd, so don't delay!View Deal

Sony RX100 IV compact camera | Was £549 | Now £439 at Amazon UK
Sony's legendarily powerful compact camera had an RRP of £1,000, making this doubly-reduced price a stonker. The 20-megapixel sensor is much larger than a standard compact camera's, giving sharper, less noisy and more vibrant images – more like a mirrorless. To help with getting the best shots, it also has a viewfinder packed into its tiny body, as well as 180-degree flippable screen. The 24-70mm lens helps make it super-versatile, and there's even 4K video recording. This deals ends at 11.59 on December 2nd, so don't wait!View Deal