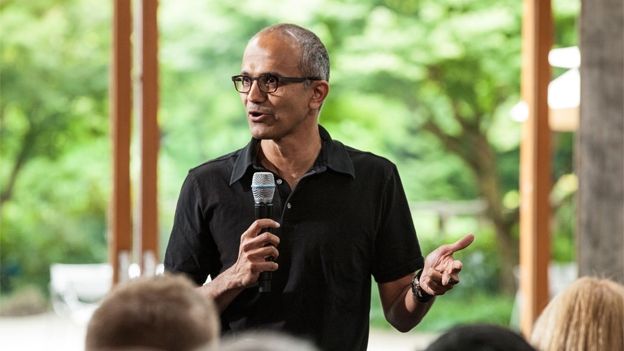 Satya Nadella might just be the coolest guy you'd never heard of prior to this week. For starters he likes cricket – already a huge win over previous CEO Steve Ballmer, who bore the demeanour of a man who not only didn't like cricket, but also had no idea of what it even was.

Secondly he's a man who understands that Microsoft has been dragging its heels competing with the all-in-one services that Google and Apple have been throwing in our faces since some godawful person started calling connected services “the cloud”.

With Nadella's move up to the Big Chair, Ben Furfie's Opinion piece for us last week has proved to be eerily prescient, to the point where I think he may be a witch who should be crushed to death under stones. Because Satya Nadella IS the guy who looked to Microsoft's future while most of its execs wondered and fretted over how they could make Office more annoying to use, and how to get it onto all the world's devices apart from the ones that were selling really well, such as iPads, Nexus tablets and Kindles. He was the driver of the cloud-based storage system formerly known as SkyDrive, as well as Xbox Live, the first and best widespread multiplayer service for console. He was also the prime mover behind Bing, and that's no bad thing either.

It seems Nadella's work-hard ethic is matched only by his passion for cricket, innovation and building new things. This trait becomes instantly apparent when you discover that Nadella's rise has been, not through the business side, but through cutting his teeth as an R&D exec at the Big M, as nobody calls it.

After a stint at R&D he became head of Server & Tools in 2011. Originally tasked with the mind-numbing task of managing Windows Server, Nadella ended up leading the creation of Azure, Microsoft's cloud service which would contain the soon-to-be-huge Xbox Live, SkyDrive and Bing. His tenure was a success, with the division's revenues building to over $20bn from $16bn when he first started.

From there he took a more central role in Bing. Bing might not have the popularity that Google does but Bing is now on every Window's Phone and if rumours are true will become the foundation for Microsoft's voice-activated assistant “Cortana”. It also doesn't track and harry you in the egregious way that Google's search engine does.

Still not convinced? Did I mention he likes cricket? Well he don't just like cricket. He love it! He played it competitively for his school whilst growing up in Hyderabad, India. From there he went on to do the things CEOs of tech companies tend to do – studying hard degrees and then doing three others on their weekends.

If you're still wondering why all this is so important then cast your mind back to Microsoft's two previous CEOs. At least half of them were geniuses who nonetheless missed something, and that was the ability to change. Nadella couldn't be further from that. For a man that enjoys watching a game that lasts actual days he's ruthlessly unsentimental about being fast-paced and evolutionary –more of a T20 man.

His opening statement to the company says it all: “Our industry does not respect tradition. It only respects innovation,” he says. “The opportunity ahead for Microsoft is vast, but to seize it, we must move faster, focus and continue to transform.”

In one sentence he has outlined a vision that promises more products and better services, delivered at a speed and quality that can compete with Apple and Google. Now that sounds like an innings worth watching.