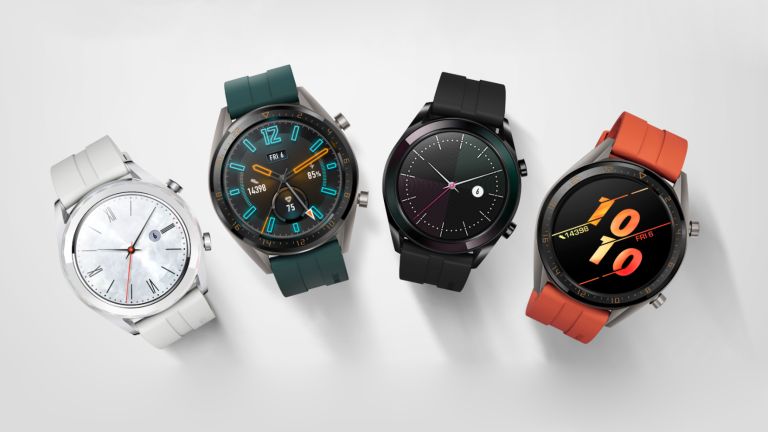 It looks like the new Samsung Galaxy Watch Active 2 already has itself a rival, as the Huawei Watch GT 2 leaks online.

The new watch is not only Huawei's latest wearable, but it could be the company's first smartwatch to run its new HarmonyOS software. If this is the case, then you can forget about the Watch GT 2 having any Google software, apps or services installed out of the box.

Nevertheless, the leaked press images, which were first published by WinFuture, suggest smartwatch fans are in for a treat.

The images show a pair of new Huawei smartwatches. One looks to be a sportier option with a black rubber strap, while the other goes for a more classical design, featuring a stainless steel case and smart brown leather strap.

Both have a circular display with push buttons at two and four o'clock, and both also feature a 24-hour scale etched into their bezels.

The leaked press images show a complication-packed face on the sportier watch, complete with step count, heart rate, weather and temperature, date, day of the week, and of course the time.

Meanwhile, the classically styled Huawei Watch GT 2 features a more traditional watch face, albeit still showing the time, day and date, plus a second time zone, step count and calories burned on three circular complications laid out like a chronograph.

WinFutures claims the new Huawei Watch GT 2 will have a larger 445 mAh battery compared to its predecessor. It is also claimed the watch has a speaker and microphone, suggesting that phone calls will be possible. However, it isn't yet clear if calls can only be made over a Bluetooth connection with your smartphone, or if Huawei will offer an LTE version of the Watch GT 2 with its own 4G connection.

On the back, we can see the watch has an optical heart rate monitor, although there is no word yet on the Huawei Watch GT 2 getting an ECG app to rival the Apple Watch Series 4 and Samsung Galaxy Watch Active2.

It is likely that Huawei will announce the Watch GT 2 either at the IFA technology show in Berlin this week, or at the launch of its Mate 30 and Mate 30 Pro smartphones in Munich on September 19.