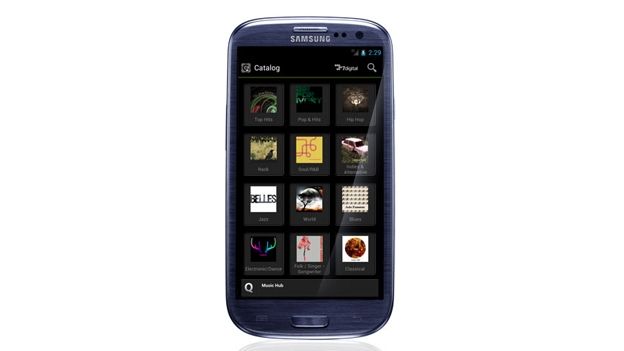 Having launched its Music Hub service this week, Samsung has laid down the gauntlet to rivals, and claims the music industry wants a service that can effectively rival iTunes.

The music service has an impressive 19 million songs under its belt.

Currently its on the flagship Galaxy S3, but will be available on other Galaxy models such as the Note, as well as smart TVs, speaker docks, and even refrigerators.

There are also plans in the works to roll it out to other smartphone operating systems and non-Samsung handsets.

The service looks to compete not just with iTunes, but with streaming services like Spotify and online radio stations like last.fm.

Music Hub gives consumers the choice of two options. The first is free and gives users access to 7digital's library of tracks, letting them purchase music which is then stored in the cloud and will be available on all compatible devices.

The music can then be downloaded into offline playlists whenever you want.

The second option is the Premium subscription which costs £9.99 a month and offers a Spotify-style streaming service, letting you stream any of the millions of tracks in the Music Hub library. You'll also have access to exclusive radio stations and a more personalised experience.

We asked Daren Tsui, founder and CEO of mSpot (a subsidiary of Samsung which developed the Music Hub) how the Korean giant was going to manage to fight a war on multiple fronts.

“There are areas that we feel that we have an unfair advantage, one is that because now we are part of Samsung we are going to work to make the hardware seamlessly integrated with the software, so play controls on the phone, headsets that can also wake up the application, etc.

iTunes has been in the market a long time, and has cultivated the crucial links needed with the music industry. However according to Tsui the music labels are jumping at the chance to work with another player, and have had enough of iTunes being so dominant.

“Right now, the problem is that you have one dominant player in the market and so they are dictating terms essentially, so we're going to hopefully change that. And by the way the labels love that.

"So in terms of economics and relationships with all the various content owners, we're going to be able to match iTunes. Right now we are already at 19 million songs in our database which is pretty large, I'm not quite sure where Apple is, I'll bet you that if we are not the same then we are pretty darn close.

"In regards to getting some of the, exclusive content, we've spoken to some of the major labels, they are very enthusiastic about this service, they are looking for other services which can rival iTunes to be honest, and they have already talked to us about doing exclusive content, promotions and marketing and so forth – so I am very confident that we are going to be able to compete with Apple in that regard.”

And in case you were in any doubt, the service absolutely has its sights set on spreading Music Hub out to the wider world.

“We can be the dominant Android music provider. But again we don't want to stop at Android – so we're talking about the whole entire pie now, not just a slip.”