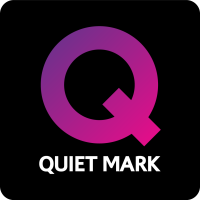 If you're shopping for a fan, one of the most important features it can have is to be quiet. Or, at least, to not sound like a B52 bomber taking off. Now, admittedly the weather right now – at least in the UK where I'm based – probably calls for heating more than cooling. However, temperatures are sure to rise again soon – surely? – and you're always better off shopping for fans when it isn't boiling hot, so you are all ready for when things get balmy again.

Quiet Mark knows a thing or two about keeping the peace. It tests hundreds of products each year– using decibel meters, a carefully calibrated testing space and some highly complex procedures – and gives only a select handful its Quiet Mark award. It's like a sort of Simon Cowell of judging quietness, only Quiet Mark probably does not insult products and make them cry or say things like 'I don't like the quietness of this product… I love it!'

Anyway, the consumer experts at Quiet Mark have judged a large number of fans and chosen their low-volume heroes. We were pleased to see that several of our favourites made the cut. Which would you buy?

We love this – we love all MeacoFans, in fact. One big reason for that is the surprisingly small  amount of noise it makes, despite putting out a veritable gale of cooling air. Another fan with multi-directional oscillation – take that, Dyson! – the MeacoFan doesn't just move air around the room, it bounces it off walls and ceilings, so the whole room feels the benefit. A timer powers the fan down as you drift off to slumber.

The Quiet Mark has also been awarded to the pedestal version of the 1056 as well as the MeacoFan 360 and 650.

Quiet Marks have been given to most of the Dyson fan and air purifier ranges, but this personal fan is particularly quiet because it's intended to be placed near you, to cool you personally. Obviously if it sounded like an attack helicopter, that would not work very well. A filter also purifies the air that's blown your way, as an additional bonus, removing 99.95% of allergens from the air.

One fan that doesn't have a Quiet Mark yet is the Dyson Pure Hot+Cool Formaldehyde. However, I can vouch for the quietness of that one as I've been using it non-stop for the past six months.

We haven't added it to the guide yet, but we've been testing a Whisper Flex for a while now and we can say that it lives up to its name. It's an extremely versatile fan, as it comes with parts that let you construct it as a pedestal or desk fan, and there are 26 speed settings. You have the option of powering it from a battery pack (sold separately) instead of the mains. It's also got both horizontal and vertical oscillation. Take that, Dyson!

Via your phone and the Duux app, you can control the fan from anywhere despite being a highly effective air-mover, it's also a very quiet one. A 'sleep' mode takes the already low volume down a further few notches.

Again, Quiet Mark certification here ensures that 'the noise level is not only quiet, but the frequency doesn’t shift in ways that will irritate your eardrums.' With 3 fan modes – Normal, Nature and Sleep – it's a fan for all seasons. Quite attractive too, as fans go.

Quiet Mark describes this tower fan with 5 cooling settings as 'elegant', which is perhaps pushing it a bit. It looks like an absolutely enormous joystick to me. The speed settings range from 'whisper quiet' to 'turbo' – it should be noted that even the quietest fan is going to make a certain amount of noise once you whack it all the way up to max.

Another classic-looking pedestal fan – or 'boring-looking' if we're being picky – this one from NSAuk can be run via the mains or a USB battery. That means you can take it around the house with you, or even into the garden, should you so wish. With 32 speeds, 3 fan modes a 15-hour timer and  horizontal oscillation from 30º to 120º, this one is Quiet Mark accredited 'due to its ultra-quiet operation from the energy efficient DC motor which in turn, saves around 70% on running costs compared to a similar fan with a traditional AC motor.' So there you go.

Another battery-powered fan, this 5-inch one is clearly rather more portable than the above. Quiet Mark says it's also one of the quietest cooling fans on the market. The battery is charged via USB and can run for up to 15 hours on a single charge. Crank it up to the highest of its 4 speed settings and that run time will diminish, of course.

Duncan has been writing about tech for almost 15 years and fitness ever since he became middle aged and realised he could no longer rely solely on his boyish good looks. He used to be on telly loads, but an unfortunate incident put a stop to that, so he now largely contents himself with telling people, "I used to be on the TV, you know."
Pre-lockdown Duncan was widely regarded as the best-dressed man ever to work for T3 – admittedly not saying much. Post-lockdown he is looking forward to wearing clothes other than shorts and hoodies again very soon, assuming he can still fit into them. He currently writes about cycling, fitness tech that isn’t too heavy, and all things kitchen and home related.