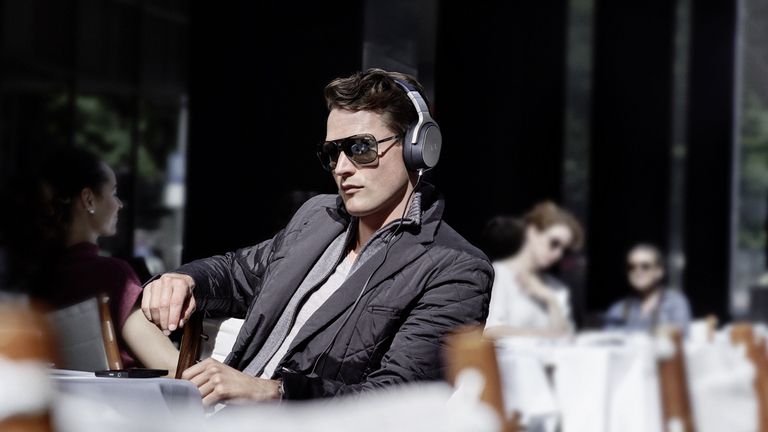 German brand Porsche Design knows all there is to know about selling high quality designer goods to well healed Europeans, often via shops in airports.

Put the two together and what do you get? Some truly stellar noise-cancelling over-ear headphones, in-ear Bluetooth sports headphones, and a Bluetooth speaker, all in tasteful and expensive shades of metallic grey. Which you'll probably soon be able to buy in airport shops, along with similarly chic luggage, Aviator-style sunglasses, and cufflinks.

The launch was in Munich during Oktoberfest, but there were no burly men in lederhosen to be found here (although there were pints of lager in elaborate, ceramic steins). Instead, the men looked like boy band members, dressed as very sporty ninjas.

Porsche Design is pretty canny when it comes to selecting expert partners for collaborations. The futuristic PE kit this guy's wearing was made in association with Adidas, and for its latest audio venture, it's gone with KEF.

Although slightly confusingly, the brands have actually collaborated before on the likes of KEF's M500 headphones. It's just on previous occasions, KEF's name was much bigger on the box, and the aesthetics were less obviously Porsche-like. Not so, this time.

Porsche Design's 'look' can be summed up as, "any colour you like so long as it's black or grey, and preferably metallic." It's very Euro, very chic, very cool-verging-on-cold. The resuits here look great, with the possible exception of the in-ears. More importantly, they all sound pretty ace too.

First up, there's the Space One noise-cancelling headphones. It's a little unfair to do a proper comparison as I only had a 10-minute spin on these, but what the hell: I'm going to say they look, sound and feel better than the Bose QuietComfort QC35 noise-cancellers.

However, they also cost far more, at £370 compared to £289, and are permanently wired rather than offering Bluetooth connectivity like Bose's headphones. Overall then, it's hard to say which is the better product.

As with all these devices, the pricing here is very much "luxury designer goods" rather than "mid- to high-end audio product". Exacting that premium from its clientele is Porsche Design's great skill, you see.

* The best over-ear headphones, according to us.

I've been using these wireless in-ear sports headphones for the last week and have reached two conclusions: that they sound amazing for a pair of Bluetooth headphones, but that the look is actually a bit lacking. They photograph pretty well, but they just look a bit wrong when you're actually wearing the buggers.

The currently trending "neckband" style of exercise headphone is hard to pull off at the best of times, but the excessive size of band and length of the wired portion, plus the fact that PD has chosen to use a slightly suspect, rather wobbly, rubbery material for it, means this is so not a hot look, right now.

It also feels weird when you're running, as it bounces about, and then it dangles down like some kind of unsightly, alien necklace when you don't have the tips in your ears. Because it's on a whopping great, rubberised Alice band, you can't really shove it in your pocket, either.

However, there are two major league saving graces here. First up, the audio is exceptional for a Bluetooth device, especially once I'd added a pair of comply tips (the squashy ones that are like earplugs).

Also, rather brilliantly, if you really don't like the neckband, you can actually unscrew the tips from it and replace it with a good, old-fashioned wired connection. Admittedly losing the Bluetooth does mean you're throwing the convenience baby out with the style bathwater, but it's clever design, and good to have the option.

The Motion One is water resistant, and offers a fairly reasonable 10 hours of music per charge. Finally, there's a carefully calibrated pivot mechanism where the cable enters the earpiece. I honestly have no idea what the point of that is - supposedly it's to make it easier to run the cable over the top of your ears, but what's difficult about that? However, it is a nice bit of engineering, and the kind of touch you might want if you're bunging a not insubstantial £220 on a pair of headphones.

• These are the current best running headphones

Last, and possibly least, there's this Apt-X Bluetooth speaker. It's very attractive in a sinister monolith sort of way and sounded just fine from the brief demo in a crowded room that I got with it.

However, with the Bluetooth speaker market utterly over-saturated, it may need more than dual drivers firing up and down (the downwards one's sound slips out via a port in the bottom) to entice you to spend £330 on the Gravity One. Apart from anything else, you can get Kef's own, excellent Muo for £260 odd, if you shop around.

Even so, a sexy thing, for sure.

• The very cream of the Bluetooth speaker crop.