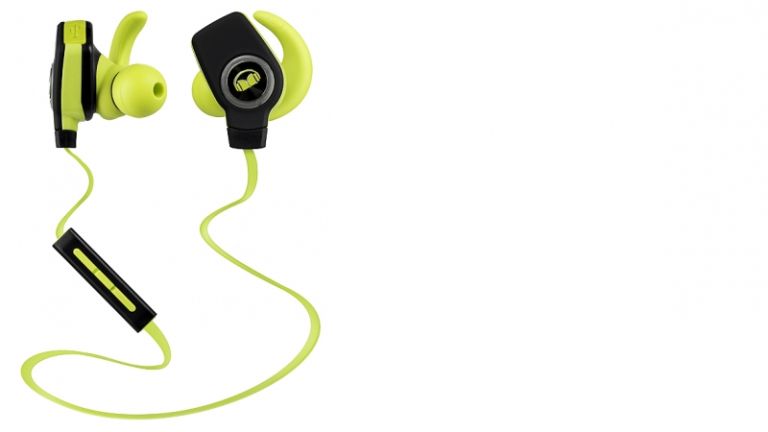 Look at this idiot. He's not paying attention to traffic because he has earphones in. His bike position suggests he's turning left, yet there's NO hand signal, and his glasses are both on his helmet and upside down. Pfftht.

However, none of this matters since there is no traffic, and he's also wearing the world's slimmest wireless earphones. Though clearly that's in terms of the bit that protrudes from your ear rather than the cable, which is seemingly as thick as a small man's little finger, and hi-viz yellow to boot.

The low profile is thanks to an ultra-compact battery and circuitry that's "folded" into the space, so they sit nearly flush to your canals and, thusly, you can wear a helmet over them, for instance. They also maintain Monster's usual excellence in this field, with splendid sound - there's both aptX and AAC support for better audio across Android and Apple devices -good in-ear purchase so they don't fall out as you "pull a 360" or climb up a big rock, like so:

Ultra-lightweight, with a "patented ear hook" and angled ear tip for a secure and comfortable fit, they're also water-resistant, sweat-proof, antimicrobial and washable. A built-in mic and buttons mean it can work with your phone and control your music, too. Oh and that ultra-compact battery nonetheless lasts for "over five hours" per charge.

The cost of this rugged yellow slimness and audio splendour? £129.95 to you, mate.

If you're not so fussed about aural slimness - perhaps you are poor, or have absolutely freakishly huge ears - there's also the Monster iSport Wireless at £79.95.

Or if you're in the market for a pair of sporty on-ears in "Business Black" (or "black", as we call it), there's this, the iSport Freedom. Monster says they're "for active people who prefer the feel and performance of on-ear headphones to in-ear models." We'd say they're more for people who have fallen on their head while mountain biking a few too many times, and lost all aesthetic judgement, but maybe that's just us. £229.95.