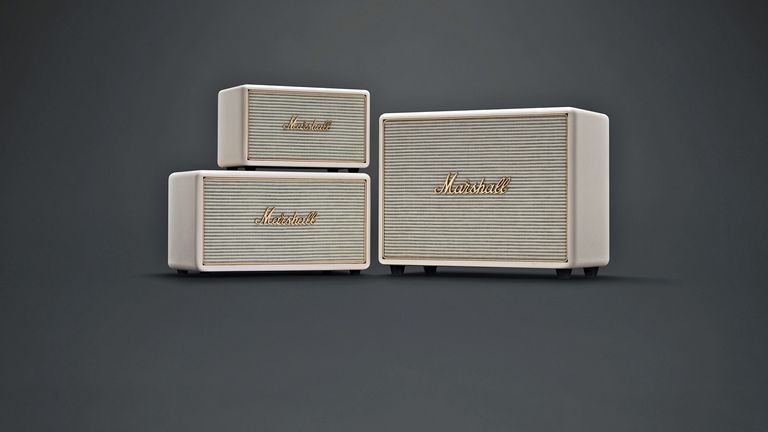 Marshall makes some of the world's best amplifiers for rock gigs, and it's also carved out a decent niche in the hotly-fought headphone and Bluetooth speaker markets. Woooooah yeah!

Marshall's consumer audio products have a slightly bad reputation, as some people who are fans of the brand's concert gear feel that they're made to lower quality standards, by third parties.

Well, of course they are. Duh.

The fact is, within the cost constraints imposed by the consumer market, some excellent headphones and Bluetooth speakers have come out under the Marshall banner. That's particularly true if you're into rock, rap and anything with a bit of oomph. The very distinctive, retro-rocker styling means they stand out a mile visually, too.

From what I've heard of the mid-size Stanmore so far, this follows in the usual Marshall vein, with a sound tuned for maximum attack (with a nicely done, faux-analogue kind of atmos), and volume that quite literally goes up to 11. Guitar-amp-style bass and treble knobs allow for further sonic tinkering.

The multi-room works really well because it's the exact same system used on these Urbanears speakers – because, despite the very different, hipster styling, they're actually produced by the same team.

That means not only can you use AirPlay, Google Chromecast or Spotify Connect with these things, you can also use the Marshall app – or press a button on the speaker – to instantly link together multiple speakers.

There's also a 3.5mm line in and – on the Stanmore and Woburn – even a proper, phono one. You can plug in a (line level) turntable or other input and then multi-room that around your home. There's also a potentially very handy knob to switch between 7 presets; either Spotify playlists or web radio stations can be assigned.

Clearly, if you're not into the look of Marshall's speakers, the tech cleverness and very decent (and loud) audio will count for nought, but for those about to ROCK (in multiple rooms of you abode, via Wi-Fi), we salute you.