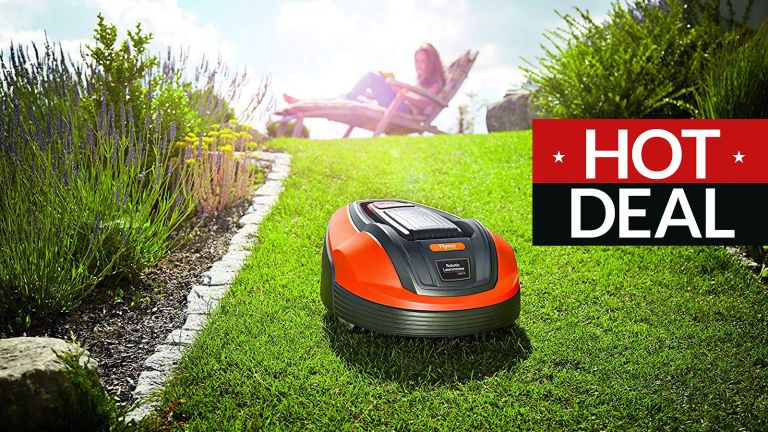 Flymo 1200R Robot Mower | £469.99 | Was £998.40 | Save 53%
Despite being a Flymo, the 1200R robo mower disappointingly does not hover. Despite that, it does make a suitably splendid of keeping your grass trim in a futuristic manner. Unlike a standard lawn mower, you use robots such as this every day, so it is cutting 'little but often'. You'll need to hammer in a wire guide around the edge of your turf, to stop the 1200R from menacing your prize rhododendrons; after that you're good to go. Collision sensors prevent it from eating your pets. You don't even need to empty a cuttings bin, because grass is sliced minutely and deposited back into the soil as fertiliser.View Deal

This is an Amazon Deal of the Day, so you only have today to take advantage of it.

We sometimes have products we like a lot and then look on Amazon and find people queuing up to say how crap it is, but that is not the case with the Flymo 1200R robot mower. Of 258 reviews, 78% are the full five stars and the average rating is 4.5. Yes there are a few reviews saying 'unreliable junk' and 'I stood and watched it mow for 2 hours, it was very slow', but I think the people have spoken on this one: the Flymo is a quality mower.

Some of the negative reviews are due to misunderstandings about how to use the Flymo 1200R. It's not suitable for long grass, it's for keeping your lawn maintained, so you will probably have to start the summer off by using a standard mower to get it down to a maintainable length.

You also shouldn't under any circumstances stand and watch it, or you'll be driven mad by its slow and seemingly haphazard progress. Or, as Flymo puts it, the machine 'Mows in an irregular pattern, ensuring all areas are covered.' That means you won't get stripes, of course. It's suitable for lawns up to 400 metres square.

Left to its own devices and used frequently, the 1200R will keep your lawn in perfect condition with minimal input required from yourself – so you can get on with having a barbecue, or doing some spring time DIY.