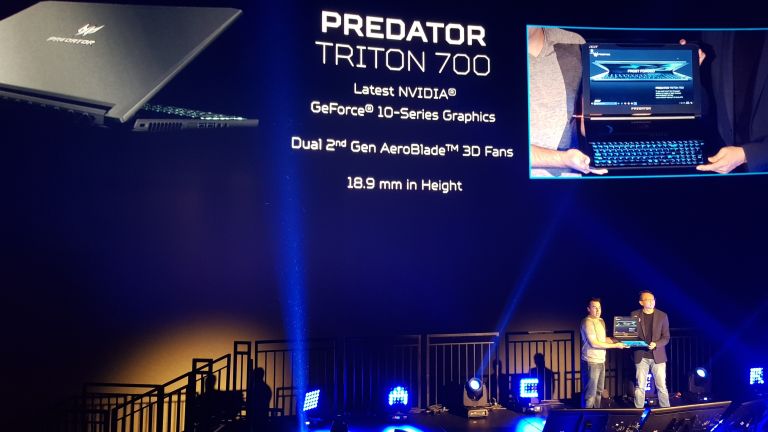 A new version of Acer’s AeroBlade 3D metal fan – enabling a 35 percent increase in airflow – means that the new 18mm thick 15.6-inch Predator Triton 700 can feature top spec overclockable hardware from Nvidia and Intel as they take up less physical room within the laptop. We’ve seen the Triton 700 and it is impressive in the flesh.

There’s also a new gaming laptop for more casual gamers – the Helios 300, available in 15.6 and 17.3-inch versions with various specifications.

Acer is also keenly involved in VR and AR; VR pioneer Mark Bolas, head of Windows Mixed Reality at Microsoft, shared with us on stage how the platform blends physical and digital worlds. By combining the physical universe and the digital universe, based on bits and digital logic, the latter is no longer constrained to computers, phones, and TV screens as it is now.

Developers have been using an Acer development kit for Windows Mixed Reality and the headsets will ship later this year, though there’s no word on how much they will cost.

The Taiwan-based company also launched two new 4K projectors at the event, the H7850 and V785 as well as the new ProDesigner PE320QK 4K LED monitor for creative professionals working with HDR content.