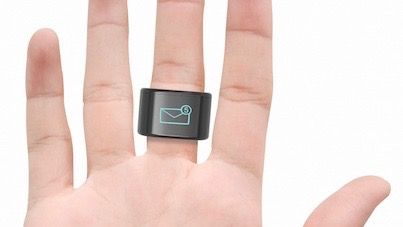 Spend enough time browsing the world of smartwatches and, after a while, wearables can start to look a bit homogenous. When you've seen one Android Wear watch, you've seen them all, right?

Well, hold it right there – there's another side to wearables. The democratisation of crowd-funded platforms like Kickstarter means that just about anything that captures the internet's imagination can, and will, get the backing needed to turn a crazy idea into reality. Wearables don't need Samsung or Google's nod of approval.

There are already dozens of weird and wonderful wearables out there. And while none of them may sell in their millions, there's a little spark of genius in almost every one.

A nice ring to it

This year, we've seen a spate of smart rings, which enable you to perform, on a piece of finger jewellery, the sort of tasks that you'd usually leave to a phone.

Top of the pile is the Logbar Ring ZERO, which attracted almost $900,000 (£580,000) Kickstarter backing. We got to see it in the flesh at the CES 2015 tech conference. Not content with just buzzing you when you get a notification, the Ring ZERO enables you to control other home gadgets, play music and even respond to text messages, all with the waggle of a finger. You literally write out words and draw icons in the air, and an ultra-sensitive motion detector in the ring translates them into actions.

This sort of idea will work better when all of our homes are full of multi-coloured smart lights we can dim and disco-ify with the wave of a hand. But in other ways, it's in tune with what's going on right now: the smart home is happening.

The Ring ZERO also has NFC, enabling you to make wireless payments with a fist-pump at a café's wireless terminal. And it works with both iOS and Android.

MOTA's DOI SmartRing goes a step further by cramming in a screen, telling you to read your notifications. From your finger. Mad, right?

There are much more ambitious ideas than finger-waggle gesture control in the wearable world, though.

How about mind control? We're not talking about wearable headsets that control your thoughts – that's plain creepy – but using your brainwaves to control things in the physical world. Wearable telekinesis, in other words.

But let's burst that X-Men bubble with the Necomimi Brainwave Cat Ears. That's right, these are fluffy cat ears that droop down and perk up depending on your brain activity – or “level of alertness”, as maker NeuroSky tends to calls it. Each ear is controlled by a little motor, reacting to an EEG sensor that rests on your forehead – an electrode that amplifies the signals of your brainwaves. It sounds like science fiction but is actually pure science. These ears predate any of today's smartwatches, too, having been devised in – you guessed it – Japan back in 2011.

A bunch of companies have tried to work this EEG technology into a game controller over the past five years – one of which is NeuroSky, our very own cat-ear peddler. Its $100 (£65) MindWave Mobile EEG headset hooks up to smartphones, including Android and iPhones, as well as PCs. There's already a surprising number of apps and games available for the platform. One highlight is Throw Trucks With Your Mind, a 3D action game in which you throw trucks by concentrating your thoughts. At $75 (£48) for the game alone, it's an expensive gimmick, though.

There are other wearables that use similar sensors to really alter your life, rather than just give you a giggle. Meet neuro:on, a wearable that looks like a sleep mask but actually monitors you as you snooze, to help you switch over to polyphasic sleeping. This is where you sleep for shorter periods a few times a day, rather than the usual six to eight hours at night. The idea is that you'll only need to sleep for two hours a day, enabling you to become super- productive. Or watch loads of films.

It does this with the help of an EEG and other sensors that monitor your eye and muscle movements. Then it wakes you up by simulating dawn with lights inside the mask, when it senses that you're in the right phase of sleep.

If that sounds too much like burning the candle with a flamethrower, you can also use the mask to help you get over jetlag. Or to promote lucid dreaming. That's when you realise you're mid-dream, and can start consciously affecting what you do. Lucid-dreaming wearables were big news in 2012, with the much-hyped but not-that-effective Remee mask. But much more advanced models like the neuro:on and iWinks Aurora are due to start shipping about now. It's time to get your dream on.