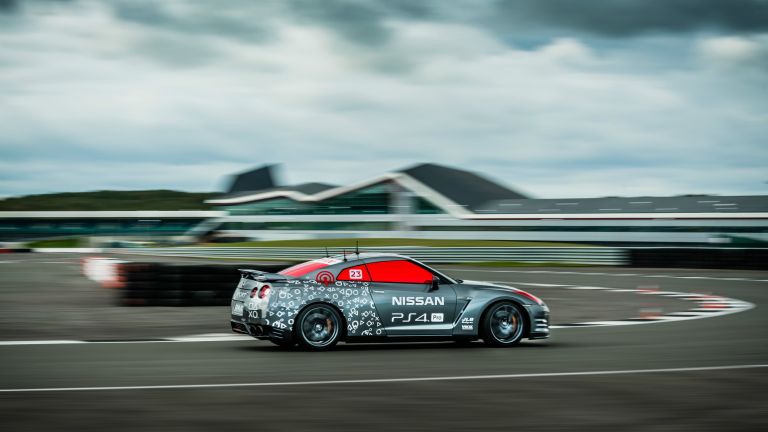 With a new instalment of  Gran Turismo Sport  for the PlayStation 4 just out, Nissan’s latest Adventure day took a bunch of journalists down to the Stowe Apron Building in the middle of Silverstone circuit to showcase its cars and the driving game via a packed agenda. Nissan had already promised much, with an early access play of GT Sport itself, plus first UK drives of the new MY18 370Z and circuit spins with its R34 GT-R and MY17 GT-R NISMO. And, in a neat twist that blurred the line between virtual and reality, there was also the chance to drive a fully remote-controlled R35 GT-R, operated by nothing more than a PS4 controller.

Sitting in a white Nissan Qashqai, acting as the follow car and control centre, the Nissan GT-R/C throbbed into life and, after releasing the brake (left button on the PlayStation 4 DualShock 4 controller) and blipping the throttle (right button) the driverless sports 2+2 moved off and around the first bend with some ‘less-is-more’ movement on the direction joystick.

It was a weird but wonderful experience and you have to stay firmly ‘in the zone’ to avoid running over any of the bollards or, worse still, end up with the car running away with itself. Thanks to a mountain of failsafe systems factored into the build, it’s easy to avoid a scenario where lots of bad things could happen very quickly indeed. A big kill switch on the centre armrest of the Qashqai is the icing on the cake.

More remarkably, the same thing was done on a grander scale by Jan Mardenborough, one of the most successful winners of the GT Academy, Nissan’s innovative driver discovery and development programme. The difference in that scenario was that he did it from a helicopter above Silverstone. The stunt, using the same car engineered in the UK by JLB Design Ltd, was organised to celebrate 20 years of Nissan involvement in the Gran Turismo gaming series. Amazingly, during Mardenborough’s fastest lap of 1:17:47, the GT-R/C averaged 76mph and reached a top speed of 131mph. And all without anyone in the car.

We also got to drive the latest incarnation of Nissan’s hugely successful small car, the Micra. It’s not so small anymore and the version we tested was also fully-loaded with a raft of new safety features and functions, many of which come as standard with the new model. The difference with our track edition was that it had been fitted with plastic rear wheel covers that turned the front-wheel drive car into a drifting dream machine. The aim, after a couple of practices with an instructor, was to get the car around a slalom course as quickly as possible, while preventing the back end from overtaking the front.

It seemed only fitting to go for a big, thick cheeseburger from the lunch menu with a couple of hours of driving those high-protein sports cars for the afternoon activities. As Nissan staff were keen to point out, the R34 GT-R was a prized member of their heritage fleet, resplendent in a eye-catching new blue race car wrap, and needed to be treated with care. However, as a means of seeing how far car design and the technology inside has come, the contrast between that and the MY17 GT-R NISMO was astonishing.

Our warm-up model was the 370Z MY18, which looked super-cool in its new Infra Red metallic paint finish. The base model costs £29,185, the GT version £34,285 while a beefed up Nismo edition will set you back a cool £39, 375. It provided our first introduction to Nissan’s performance models and also let anyone not familiar with the International section of Silverstone to work out where the best and trickiest sections of the track were hiding.

Shortly after, it was the R34 GT-R. Climbing into this classic it’s obvious this is a car that’s nearly two decades old. It feels heavy to the touch and there are some cool but slightly quaint digital instruments in the centre of the dash. The interior feels a little bit, well, lived in. At the same time, however, this is an appearance that lets you know many people have had a great deal of fun driving it over the years. It didn’t disappoint either, although with rain coming down quite steadily it was also a bit of a handful with a tail-happy rear end and brakes that were quite a long way from the phenomenal stopping power of the most recent GTRs.

In the case of the white MY17 GT-R NISMO that meant face-melting performance thanks to the 3.8 litre engine, a set of brake discs like dustbin lids and some of the most sophisticated handling appeal out there. That said, even the ‘standard’ edition, the MY17 GT-R is still a rocket-ship thanks to an almost-as-potent 3.8 litre V6 twin turbo, 570PS engine that propels it to a top speed of 196mph and 0-62 in an eye-watering 2.7 seconds.

Prices start at £82.525 for the Pure edition, while the Track Edition comes in at £94,525, which is a bargain compared to the £151,000+ for the MY17 GT-R NISMO, although that packs 600PS and a feast of small but highly effective tweaks that make it an even more formidable driving machine.

Back in the track building, there was a chance to relive the adrenalin rush of the track and cars with a ten-lap competition race on the PlayStation with a PS4 as the prize. In addition, there was an insight into the meticulous attention paid to driver data, including an overview of VBOX, an in-car package from UK firm Racelogic that monitors every nuance of the track day action. This allows drivers and teams to pick through their performance, and hone future circuit work accordingly.

Unfortunately, for the less fit present, there was also a 12 grand bit of kit that analysed everything about your body and spat out a comprehensive printout at the end of it. It made for grim reading but the data is essential for working out problem areas. If you’re a professional racer then it’ll help you become a winner. If, on the other hand, you’re not and you ate a large burger for your lunch then it just ended up leaving you feeling ever so slightly depressed…