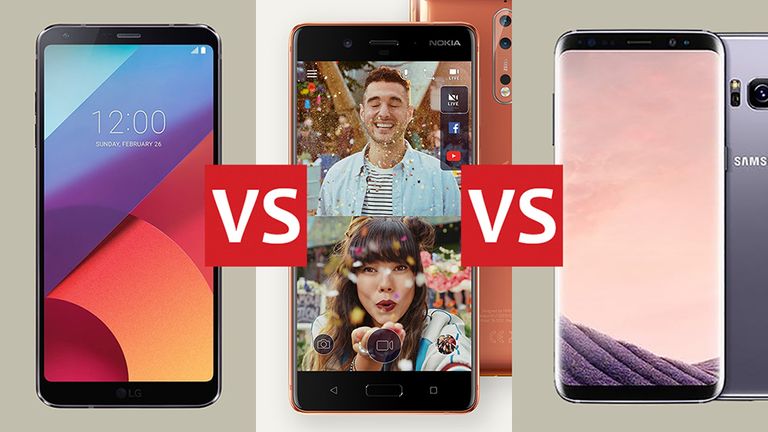 Nokia is well and truly back, under the stewardship of Finnish company HMD Global, and just took the wrappers off its 2017 flagship phone, the Nokia 8. Sentimental nostalgia for the phones of the 1990s and early 2000s aside, is the new handset actually any good?

To help answer that question we've put it up against two of the best phones of 2017 so far, the Samsung Galaxy S8 and the LG G6, to see which one will come out on top. For more on the Nokia 8 phone, check out our hands-on review to see what our first impressions were.

Smartphone beauty (or lack of it) really is a matter of taste, and we'd say these are three very well designed phones. The Nokia 8 does eschew the bezel-free, 18:9 aspect ratio screens favoured by the Samsung and LG phones though, which does make it look a touch more old-fashioned from the front.

The Samsung Galaxy S8 (above) measures 148.9 mm x 68.1 mm x 8 mm, with a 5.8-inch OLED screen, 2960 x 1440 pixel resolution, and a weight of 155 grams. Don't forget the Samsung party trick either, those slightly curved screen edges that add a touch of class to the design and which have been helping to earn the handset some rave reviews.

Finally the dimensions of the LG G6 (above) are 148.9 mm x 71.9 mm x 7.9 mm, it has a 5.7-inch LCD screen with a 2880 x 1440 pixel resolution, and it weighs 163 grams. It's the heaviest of our three phones, but not by any kind of margin that you'll notice. In fact these three phones are almost identical in terms of physical dimensions, though the Samsung model squeezes in more screen space and more pixels.

On to the specs, and obviously there's a lot of ground to cover, so we'll stick to the most important components. The bottom line is that you're not really going to notice a whole lot of difference in the performance of these three handsets - remember though that smoothness of operation isn't just down to internal specs, and we've yet to get the chance to put the Nokia 8 through its paces properly at the time of writing.

The Nokia 8 packs a Snapdragon 835 processor, an Adreno 540 GPU, 4GB of RAM and 64GB of storage which you can expand via microSD card should you so wish. Those are pretty much the top-end specs for flagships in 2017, though they may be bettered by the end of the year by the time the iPhone 8 and the Google Pixel XL 2 have appeared.

As for the Samsung Galaxy S8, it too has a Snapdragon 835 CPU, or the similar Exynos 8895 Samsung chip if you're outside the USA and China. Everything else matches the Nokia 8: the Adreno 540, the 4GB of RAM, and the 64GB of storage space. Again, you can expand the storage with a microSD card if you need to.

The LG G6 has the slightly inferior Snapdragon 821 processor on board, though you're unlikely to notice the difference most of the time in most of your applications. That's combined with an Adreno 530 GPU, 4GB of RAM, and either 32GB, 64GB, or 128GB of storage space, as well as room for a microSD card. If you want to max out on storage at least, the LG G6 is the phone for you.

Where would we be without our phone cameras? We shudder to think, and so rarely think about it. The Nokia and LG phones here take a dual-lens approach to the rear-facing camera, though by all accounts the Samsung Galaxy S8 takes some very good pictures as well, so don't necessarily think two lenses are better than one. In fact it's hard to compare cameras on specs alone, so we'll have to reserve judgement on the Nokia 8 until we can really test it out.

The new Nokia flagship has two 13 MP snappers around the back and one at the front, capable of 4K video recording and "bothie" live streaming - that's a newly made up word that means you can record with both front and rear cameras simultaneously and record or broadcast them in a split-screen view... well, the kids might like it.

The Galaxy S8 has a single 12 MP lens around the back and an 8MP one on the front, and again 4K video recording is possible. As per our review, the S8 is capable of some very impressive snaps, even in low light, despite the fact that the camera was only a very slightly tweaked version of the snapper on board the Galaxy S7 from the year before (something about if it ain't broke...).

As for the LG G6, the phone comes with a dual-lens camera on the back, with both lenses offering 13 MP of photo goodness, and 4K video recording within the handset's capabilities. Around the front there's a 5 MP camera, meanwhile. In our review, we said the phone could churn out some decent-looking images, but it's in the video tweaking where the handset really shines.

Pricing is of course a big factor in any buying decision, and so far we just have one price from Nokia for the Nokia 8's European launch: €599, which works out at £545 or $705 with a rough currency conversion. That's not the most you'll ever pay for an unlocked flagship smartphone, but it's not far off.

Sticking to the euros, the Galaxy S8 originally retailed at €799 unlocked, while the LG G6 was a touch below at €750. Those phones also have official UK and US prices, and have of course had several discounts applied since launch, but we're sticking to one figure to be fair to the Nokia 8 for comparison purposes.

That's maybe one reason to go for the Nokia 8 - it's significantly cheaper, at least in euros. Another might be  that its version of Android is very close to stock, and Nokia (or rather HMD Global) is promising fast and secure updates, something which you're not necessarily guaranteed if you go with Samsung or LG.

In most other departments, the rivals to the Nokia 8 still have the edge, particularly in those gorgeous, 18:9 aspect ratio, bezel-busting displays. It remains to be seen whether the Nokia 8's camera can help it to stand out from the crowd, but right now it seems to be a handset that's competitive, rather than one that blows the competition away.